‘Like a dance’: Diné singer-songwriter aims for stardom, settles for contentment

Inspired by the likes of John Mayer, Jimi Hendrix and The Strokes, Jonathan Dixon began making music to get the attention of a girl he liked. 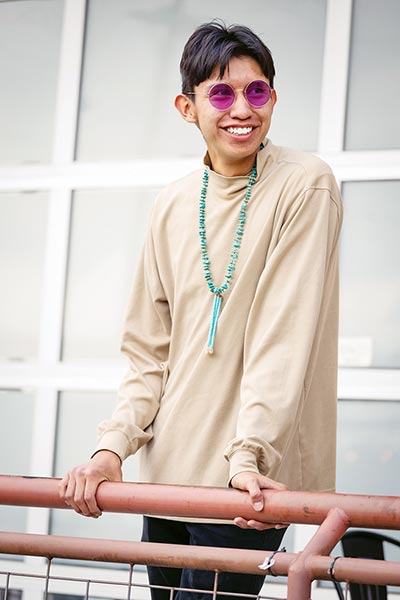 Courtesy photo | Garrett Julian
Jonathan Dixon, 24, also known as Jona Rei, poses in front of the Tractor Brewing Co where he will be performing on April 29 as a part of the Native Guitars Tour: Rising Stars.

“I did it for ego, at first,” he laughs. “I wanted to be liked by girls. I wanted to be seen as this cool guy with the guitar and then I fell in love with music, just learning different songs, different covers I listened to at the time.”

Dixon, 24 and based in Albuquerque, is from Montezuma Creek, Utah.

As a Native artist, Dixon believes his experience is different from anyone else who is not Native due to the way he was raised.

He spoke about the lack of a music scene on the Navajo Reservation and how he had to learn more on his own as opposed to others who grew up in areas like Albuquerque.

“Most of the musicians around here in Albuquerque, they have the whole music scene that they grew up in, they had a bunch of people that were surrounding them, they had a lot of resources around them,” Dixon said.

“Maybe they experienced poverty on the same level as me but I grew up pretty poor on the reservation,” he said.

“I didn’t have a lot,” he said. “I did grow up rich in the sense that I was surrounded by love and family, and I think that really brought me to where I am today.”

Dixon goes by the stage name Jona Rei, which is derived from the Navajo word johanaei.

He decided to base his stage name off “johanaei’” since that was what his grandfather called him as a nickname.

He describes his music as pop with influences from the blues, indie, a little bit of reggae, soul, and R&B while also being rock heavy.

He began recording himself in high school through his iPod touch, then transitioned to Adobe Audition when he started teaching himself to produce and record his own music.

He said he transitioned into songwriting from poem writing he previously did.

“From there, I kind of just started to notice the different aspects that go into a song, such as the lyrics and how they play with the music,” Dixon said.

Dixon said he noticed how the lyrics can differ from the sound of the music. He noticed how some lyrics could be happy, but the song would sound sad.

After high school, Dixon went to college for a year before failing all his classes and moving back in with his parents.

“I had a pretty rough year, and I also wasn’t ready for college then I started to focus on music because it was my saving grace at the time,” he said. “It helped me through some very dark moments where my brain just wouldn’t shut up.”

He used this rough patch in his life to create music, writing from the heart and he stayed on this path.

He was making music every single day and worked heavily on his songwriting. He said he entered a trance and it kept him occupied.

“I wasn’t really trying to be better at anything,” he said. “I was more just trying to get the sounds I heard in my head and translate that to audio and make it sound exactly how I heard it in my head.”

During this time, he began working on an album that would take him approximately one to two years to finish.

“I started to get the basic idea of how I wanted the album to sound and so I just started to organize it a little better,” Dixon said. “Of course, through that whole process I was still teaching myself how to make the quality of the audio sound better and better by watching YouTube tutorials.”

Through these tutorials and googling for advice on the internet, he figured out how to make his album sound the way he wanted and finished with a track list of 14 songs. Finally, he released the album in 2019.

Soon after releasing the album, he went around Albuquerque and played at open mics. He formed a band for a couple months after gaining recognition within the Albuquerque music scene.

He said his ego was inflated during this time and arguments arose within the band, he was not willing to be open to the experience of being in a band. He left the band shortly after.

However, this experience and Dixon becoming a father caused him to grow as an artist.

“In the past couple of years, I have been learning how to shed that (his ego) and so my goals have changed because before it was wanting to be famous, wanting all the girls, that kind of thing, classic Rockstar dream,” Dixon said.

“But now, being a father and seeing the beauty of life and also the beauty of suffering is really important,” he said. “I really just want to be true to the music.”

He said he never wants to feel like he owns anything, and he wants his music to reach a place where it comes through him and his truth.

Fame does not matter to him, like it once did, instead he is content with making and playing his music for enough people to where he can support himself.

At the center of everything, he wants to be a good father to his child.

Dixon encourages Native youth to make music and tells them that if he can learn about it on his own then they can too.

“I would want them (Native youth) to know that they’re not alone, there’s probably a lot of kids in their position,” he said, “in their ref or maybe in another rez.”

Jona Rei will be performing at the Native Guitars Tour: Rising Stars in Albuquerque on April 29 at 7 p.m. located at Tractor Brewing at Wells Park.