Guided by the past: Lakota beadworker campaigns against derogatory name for stitch

Close your eyes and imagine you’re back in time. It’s around 1860 and you’re walking through an encampment of Lakota people. 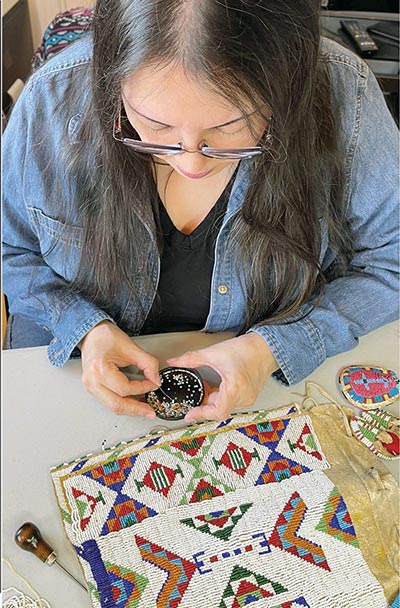 Courtesy photo | Rhonda Holy Bear
Lakota artist Rhonda Holy Bear carries on the work of her ancestors while campaigning to return the name of a beading technique to the Paha Stitch in their honor.

You stop and notice a tent in front of you. Several older and younger women are sitting next to one another around a fire. Each holds leather material and an assortment of colorful beads in their laps.

It’s a meeting of the sacred Lakota beadwork society. Today, the older women are showing the younger ones how to do the apáhaka kagege, the “hump stitch,” which Rhonda Holy Bear said is named after the landscape of rolling hills that surround them.

“To them, the little rows or ridges of beadwork resembled the sacred hills where they lived,” she explained.

Throughout her life, Holy Bear, Lakota, has carried on the knowledge, beauty and artistry of her ancestors. She is known as one of the finest indigenous bead workers in the country.
Her beadwork stands out on elongated dolls of Native women and the leggings, headdresses and blankets of seated, regal chiefs.

She said she makes the figures in the image and spirits of her ancestors who started the Lakota bead worker societies.

“I feel guided by the Lakota Beadwork Society members of the past. They are my spiritual mentors,” she said.

To use the apáhaka kagege, “hump stitch,” the bead worker sewed beads onto natural tanned deerskins with sinew threads stiffened at one end with saliva to form a kind of needle.

Then, they used bone awls to poke holes in the surface of the soft deerskin. Once the sinew dried, the beads stayed in place, according to Holy Bear.

“The beadwork technique has beautiful appearance and drapes over the body with ease of movement. It was a quite a commitment from start to finish,” Holy Bear said.

But despite the artistry and toil of the society, white settlers who began occupying indigenous lands saw the sacred process through a tainted dominating lens of their own and coined the hump stitch, the “lazy squaw stitch.”

According to a press release from the Interior Department, the word “squaw” has been traced to the Algonquian language and meant simply “woman.” But its meaning was skewed by centuries of use by white people.

“The term has historically been used as an offensive ethnic, racial and sexist slur, particularly for Indigenous women,” the Interior Department stated.

Holy Bear added, “Back then, they often called Native women ‘squaws’ and thought of all Natives as ‘lazy people.’

“During that era, it was a form of suppression,” she said, “meant to demean the people.”

Eventually as time went on, the middle word “squaw” was dropped from the derogatory name of the stitch.

One of the last references to lazy squaw stitch, Holy Bear found, was in a University of Montana training manual on “effective teaching of American Indian children” in 1992.

But the word “lazy” was left in place.

“The term ‘lazy stitch’ is (just as) offensive when used to describe our long-venerated bead work technique,” Holy Bear states in an essay on the subject. “This designation implies that our Lakota grandmothers were ‘lazy’ women, who’s artwork was unworthy of respect.”

“In Lakota culture, we never used the term ‘lazy stitch,’” Holy Bear said. “Lakota culture values industriousness. Laziness was never glorified in our daily lives or in our art.

“Our grandmothers beaded with discipline, honor and respect for tradition,” she said. “They never wanted us to forget where we came from or who we are. We are Lakota.”

Wherever the term lazy stitch or its original term lingers, Holy Bear wants it gone. She is on a campaign to eradicate the colonial references and reinstate indigenous language.
She suggests the stitch be called the “Paha Stitch,” meaning Hill Stitch, in the Lakota language.

“Paha Stitch pays tribute to ‘apáhaka kagége,’ the term our grandmothers used,” Holy Bear said. “Their artwork deserves a dignified name which reflects their virtuous values and strong work ethic. They took a lot of pride in the work. In fact, they used to say, ‘We can bead anything, if it will hold still.’”

Holy Bear has been reaching out to museums to help spread her message – the Mitchell Museum in Evanston, Illinois, the Bary Museum in Norfolk, Virginia, and the Brinton Museum in Big Horn, Wyoming, have agreed to do so.

“We (American Indian Advisory Council) were happy to listen to her reasoning and research,” stated Kenneth Schuster, Brinton Museum Head Curator in an email to the Times. “We agree with Rhonda that ‘Paha Stitch’ meaning ‘Hill Stitch’ is a way of honoring the memory of Native women whose work was sacred and in no way deserving of terms which are pejorative to their memory and their culture.”

Holy Bear follows in the footsteps of U.S. Secretary of the Interior Deb Harland who banned the word, “squaw” from federal property. A task force is finding replacement names for 650 valleys, lakes, creeks and other sites on federal lands.

“Racist terms have no place in our vernacular or on our federal lands,” Haaland said in a news release about the change. “Our nation’s lands and waters should be places to celebrate the outdoors and our shared cultural heritage — not to perpetuate the legacies of oppression.”

“I admire Rhonda Holy Bear as an artist for speaking up and showing leadership on this issue,” stated Dine’ educator and curriculum writer Vivian Arviso. “This word, Paha Stitch, gives dignity and celebrates the skill of a beadworker.

“It is clearly racism to me as an educator that Montana schools taught lessons that included the ‘lazy squaw stitch,’” she said. “Words carry meanings and thoughts that tell us how to treat each other. Let’s use words that convey respect and courtesy about our work and each other.”

Now, Holy Bear would like you to open your eyes.

“The term should be changed to Paha Stitch and embraced by all to preserve the true legacy of our Lakota/Plains women,” Holy Bear said. “Their story of reverence and virtue needs to brought forward and elevated to its rightful place in history.”