‘Rainbow of color’: Sihasin single “We the People” goes global 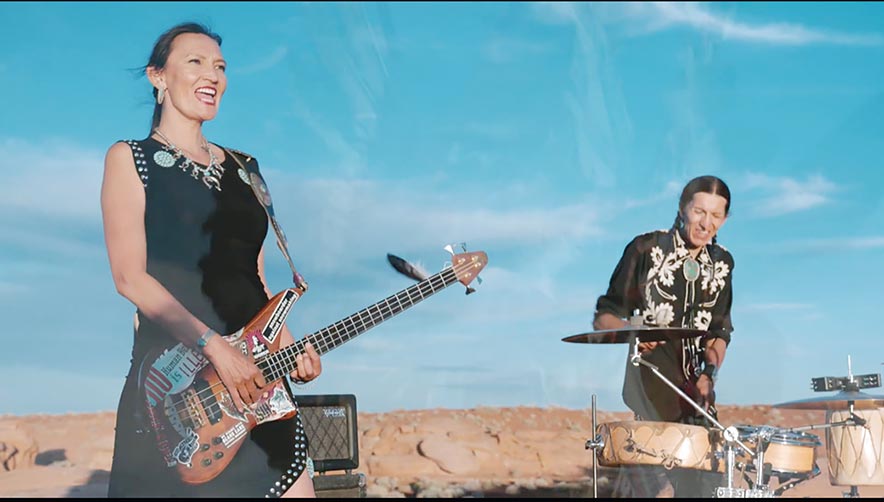 Courtesy photo | Video still by Jake Howard
Jeneda and Clayson Benally rock “We the People” in commemoration of Independence Day in a music video shot in Leupp, Ariz., and shared throughout the world by American Music Abroad.

Known for their advocacy for equality and justice, Jeneda and Clayson Benally of the Diné rock band Sihasin were recently chosen by American Music Abroad to participate in a cultural diplomacy program that connects American musicians with global audiences.

“We are outspoken and care deeply about our community and advancing Democracy to ensure that our families, our communities, and our environment are all taken care of and our concerns are met,” said Clayson.

Sponsored by the U.S. Department of State, each year AMA selects approximately 10 music groups to go on overseas tours, but in the wake of the pandemic these performances are still mostly being shared worldwide through virtual platforms.

“Clayson and I were selected to use our music as diplomacy,” said Jeneda. “We’ll have the opportunity to tour virtually throughout the world and also collaborate with other musicians internationally.”

Sihasin’s first AMA assignment was to render an original patriotic song that reflects the spirit of the Fourth of July from a Native American perspective.

Given one week to write and produce a music video for release this past Independence Day, Clayson and Jeneda sat down together and crafted their new single, “We the People,” that premiered in every American Embassy in the world on July 4, and has gone viral with over 227,000 views.

With its roots steeped in traditional powwow honor songs and Sihasin’s signature punk/rock fusion, the song recognizes the Indigenous origins of Democracy, promotes equality and diversity, and honors the service of Native Americans military members and veterans.

“It’s one song that tells many stories,” said Jeneda. “We wanted to incorporate elements of what patriotism is for us as Indigenous people.

“When it comes to our earth, our land and people, as Diné or as a tribe of Indigenous Nations,” she said, “we’re still connected – we’re still here.”

Living in an era that is so divisive, Clayson said it is important to try to bring healing and acknowledge that the phrase “We the People” belongs to all of us. 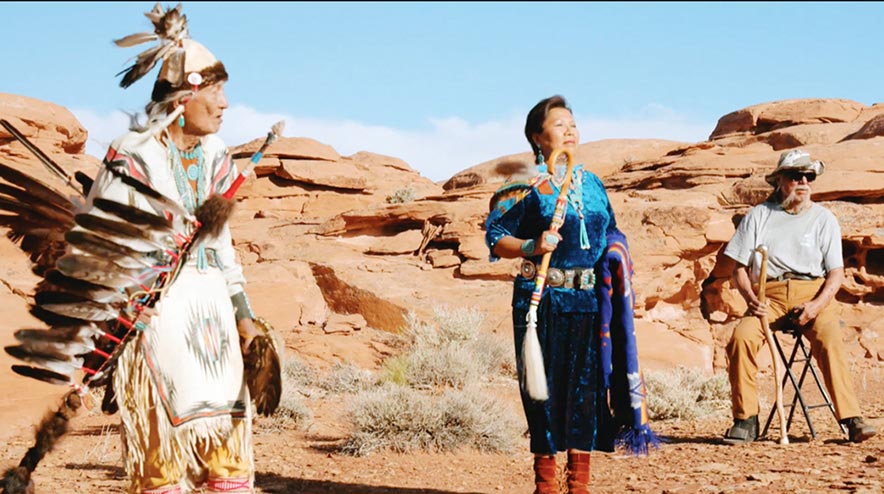 “It’s not just for some,” he said. “When you read the Constitution or look at the Declaration of Independence, all the amendments are there to protect us all as people. That was something that we wanted to acknowledge and represent within the song.”

Instead of being divided in fear and intolerance, we can all be a community and can celebrate, embrace, and love our differences, said Jeneda.

“The diversity makes our planet so beautiful and our cultures so powerfully gorgeous,” she said. “You can be anybody. You can be who you are. You can beautifully represent your history, your culture, and your ancestors.”

Clayson said part of the process of writing the song included visualizing what the final video would look like.

They wanted to reflect the idea of the melting pot of America, Turtle Island, and the beautiful planet that we live upon, he said.

“Part of our goal is to show the world, the grace, the beauty, the strength of our land and our people,” said Clayson. “We are that rainbow of color. Our strength is within our humanity.”

Jeneda said she and Clayson felt that “We the People” could bring light and awareness to the fact that Democracy has Indigenous roots and how much the Navajo Code Talkers and Native American veterans have contributed to it.

“It should never be looked over, never forgotten and should always be honored and revered, the fact that the Indigenous contribution to democracy is strong and powerful,” said Jeneda.

‘We are all related’

Peshlakai said she was honored to participate in the video and the song inspired her and filled her with pride.

“I think it put into words what many of us Indigenous people feel about our country and our sacred homeland,” said Peshlakai.

For her, patriotism represents something very different from how the greater society generally views it, she said.

“For me, patriotism is about the land, the plants – all things in nature where we come from, and to defend the homes and the communities of those we love,” she said. “It means what a person will put their life on the line for.”

Those are the values of Indigenous people, she said.

Peshlakai lamented that in the past four years, patriotism has been misconstrued in its association with nationalism.

“I feel like they hijacked it and we need to take back the understanding of whose country it is,” said Peshlakai.

Jeneda said unfortunately the concept of “us against them” persists in the world.

“It’s something we’re taught societally,” she said. “It’s this division that exists where people see themselves as separate groups with separate ideas when in fact, we are all people, we are all human beings. We are all from Mother Earth and we are all related.”

Jeneda said during the last (Trump) administration she was scared to speak out as an Indigenous woman and now is the time to come out of the “political dark shadow” to build bridges of respect and clean up the debris from the mess that was made.

“We have to acknowledge the past and past traumas and work towards healing together,” she said. “It’s going to take time.”

Jeneda said it is also important to remind people of the representation of Indigenous America at every opportunity, she said, as their song strives to do.

“We have been an invisible Nation within a Nation for so long as Indigenous peoples,” she said. “We have the tools now to more than rewrite history, to tell our history, for people to see and hear.”

The power of “We the People” needs to be reclaimed, she said.

“It’s harnessing that power, bringing voice to who ‘We the People’ are and creating the kind of world that we want to live in,” she said. “We need the world to know how diverse Indigenous peoples are, how resilient we are and how much of our traditional knowledge contributes to this contemporary world.”

Clayson and Jeneda believe a great amount of gratitude is owed to veterans, and intend to commemorate the day with a special virtual program.

“Our Code Talkers fought against racist regimes and fascism,” said Clayson. “They secured freedom and liberty for all people, not just for our people.”

Peshlakai said it’s important for all Americans to remember the service and bravery of the Navajo Code Talkers.

“Their crucial service during WWII will not be forgotten, and we will continue to honor them every August 14th,” she said.