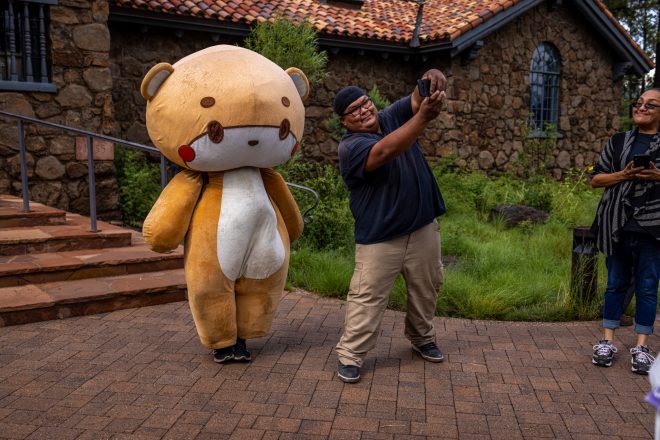 A 33-year-old California man in a giant teddy bear suit of his own creation is walking through southern Diné Bikéyah.

To raise money – on GoFundMe – for multiple causes such as autism, cancer, and the environment, the man in the shash yáázh (daane’į́h) suit, Jessy Larios, is walking his way from Los Angeles to Times Square in New York City.

Larios on Thursday arrived in Kinłání-Dook’o’oosłííd, where he visited the Museum of Northern Arizona the next day, dressed up as the bear he named “Bearsun,” which has a padded head, round red cheeks, and a bobble tail.

“A little wet, but I’m good,” Bearsun said when he arrived at the museum during a rainfall.

Bearsun started his long walk from Los Angeles’ Little Tokyo neighborhood on July 5 and has been braving sweltering temperatures since then. But his journey has morphed into something bigger: drawing fans from all over. He gets buoyed by fans and supporters who stop to pose for photos along the way.

“I didn’t know anything about him until two weeks ago,” said Erik Laughter from Shonto, Arizona. Laughter brought his family to meet Bearsun at the museum on Friday afternoon when Bearsun took a short pause to have a pizza lunch break before meeting more than 200 fans outside the museum.

Laughter said he followed Bearsun on social media when Bearsun crossed into Arizona along U.S. 95 on July 19.

“Until he started entering Arizona, that’s when (Bearsun) really caught my eye,” Laughter added. “When he got to Seligman and Williams, I said, ‘Oh my g––! He’s pretty close!’ I started watching his TikTok (videos) that he made in the past and tried to catch up.

“His cause is pretty cool. He might be a minor celebrity, but I’ve never met anyone willing to cross the entire country before.”

Since then, Bearsun has stopped in several places, including Oatman, Kingman, Peach Springs, Seligman, Ash Fork, Williams, sharing photos of himself in the foreground of the famed Steam Engine #3759 at the Locomotive Park, walking down Route 66, walking on the Grand Canyon Skywalk at Eagle Point, visiting Bearizona, and sharing videos of himself petting donkeys. 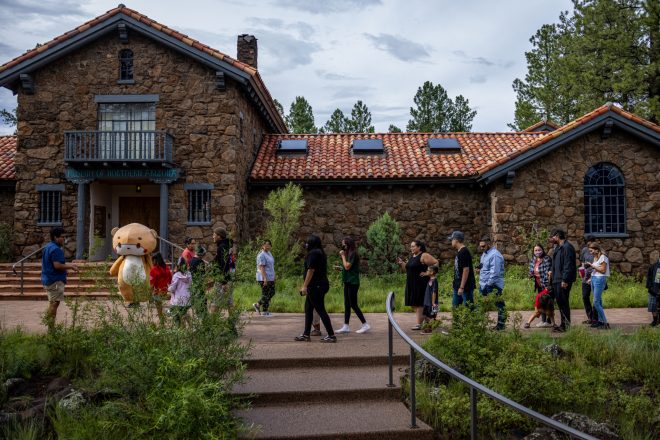 Navajo Times | Sharon Chischilly
Many fans and supporters line up to meet Bearsun Friday afternoon at the Museum of Northern Arizona in Flagstaff. Jessy Larios, a 33-year-old California native wearing the 60-pound Bearsun teddy bear suit, is walking from Los Angeles to Times Square in New York City to raise awareness and funds for five causes, including environment and mental health.

In Flagstaff, Bearsun learned about the Native American tribes of the Colorado Plateau and posed next to the Hopi R2D2, a droid from the museum’s art exhibit “The Force is with Our People,” which reflects Star Wars themes such as endurance and rebellion.

The museum staff also presented him with a Zuni shash fetish, which Larios said he accepted but didn’t know what to say about receiving an “awesome” Native gift of a “bear with a backpack,” which symbolizes strength and healing.

“And I have a backpack!” Bearsun exclaimed.

“(The) Zuni fetish … has a piece of stone on its back and he was very interested in that,” explained Darvin Descheny, interim public programs manager at the MNA, who helped bring Bearsun to the museum.

Descheny, Diné, said Bearsun saw the Zuni shash fetishes in the museum’s Babbitt Gallery and learned that shash often travel from the west just as he is.

“We talked to him about what the bear represents (in Diné culture),” Descheny said. “I talked about the symbolism and the strength a bear represents. I told him that’s our (Diné) belief.

“And he’s going to be traveling through the Navajo Nation, so he’ll have that strength and resilience with him in his journey (to New York City).”

Larios said he’s keeping Bearsun’s social media followers in the loop by posting frequent updates on his whereabouts. And this weekend, he’ll be walking through a few Diné communities along Navajo Route 15 toward Dilkon and on to Window Rock, Gallup, and to Albuquerque.

“Everything’s been unexpected,” said Larios inside his Bearsun suit, in an interview with the Navajo Times. “It’s interesting.”

Bearsun was also welcomed home to the Colorado Plateau by the museum staff when he reached the Dook’o’oosłííd area, adding that he’s learned that Natives like to joke around “a lot, which is awesome!”

To read more about Jessy Larios’ Bearsun journey to New York City, pick up the Aug. 5 edition of the Navajo Times.