Songs from the Rez 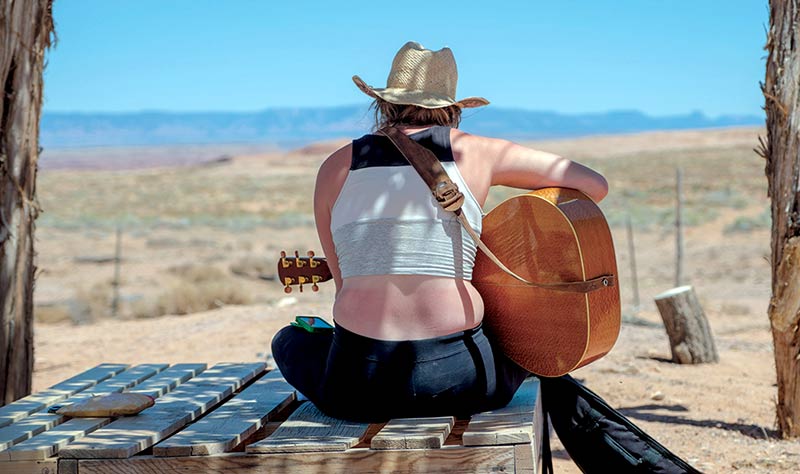 Special to the Times | Ray Landry Christy Cook of Albuquerque gazes over the desert landscape as she focuses on her music during the annual songwriting retreat in Many Farms, Ariz.

Songwriters draw inspiration from the land, each other

Special to the Times | Ray Landry
Christy Cook of Albuquerque gazes over the desert landscape as she focuses on her music during the annual songwriting retreat in Many Farms, Ariz.

That first night on Carson Mesa, the famous Central Agency wind kicked up.

It made short work of the little shade tents, sifted everything with cinnamon-colored dust, and made the Europeans wonder what they had gotten themselves into. And it whistled its way into several songs. Because this was the second annual Songs from the Rez songwriting retreat, and everything — the wind, the mountains, the wild horses, even the other participants, even songwriting itself — was grist for the mill.

Eleven people from teenagers to almost-middle-aged, from as far away as Denmark and as close as Many Farms, gathered here at the Bia ranch last week hoping to make good on the camp’s promise to send them away with five brand new songs. They all did. The retreat’s founder, Kristina Jacobsen, knew they would. Part of the magic comes from the place. It’s rough out here, and all good songs have a little roughness.

“People are washing their dishes, using the outhouse,” said Jacobsen, an anthropology professor and touring singer-songwriter who sees the retreat as a way to combine her interests. “It’s glamping, but with good food.” The other half of the “alchemy,” as participant Christy Cook — also the camp’s yoga instructor — calls it, is the other songwriters.

The retreat’s emphasis is on co-writing, and through the week most of the participants have a chance to partner with each other. All view each other as equals, even though some are veteran entertainers and others have never written a song and only sing in the shower. “When you write with another person, you come up with something you would never have imagined,” Cook said.