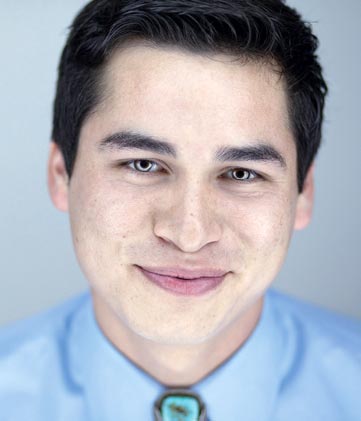 It begins with two brothers on the hunt for a wolf that’s been menacing the ranch and leads to a journey for the affection of their father and an unbreakable brotherly bond.

This is “Bloodlines,” a film written and directed by Christopher Nataanii Cegielski, 23, a Navajo filmmaker from Flagstaff.

Cegielski graduated from the University of Arizona in May and since has begun trying to make a name for himself in the film industry.

After gaining ground on the film festival circuit, Cegielski moved to Los Angeles where he works on short videos and production projects.

“It really helps to explore new ways of filming stuff,” he said of the different jobs.

Although he has his hands full, Cegielski does make time for his own projects.

He is currently working on “Movement Through the Valley,” a film about two Navajo police officers who are trying to uncover a mystery in the shadows and whether supernatural forces are at play or not. One officer is traditional and grew up on the Navajo Nation while the other is urban and doesn’t fully understand the traditional side of Navajo life, making it difficult for them to see eye-to-eye.