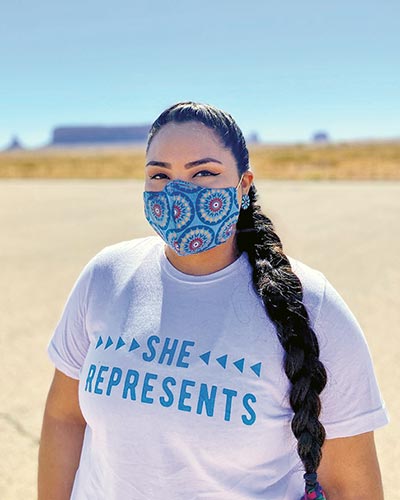 For the past year, young leaders like Shandiin Herrera helped organize critical relief efforts to communities across the Navajo and Hopi nations.

Herrera’s work was highlighted by wireless network operator Verizon in one of their commercials that aired during the Oscars on April 25.

“They told me that I was the first Native American person that they ever worked with,” she said. “It was important for me to highlight our story and how our people showed up for each other and didn’t wait for anyone else to help them.”

As the pandemic began to spread across the Navajo Nation in early March 2020, the tribal government issued emergency public health orders effectively shutting down or limiting tribal services and ordering residents to shelter in place.

“Because our community is located so far from Window Rock and other chapters, resources weren’t reaching our area,” Herrera said, according to a Navajo & Hopi Families Relief Fund news release.

“I saw my community members growing frustrated,” she said. “I wanted to help because I didn’t see my community getting support in any other way.”

She was working as a policy analyst and project consultant at the Oljato Chapter through a fellowship with the Lead For America program when the government shutdown began.

She then became the Relief Fund distribution lead for the Monument Valley area.

“My role was outreach and to lay a foundation for how we would function as an organization,” she said. “I set up the Relief Fund’s email system so that people could contact us there.”
During the pandemic, Herrera found it difficult to organize a staff of volunteers so she enlisted the help of her family.

“In the beginning, we had funding and we had help requests but we needed volunteers,” she said. “There are a lot of elders in my community and it was challenging to find young people to help us.”

“I told my family that I needed their help,” she said. “We’re very close and they trust and support me. It’s great to have this family dynamic in getting food and PPE out to our community.”

Beyond organizing food and PPE distributions, Herrera was also helped implement the Relief Fund’s Clean Hands Project where hand-washing stations are given to Navajo and Hopi families that don’t have access to indoor plumbing or running water.

Herrera said out of 485 homes in her region, 214 households didn’t have running water. Since December 2020, the Relief Fund has been able to provide 130 hand-washing stations to homes in Monument Valley, Utah.

“Shandiin’s leadership has been truly inspiring,” Branch said. “She is very thoughtful in thinking through plans for execution, improving service delivery to ensure needs are fully met, and launching new initiatives.”