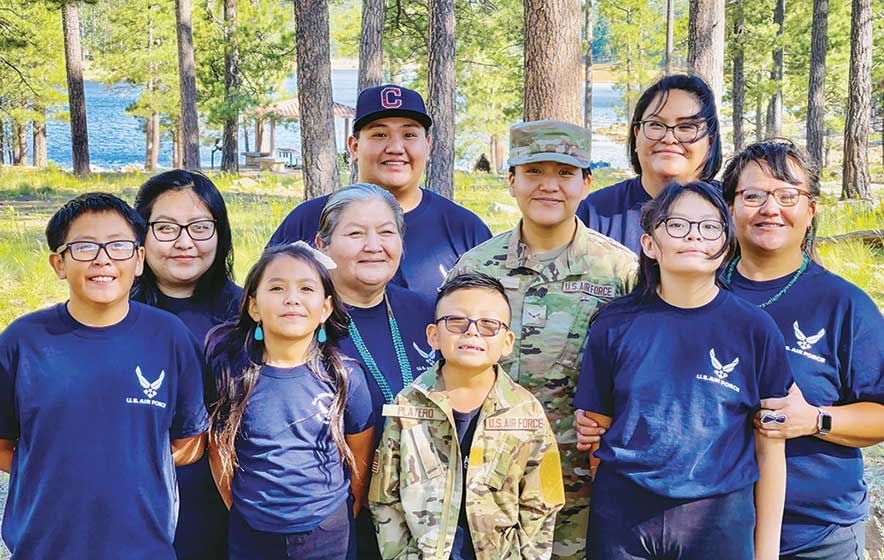 Courtesy photo | Cook family
Standing next to her mom, Air Force Airman Paula Cook is surrounded by her sisters, nieces and nephews.

When Paula Cook was a young girl, she’d watch her dad, the late Paul Cook, get ready for work.

He meticulously laid out his uniform, polished his boots and shined his badge and name tag.

The senior Cook was a Navajo Nation Police officer for 29 years stationed in his hometown of Crownpoint, where he and his wife, Laberta, raised Paula and her three older sisters – Laronda, Larinda and Pauletta.

They are all registered voting members of the Becenti Chapter.

Judith and Kirby are their step sister and brother.

By the time she was in junior high, the young Cook was determined to follow in her father’s footsteps, but on a path of her own.

“It’s always been the Air Force for me!” she exclaimed.

Cook signed up in the spring of 2020 during the height of the coronavirus pandemic.

She completed boot camp this past February at age 25, graduated in June then continued with specialized, technical training. This fall, she’ll receive her long-term assignment.

Like her father used to do, every morning Cook lays out her Air Force attire, polishes her boots and proudly reflects on what her name tag means to her and her family.

She said it was the happiest day in her life when she received it.

“That really made me emotional,” she said from her current location at Luke Air Force base in Glendale, Arizona. “It was so special.”

Her sister Larinda said, “I think my sister is very brave and ambitious. The military will provide her skills and experience that she will use for the rest of her life.

“Words cannot express how proud I am for her,” she said. “She gets to see the world outside the Navajo Nation. It’s limitless.”

In an outpouring of love and support, each of her sisters, nieces and nephews and mom expressed similar sentiments.

Cook said she planned to sign up for the Air Force after high school. But tragedy struck the family when her dad was killed by a drunken driver when she was in her junior year.

Staying close to her mom and sisters, Cook continued her education at Arizona State University, a step she said bolstered her decision to join the military.

“I plotted it out in my mind,” she said. “You’re going to graduate from ASU, you will have a bachelor’s, having a bachelor’s degree gives you a higher rank in the military.”

As planned, she earned a bachelor’s degree in secondary education with an emphasis in history.

Her mom said she’s always been interested in history, especially the history of Navajo Code Talkers, since her great uncle, her grandma’s brother from her mother’s side of the family, Mathew Martin Sr., was a World War II Navajo Code Talker.

But after graduation, there would be another delay in realizing her dream.

Right out of college she got a job as an instructional aide at the Salt River Tribe’s high school located not too far from the ASU campus. She loved teaching the Pima-Maricopa people.

She may have stayed longer than two years, but by spring of 2020, COVID-19 was shutting down classrooms and schools.

She took the downturn in the economy as an opportunity to finally join the Air Force.

Walking through the doors of the military’s entry processing station in Phoenix, she was surprised to meet a member of the Navajo Nation.

But, she said, since meeting the recruiter in Phoenix she hasn’t met another Native American in the military.

(During active conflicts the situation is different. Native Americans are the largest of any ethnic group to enlist, according to historical sources.)

It was at the tail-end of a bad Texas snow storm last February when she flew into Lackland Airforce base in San Antonio for eight weeks of training with 28 other service women.

“It was scary and I felt so alone,” she said, mentioning how difficult it was to be away from her family.

She added that she was the only Native American in the group.

“I wish there were more,” she said.

The first two weeks of boot camp were the hardest.

“My first encounter with military personnel was at the airport,” she said. “They started yelling at us, telling us to get our documents out.

“They are constantly yelling at you,” she said. “It made me wonder if I’d made the right decision.”

Support and encouragement from her family and remembering her dad’s words helped her make it through the rough times.

“He encouraged me and my sisters to constantly make ourselves better,” she said. “I go back and think about that and (work on) being the person he would want me to be.”

Her mother, Laberta, said, “I think (her dad) would be breaking down with tears. He’d be so proud of her.”

“They will always look up to her,” Laronda said. “My sister Paula was determined to conquer her goal. To get ready (for boot camp), she was running endless miles, exercising daily, and studying on a daily basis.”

Each of her nephews and nieces added thoughts about their auntie in written statements:

“She’s very brave. She has shown me that anything is possible if you put your mind to it.” – Keorion.

“My Auntie Paula is awesome. She is a big influence to me. I will always never forget her words of encouragement to always do my best in school.” – Keshawn.

“I knew she had a dream and I knew she was going to conquer it.” – Kelana.

“I didn’t know much about military before, but seeing my auntie inspires me to join when I get older.” – Kylie.

“I am now part of that one percent who decided to serve our country,” she said proudly.

She’s also the first in her family to receive a university degree and first on her father’s side of the family to join the military.

Going above and beyond her duties, she’s also doing what she can to break down barriers.

“I’m sharing my background and culture with many different types of ethnic backgrounds,” she said. “It is truly a gift in itself because I’m ending many stereotypes about Native Americans.”

Her sister Pauletta said, “I am absolutely proud of her accomplishments and can’t wait to see what she’ll surprise us with next!

“I know she has my late dad jumping up and down with excitement!” she said. “She is truly an inspiration to any and everyone.”

“I am so proud of her,” said her mom holding back tears of her own.