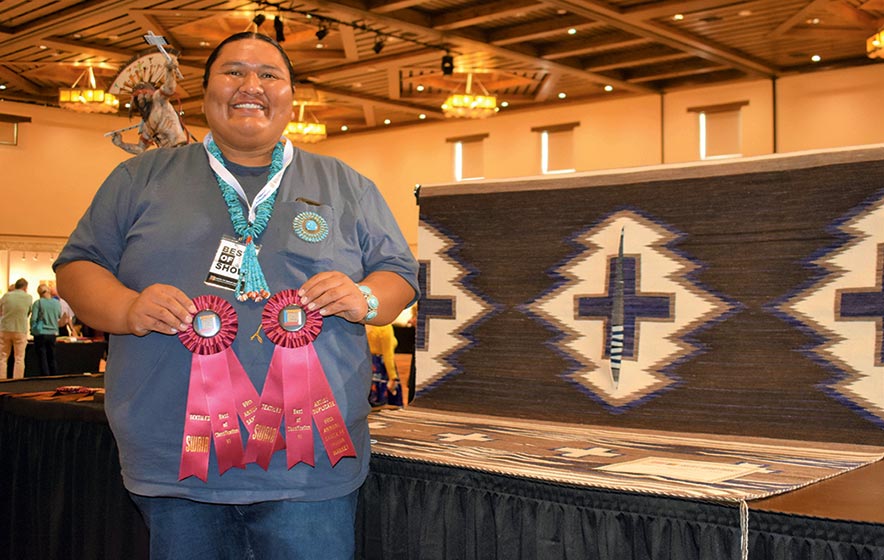 Best of class in textiles winner Tyler Glasses, 33, from Rock Point, Arizona, said his paternal grandmother Nellie Glasses, who passed away in 2019, lives on through his weaving and that of his sister Naiomi.

“She was the one who really got us into weaving,” said Glasses. “You can see the influences she had on our weaving. I feel like she’s here with us, because without her teaching we wouldn’t have been able to learn this and progress as weavers.”

This was Glasses’ first time participating in the in-person market and he said his win took him by surprise.

He said his award-winning Navajo churro wool “Poncho for Days” was inspired by the desire to do something different, but in a traditional style as was taught by his grandmother.

“I see ponchos every now and then, but not very often,” he said. “I like doing older style rugs that are pre-trading post inspired.”

“I like saddle blankets, purses, things that you can use,” he said.

While he usually starts his rug weaving with an idea of what he wants to do, Glasses said he doesn’t draw it out, stays open, and allows his weaving to evolve intuitively.

“Usually I have a story idea in my head, but I don’t have a set process,” said Glasses. “I just go with what I feel will look good and pray for the best outcome.”

The earth tone colors and designs in “Poncho for Days” represent a desert landscape with rain and clouds before and after a monsoon, with deep blue in the wedge-weave pattern evoking running streams after the rain.

Glasses said focusing on weaving really helped him get through the stress and worries of the COVID-19 pandemic and the loss of his grandmother and how overwhelming it all felt.

“When you’re weaving, it’s therapeutic in the sense that you have to be present in that moment,” said Glasses. “It re-centers you, calms you, makes you slow down and it makes you feel like you’re at peace.”

He remembered a teaching grandmother shared.

“She told us to work ourselves into a good mood to weave,” said Glasses. “She said when you put good thoughts into your weaving, whether you sell it or give it to someone, they will receive those good thoughts.”

Hopi carver Arthur Holmes, from Lower Moenkopi Village, described his best of class in Pueblo wooden carving katsina doll as a testament to the struggles of the COVID-19 pandemic.

“My piece ‘Broken Arrow’ represents the time that we all went through since the beginning of the sickness and working together to help each other,” said Holmes.

That is exactly what the two interdependent katsina figures in his carving, the paralyzed Tuhavi carried by blind Koyemsi (Mudhead) holding an arrow broken at the tip, depict.

“The two, put together as one, they can make their journey, regardless of the hardships,” said Holmes.

As represented by the katsinas, he said some people are so blind to think that we could conquer this “evil spirit” – COVID-19 – while others can see it, but can’t really do much about it.

“Us Native people have tried so hard to protect our elders,” said Holmes. “Unfortunately, some people don’t listen. It’s right in front of us, but there are some people who are so stubborn. We all lost a lot of loved ones, especially the elders, the vulnerable ones.”

However, together, people can continue to help one another, try to search for a cure, and pray, he said.

“Pray and protect ourselves and hope for the best, because once we lose our elders, all of our history, medicine, and our traditional values are gone,” said Holmes. “We pray to our elders who’ve gone before us…”

At the top of his katsina doll, the eagle swooping down over Tuhavi and Koyemsi represents the messenger from above who holds the answers to the dilemma we are all facing, said Holmes.

“The eagle represents the other side coming down with an arrowhead,” said Holmes.

The arrowhead, held in the eagle’s claw, represents all of us together fighting the disease, he said, with the goal of uniting Koyemsi’s broken arrow with its tip to make it whole again in the hope that we can all stay healthy and continue the journey into old age.

“An arrowhead signifies strong medicine as well,” he said.

Holmes believes we are living in the time of Koyaanisqatsi, or life out of balance, with extreme weather events such as drought and wildfires, violence and unrest, and the airborne virus that postponed most traditional ceremonies, all signs that have long been prophesied.

“We lost our ceremonies for so long and we are so eager to get back into the way of life,” he said. “We all have to keep going, no matter how tough it gets. I just pray that the Indian Nations all work together, be strong and reunite as one.”

In his award-winning carving “Healing into the Night,” Diné best-of-class in sculpture winner Raymond Chee, from LeChee, Arizona, brings to life the movement of the Apache Crown Dancers and the Mountain Spirits – Gaan – that guide them.

“The Apache people really love and fully respect the Gaan,” said Chee, whose grandfather was half Chiricahua Apache.

The Crown Dancers have a purpose of healing and people can benefit just by looking at them and listening to their songs, he said.

“Everybody needs healing,” said Chee, especially in these times.

If you have trouble on your mind or are feeling down, just watching the dancers can make you feel better, he said.

“That’s part of the healing right there,” said Chee. “It really motivates you, gives you strength and makes you feel proud.”

He said the dances are for all people throughout the world.

“They make you feel at ease and make you part of the family,” he said. “You become one of them. It really makes you feel like you’re part of it.”

Chee’s ideas for his carvings sometimes come from dreams or emerge from the aged and weathered driftwood logs he collects that speak to him.

He often starts seeing images revealed in the wood and slowly starts carving them out, he said.

With the Crown Dancer piece, Chee said he saw dancing figures in the wood.

The rest of the detail comes from his experience and memories, he said.

“It’s just something that I see in my mind,” he said. “I don’t use pictures, I don’t use drawings. I just visualize.”

Chee says his work is also infused with his own prayer and feelings.

“It comes from my thoughts, emotions, mind and spirit,” he said. “It goes right into the art.”

He enjoys telling stories through his work, including from other Native American cultures.

“Our young kids are kind of growing out of their traditional ways of understanding our history,” said Chee.

That’s partially because they’ve never been taught, he said.

“When you create something and you show it to them, they really love it, especially if you throw a story in there of how things were back then,” said Chee. “That’s part of my teaching and how you can keep these things preserved through art.”