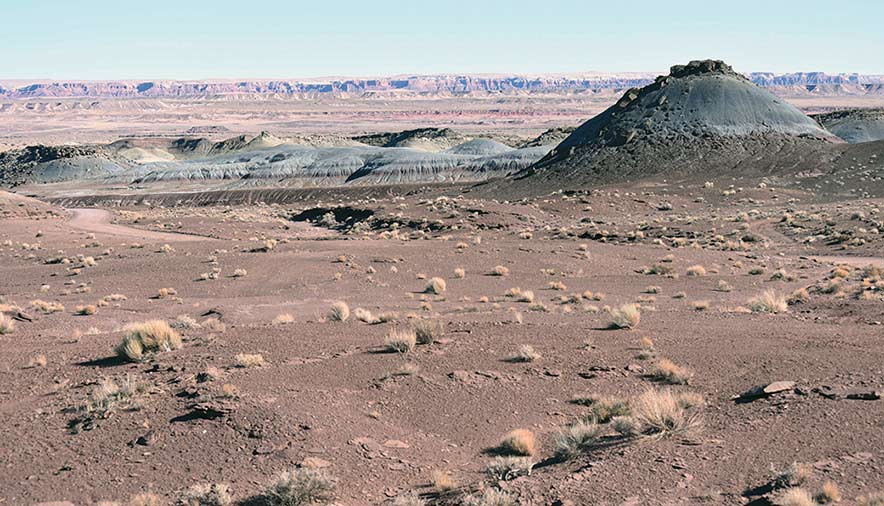 Special to the Times | Krista Allen
The Blue Hills in Dził Diłhił, Ariz., near Cameron in Western Navajo. The area is where Aaron Yazzie spent his time as a child and played on the hills. Yazzie said this area, his family’s original homeland, reminds him of Mars’s Jezero Crater.

When the first images of the landing site on Mars’s Jezero Crater was sent back to earth by the Hazard Cameras of NASA’s Perseverance Mars rover, Aaron Yazzie couldn’t help but think the Red Planet’s inhospitable landscape looks just like the Navajo Nation.

“Especially Tuba City where my whole family is from,” said Yazzie, a 34-year-old mechanical engineer at NASA’s Jet Propulsion Laboratory in Pasadena, California. “It’s not a coincidence. It makes sense that they look the same because Mars and Earth are terrestrial planets. They’re both rocky planets.”

Mars and Earth are like cousins, said Yazzie who was the lead engineer for the rover’s drill bits. 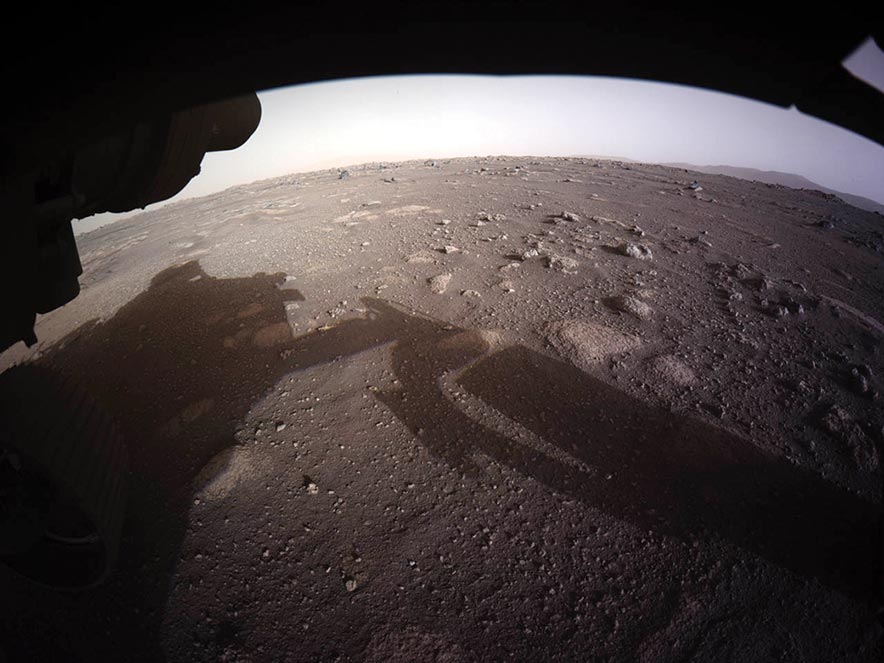 Courtesy photo | NASA/Jet Propulsion Laboratory-Caltech
This is the first high-resolution, color image to be sent back by the Hazard Cameras on the underside of NASA’s Perseverance Mars rover after the landing on Feb. 18.

The rover launched on a two-stage Atlas V-541 launch vehicle from Cape Canaveral Air Force Station in Florida on July 30, 2020. It traveled 293 million miles before it landed in Jezero on Feb. 18.

The rover blazed through Mars’s atmosphere at 12,100 mph and gently landed on the Martian surface 7 minutes later.

Inside the Jet Propulsion Laboratory, which manages the mission, the moment was both exciting and nail biting, said Rob Manning, the chief engineer at JPL.

Just moments before the landing, Swati Mohan, the guidance and controls operations lead for the Perseverance Mission, announced that the Skycrane – a hovering rocket-powered spacecraft – lowered the rover onto the Martian surface of Mars.

“Touchdown confirmed. Perseverance is safely on the surface of Mars ready to begin seeking the signs of past life,” Mohan said.

Members of the mission team clapped, cheered, and fist bumped one another.

“Today was incredible,” Yazzie said in an interview with the Navajo Times hours after the landing.

Because of the coronavirus, Yazzie watched the landing from his Los Angeles home where he was on three different virtual conferences simultaneously, including one with friends and family.

Perseverance is the most sophisticated rover NASA has ever sent to the Red Planet, with a name that embodies NASA’s passion – and the nation’s capability – to take on and overcome challenges.

The Perseverance weighs about 2,260 pounds on Earth – including the robotic arm with a 99-pound turret at the end – and about 866 pounds on Mars. It’s about 10 feet long (not including the arm, which is about 7 feet long), 9 feet wide, and 7 feet tall.

Yazzie said the drill bits for the sample caching system is what he and his team worked on. The system includes a one-bit carousel with nine drill bits for sample acquisition and surface abrasion, one 1.6-foot-long internal sample handling arm, and 43 sample collection tubes, including five “witness” tubes.

The rover will collect carefully selected and documented rock and sediment samples for future return to Earth, search for signs of ancient microbial life, characterize the planet’s geology and climate, and pave the way for human exploration beyond the moon.

“The drill bits for this rover are parts that are going to touch Mars, which we are going to study closely, and we needed to make sure that they were extremely clean,” Yazzie said.

The rover could also deliver the samples to a lander that is part of the planned Mars sample return campaign by NASA and the European Space Agency.

“So the rover itself won’t come back to Earth,” Yazzie said. “It will live its life on Mars all the way to the point that it can no longer work anymore.”

The NASA engineers designed the rover to last more than one Martian year, which is equivalent to 687 Earth days or nearly two Earth years.

“But it’s very likely that it’s going to continue working after that,” he said, “so we’ll just keep using it until it stops working.”

Yazzie said the Perseverance Mission is the first of three. ESA and Russia’s space agency (Roscosmos) expect to launch the ExoMars 2022 mission in late September 2022 to deliver a European rover (Rosalind Franklin) and a Russian surface platform (Kazachok) to Mars in June 2023.

“And we’re going to send a third mission to leave Earth and go to Mars and catch those samples that are orbiting around Mars and bring them back to Earth,” he said.

Yazzie said Mars is often called the “Red Planet” because it appears in the sky as an orange-red star, so the Diné translation for Mars is probably “red star.”

As a desert planet, Mars has about the same amount of surface area as the dry land on Earth.

Yazzie said both Earth and Mars developed over billions of years and they have the same origin story.

“They have a core and a mantel and a crust,” he said. “The way that their landscape developed over billions of years is the same way that Earth was shaped through earthquakes, or ‘Marsquakes,’ and volcanic activity and water waves. Like water flowing through an area will carve out different canyons and arroyos and foothills.

Yazzie said the Martian surface specifically looks like DziŁ DiŁhiŁ – the Shadow Mountain area – where he grew up and spent time running up and down the Blue Hills with his cousins.

“And that’s where my grandparents’ house is and it’s where my mom was born,” Yazzie said. “That’s where she grew up, in the home of my extended family.

“I remember playing with my cousins up and down those hills and going to family reunions out there,” he said. “And that’s the place that reminds me of Mars.”

Some Western Navajos say a place that reminds them of Mars is near the Dinosaur Tracks near Moenave, Arizona, on U.S. Route 160. The area usually sees a high number of red dust storms every year, turning the sky bright orange and covering everything in sight.

“When I’m talking about Mars and describe the Mars landscape or when the Perseverance rover sends down a new image or a panorama, I always think that it looks like the Navajo Nation,” Yazzie said.

There are 21 Native Americans from across the country working for NASA.

But how did this Diné kid who ran up and down the Blue Hills near Shadow Mountain end up designing mechanisms to grab geological samples from other planets?

Yazzie grew up in Holbrook and attended school there. He’s a 2004 Roadrunner alumnus who found himself at Stanford University where he graduated with a bachelor’s.
“That was a pretty big step for me,” Yazzie said. “That wasn’t something that I’ve seen a lot of people in my community, or my family do. So that was a new experience for me. Over time it led to more and more opportunities.” 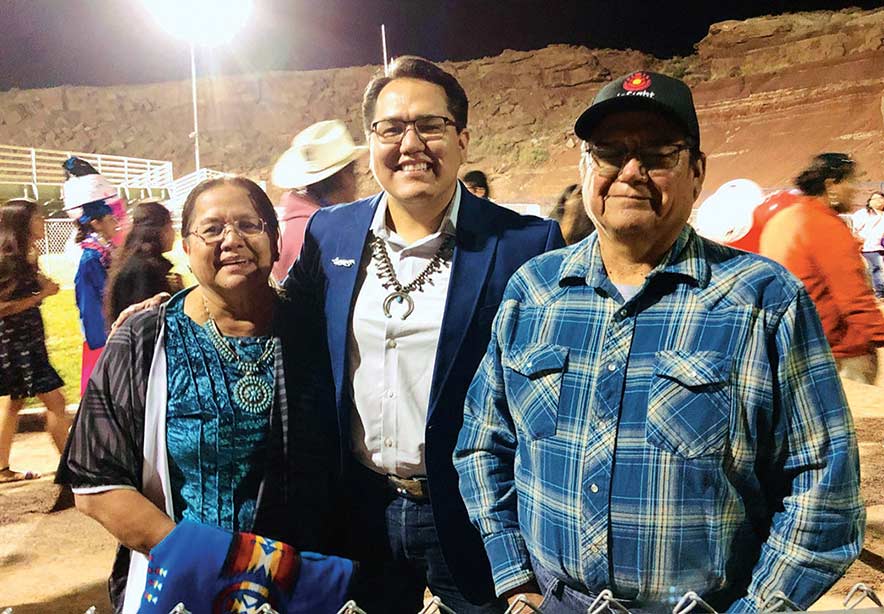 Courtesy photo | Aaron Yazzie
Aaron Yazzie with his parents, Shirley and Kee Yazzie, at the 2019 Holbrook High graduation where he was the commencement speaker. Shirley is a mathematician and Kee is an engineer.

Yazzie said he did numerous internships throughout his college career. Two of those internships were at NASA centers – Goddard Space Flight Center in Greenbelt, Maryland, and Glenn Research Center in Cleveland, Ohio.

The two NASA internships were obtained through the American Indian Science and Engineering Society, said Yazzie, who’s been involved with AISES since his freshman year of high school.

“My senior year of college, when I was ready to look for a job, it was at a national conference for AISES where I was attending a career fair that I met the recruiters from NASA JPL,” he said.

“I gave them my resume and they offered me an interview and they flew me down to Pasadena and I interviewed with people for an entire day,” he said. “After that, they wanted to hire me.”

Yazzie arrived at the JPL when construction of the rover was underway. The rover was designed and built over the better course of a decade. The $2.7 billion-dollar project began in 2013 and its mission ends in 2023.

“The rover is showing that it’s still alive,” Yazzie said of the rover’s activity on the Red Planet.