With no sectional tournament taking place this year, the Arizona Interscholastic Association has invited all of its female wrestlers to the upcoming state tournament.

The two-day state tournament is scheduled to start on Friday at Mesquite High School in Gilbert, Arizona. Weigh-ins will begin at 1 p.m. with the competition slated to start at 2 p.m.

On Saturday, weigh-in will start at 8 a.m., followed by the start of Day 2 of the competition at 9 a.m. 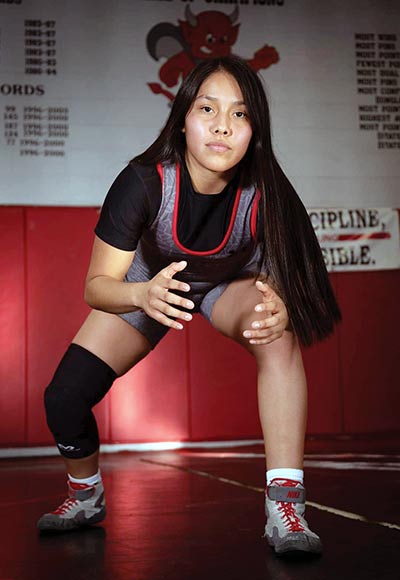 “I have a lot of confidence in them,” Page interim coach Dakota Richardson said on Tuesday. “They haven’t seen a lot of mat time but they are both working hard.”

Due to a late start in the season both athletes have wrestled only one match this season. Those bouts, however, were only exhibition matches so they’re entering the state tournament with a 0-0 record.

Nevertheless, Crank earned the No. 2 seed in the 138-pound bracket while Slim was given the No. 8 seed at 145 pounds.

“They had a seeding meeting among athletic directors on Sunday and out of that meeting they were given those seeds,” Richardson said.

Due to the shortened season caused by the pandemic, Richardson said a majority of the other wrestlers have experienced the same dilemma as his Page athletes.

Richardson said his two wrestlers were seeded according to what they’ve done the past two seasons at state.

“I wasn’t expecting this,” Crank said of her No. 2 seed. “I was expecting at least a No. 5 seed but they seeded me higher based on how I did last year.”

Admittedly, Crank said she feeling some pressure being seeded that high.

“It feels good to be seeded No. 2 but at the same time it’s nerve wracking,” she said.

The Page High senior said she would like to have had a few matches under her belt but the pandemic wiped out all of the regular season tournaments.

“Not being able to have any tournaments this year I feel like we didn’t get that much mat time,” she said. “With those tournaments we got more experienced.”

Slim agreed, as she stated that she’s only had a few weeks to prepare for the tournament.

“I’ve been training for only a month so I’m just wondering if my body is prepared,” she said, while noting she joined the team early last month. 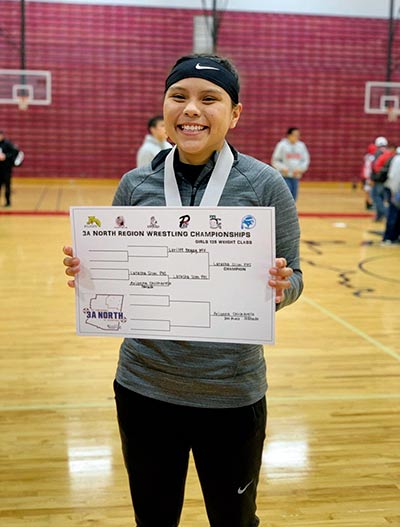 Submitted
Page junior Latasha Slim is seeded No. 8 in the 145-pound weight class for the Arizona girls state wrestling tournament. In 2019, Slim finished third at 135 her freshman season.

With very little mat time, Slim said she’s going to draw on her state experience from the two previous years as she placed third at 135 her freshman season.

“It’s been almost eight months since I’ve been back on the mat but I feel like I’ve perfected some of my moves since the start of February,” she said. “I feel like I’ve conditioned enough to compete at state so I’m somewhat prepared.”

Nevertheless, Crank is feeling some early jitters about the girls she’s going to face.

Despite not having an ample mat time, Richardson said his two state qualifiers are seasoned wrestlers.

“Overall, they’re great wrestlers,” he said. “You know, Charmayne started out about three weeks ago and she’s still looking good. She’s been working really hard with her conditioning and she has high confidence in herself.”

As for Slim, Richardson said she’s might surprise some people in the 145-pound weight class.

“She’s in a new weight class but I feel like she’s going to pull through at the state tournament,” he said.

“I expect to have at least one state champion,” Winslow coach Scott Larsen told the Navajo Times in last week’s issue. “I can’t tell you which one will win state but several of them are doing well this year.”