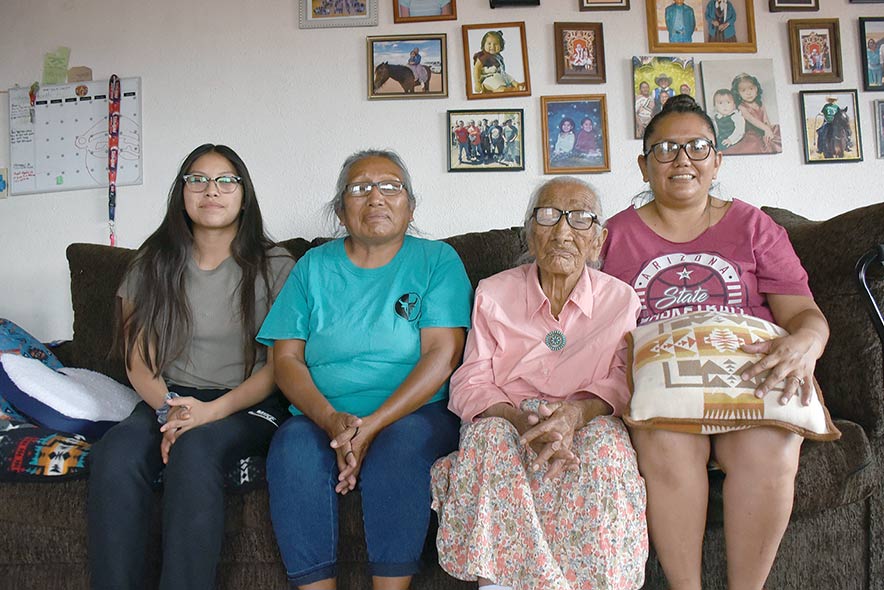 Thora C. Yazzie lived through many infectious disease outbreaks and the Great Depression.

Yazzie, who recently turned 101, said she remembers disease outbreaks such as diphtheria, the H2N2 virus, the second measles outbreak, H1N1, and polio.

“Now, there’s a new disease caused by the SARS-CoV-2 virus,” Yazzie said at her home in Dennehotso on Sunday afternoon.

“All these diseases that come to North America in the 1600s, there are medicinal plants that cure them,” she said.

Yazzie speaks only Diné Bizaad. Even though her eyes are affected by aging, she can see visitors who show up at her house.

She is the daughter of the late Bessie and Hastiin Clah, who was originally from Dziłyíjiin, where Yazzie and her family lived for many years before moving home to Dennehotso.

Born by the cornfield 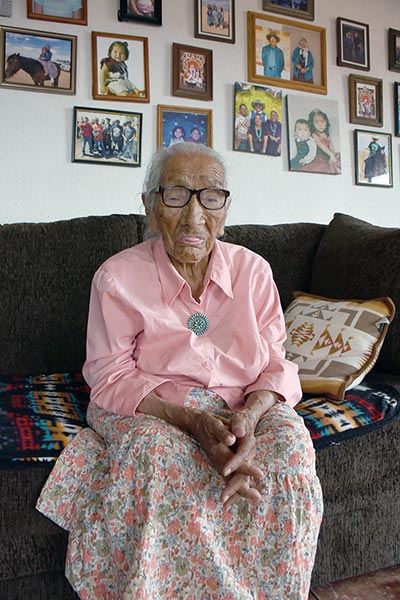 Navajo Times | Krista Allen
Surrounded by her family portraits, Thora C. Yazzie, 101, sits on her sofa Sunday afternoon in Dennehotso, Ariz., where she was born and raised.

Yazzie said she was born in the summer of 1921 near her parents’ cornfield, in a chaha’oh, just north of her home.

She grew up herding sheep and playing with her siblings in the summertime.

“I followed the sheep,” she said. “My family and I spent our summers at the cornfield.”

And climate change means rising temperatures and less rain for the region, limiting corn and other vegetables in cornfields/gardens.

“We planted corn, watermelon and squash,” Yazzie said. “The men used to plant, and we had an abundance of vegetables and melons because we didn’t have a convenience store. We had trading posts.”

Yazzie said men in her family often went to the trading posts in Mexican Water, Mexican Hat or Round Rock to get food and supplies after selling a rug to the trader.

Sometimes, she’d go along with the men, camping along the way.

“We used to travel there by horseback,” she recalled, “and we had to spend the night to get important items. I remember flour was sold in a paper sack. I don’t know the cost – I was a child.

“We traded rugs and sheepskin, and we used to haul those things by horseback, and we’d bring them home,” she said. “Other people would rumor, ‘They went there and bought this.’”

Yazzie said human genes harbor many secrets to a long and health life. But it’s food that keeps her strong and her memory intact.

The centenarian said she achieved her remarkable longevity through prayers, herbs, and Native foods, such as blue corn mush, Navajo corn, beans and even mutton.

She said her favorite is tóshchíín, aside from blue corn cake.

Her daughter, Bernice Begay, said her mother likes other foods such as oatmeal, grits and blue corn.

While her late husband, Stanley Yazzie, worked and provided for the family, Thora said she was a homemaker who used to weave, make moccasins, baskets, clothing, and other things.

“And I used to herd sheep,” she said. “My vision diminished a while back. Three years ago, I could see, and now I wear glasses.”

Stanley died of cancer caused by exposure to radioactivity in uranium mines. Thora was also diagnosed with cancer, said Bernice. But through prayers and ceremonies, the cancer has gotten smaller, said Thora.