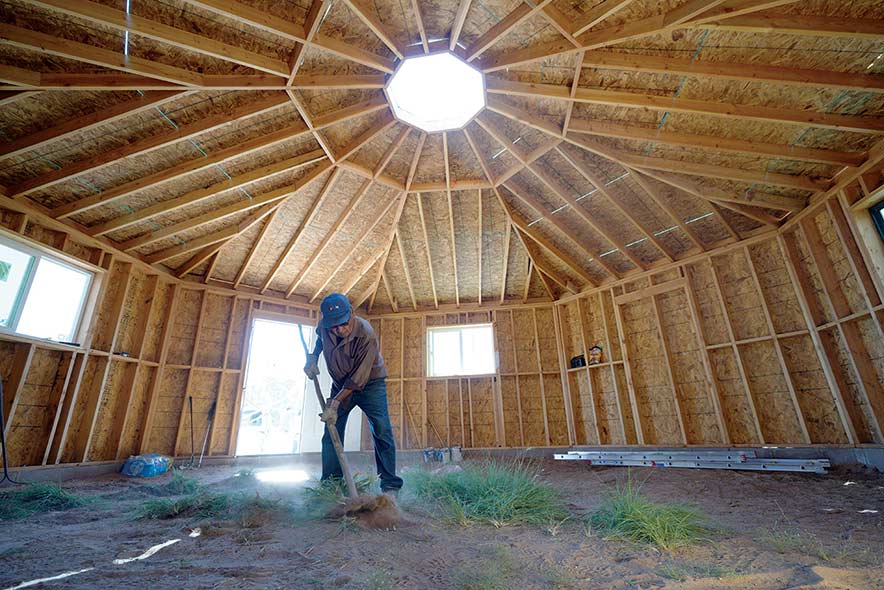 It’s not yet complete, but the framework is set, ready to be wired before insulation is placed and covered by paneling.

Before February 2021, Ashley, 66, said he had to sleep with up to 10 layers of blankets, six shirts and four pairs of jeans – and a jacket – during winter.

The twice-enlisted Marine Corps veteran made his home – looking more like a cedar wood shack, which kept most of the wind out – as comfortable as he could.

At the time, he intended to construct a small structure next to his tiny travel trailer for a wood stove since it would not fit in the trailer. He applied for a Hardship Assistance check, which he said he would use to buy supplies.

Seventeen months later, Ashley is helping an army of volunteers, including candidate for president Buu Nygren, armed with hammers, electric saws, nails, shovels and wheelbarrows, working to build his hogan.

He lives in a remote area within the Wide Ruins Chapter boundary called Gad Łeeyayani, a rugged area surrounded by cedar trees and rolling hills.

For years, he didn’t have a home-site lease because he didn’t understand the complexity of the process.

He also didn’t have the money, or the transportation needed, to badger tribal officials who approve the steps that required their signatures. 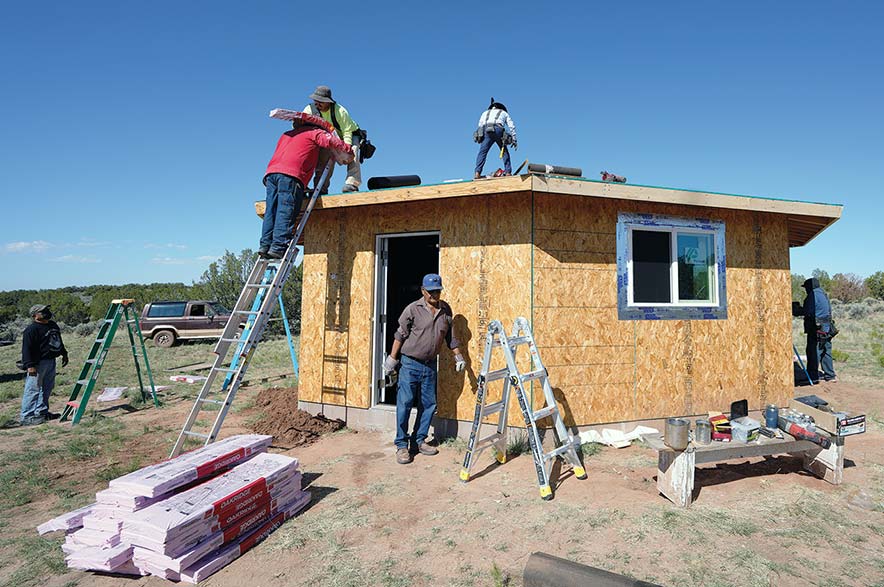 If he had a home-site lease, perhaps the Navajo Veterans Administration could have put his name on the long list of veterans who’ve been requesting a home since the 1980s.

Because he didn’t, the resourceful Marine built himself a makeshift home out of cedar branches.

He covered the structure with layers of plastic, then anchored it with rocks and other heavy items to keep it from blowing away.

He provided for himself by doing odd jobs like shearing sheep for families, which is how he acquired the tiny travel trailer he turned into a bedroom.

He also gathered herbs and sold them or took them to ceremonies where he helped.

When the COVID-19 pandemic hit, Ashley suddenly found himself jobless. That’s when he started asking friends to help him get water.

Because he’s not on social media or own a smart device, he had no idea boxed foods were distributed at chapter houses.

He said he began hunting rabbits and squirrels around his homestead and ate wild, edible plants.

During the winter, the bitterly cold nights awakened him at 3 a.m. He needed to warm himself, so he had to go outside and build a fire.

The summer is more bearable, said the aging Marine, but he hopes his new home will be completed before the cold winds return.

The distance to his homestead and, depending on the good nature of volunteers, kept construction at a slow pace. He had hoped the hogan would be finished by now. While the structure is built, much work is still needed.

“There’s still lots left to do on the inside,” Ashley said. “We still need to do insulation. I want to get it wired before the drywall goes up. I need to find an electrician.” 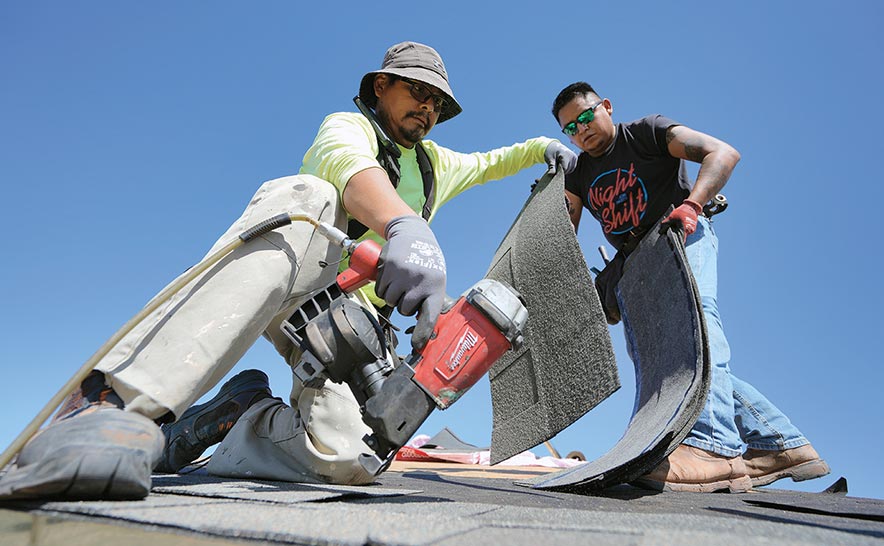 Navajo Times | Donovan Quintero
Volunteers use a framing nailer to install roofing shingles on a new octagon on the morning of July 17. Volunteers are building a new home for U.S. Marine Corps veteran Harry Joe Ashley in Gad Łeeyayani, Ariz.

Overall, there are 8,286 registered Navajo veterans, according to the Navajo VA, with Leupp having the largest population – 365.

According to Navajo VA Executive Director James Zwierlein, the number of veterans requesting a home date back to the 1980s and totals more than 1,400.

To date, the first home built by Navajo VA went to Andrew Kelly, 73, a Vietnam veteran from Tuba City.

Kelly’s home is a two-bedroom, 1,300-square-foot, hogan-style home, according to the president’s office.

The Navajo VA is overseeing home repair and improvements to more than 100 veterans’ homes across the reservation.

Zwierlein said Navajo veterans requesting a home would be at the top of the list.

They would need a home-site lease, a DD-214, and their Certificate of Indian Blood to start the process, he said.

Now that Ashley has his documents, he is qualified to request a home from the Navajo VA.

He is further qualified since he is a homeless veteran because he does not live in a permanent structure, said Zwierlein.

According to the U.S. Department of Housing and Urban Development, 37,252 veterans experienced homelessness in January 2020.

Zwierlein said the VA defines homelessness as a veteran who does not have a permanent place to live or lives with family or friends.

Since ARPA funding has been authorized for veteran housing, construction of two new homes and four renovations have begun, added Zwierlein.

“The goal is to build 50 homes in three years,” Zwierlein said on Monday. “We have three years to build these homes.”

He said for that to happen, one veteran home a week would need to be built, using Navajo labor and Navajo contractors.

Ashley hopes he will eventually move into his new hogan and is dependent on how often volunteers can go to his homestead and if he has enough material with which to finish.

Only worry is food

He’s been gathering wood from around his homestead. Thanks to residents, he’s been getting water. His only worry is where to get food.

“I lost my food-stamp card in May,” Ashley said. “I’ve been making calls, and they just give me the runaround. I was told to go to my local office. I have been wanting to go over there to get a new one.”

He’s back to shearing sheep, too, which has helped.

“I’ve been depending on donated foods that people bring for me. That’s it. I’ve also been shearing sheep again and eating there,” he said. “I’ve sheared at 15 places.”

He hopes his hogan will be completed before winter.

“I don’t want to spend another winter sleeping with lots of blankets,” he chuckled.