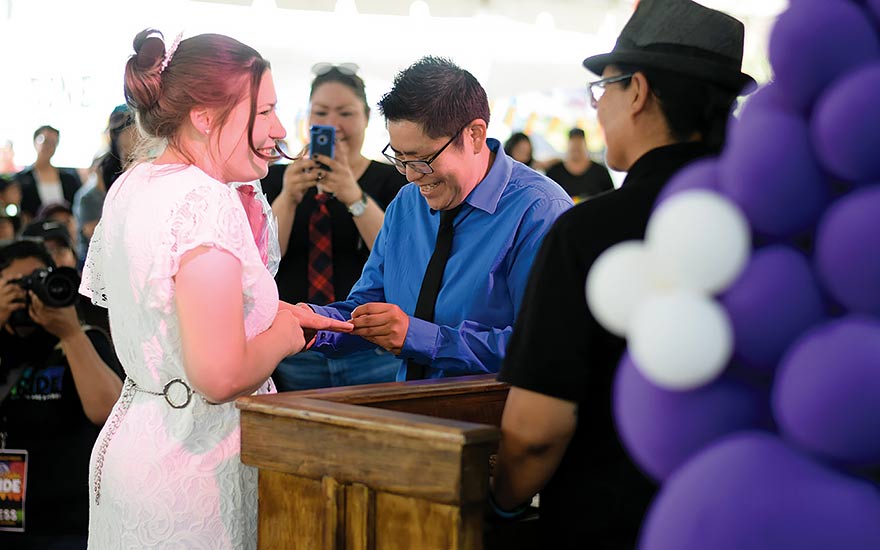 Navajo Times | Ravonelle Yazzie
Ophelia and Bonnie Shondee tie the knot on Saturday afternoon in the midst of the Diné Pride festival in Window Rock.

Ophelia Shondee met her new wife, Bonnie Shondee, some 14 years earlier. Ophelia had noticed Bonnie one evening when she was hanging out with her friends.

“I told my friend, ‘You see that girl, I’m going to marry her,’” Shondee remembered fondly.

It took a little finessing and time but Opelia Shondee eventually meet Bonnie. One of Shondee’s friends talked to Bonnie and told her how much Shondee liked her.

“Back then, I thought I knew everybody,” Bonnie said. “So I was, like, ‘Who is this person that already says they like me?’ So I wanted to meet her.”

They’ve been together ever since.

“I kinda knew back from the beginning,” Bonnie said, teasing Ophelia. “I always knew for me it was her that sometimes didn’t really know.”

The pair got married during the 2019 Dine Pride celebration last Saturday at the Veteran’s Memorial Park.

“I proposed a long time ago,” Ophelia Shondee said. “We’re finally getting it done.”

The couple was married in the heart of the Navajo Nation government just a few feet away from the institution that voted in 2005 to make their marriage illegitimate and prohibited under Navajo Nation law.

In the late 90s, marriage equality became a hot topic and many states across the country were banning same-sex couples from marriage and changing their laws to state that marriage is between a man and a woman.