Jenelle Begay Reclosado is from Nazlini, Arizona, and her husband Dustin is from Del Muerto, Arizona. But they met in Alaska. 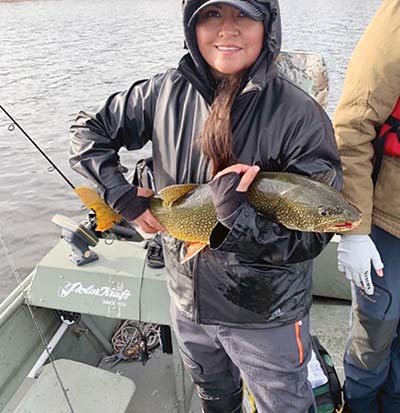 Courtesy photo | Spin Your Reels Alaska
Jenelle Reclosado poses with a lunker of a lakey. “We throw them back,” she said.

“Dustin was already here,” explained Jenelle in a telephone interview from their Anchorage home. “He moved here with his mom when he was young and decided to stay. I came here for my job.”

Introduced by mutual friends, the two didn’t know each other were Diné.

The two eventually became life partners, and now they are business partners as well. Spin Your Reels Alaska, their fishing guide service, is completing its first year in business next month.

It started as a hobby. Dustin, who is Diné, Basque and Filipino, started fishing at the age of 5 at Wheatfields Lake. After moving to Alaska, which is pretty much fisherman’s heaven, he was out every chance he could get.

Jenelle discovered she too liked the chance to get out into the wild and outsmart elusive prey. They got pretty good at it.

“Every time someone came to visit, we’d take them out fishing,” said Jenelle, who is Tl’aasch’ii’i born for Kin Yaa’áanii (Dustin was out fishing with a client at the time of this interview and couldn’t contribute). “People would say, ‘Hey, you guys are really good at this!’ So we thought, ‘Why not make it into a business?’”

But starting a guide service is not cheap. You need gear, boats and vehicles. Jenelle, whose day job is with a medical supply company, came up with an ingenious way to capitalize their venture.

“I know a lot of doctors through my work,” she said. “Some of them agreed to sponsor us in exchange for advertising their practices on our social media pages.”

One would think that if you’re starting a guide service in Alaska, November would not be the month to do it. Au contraire.

“Ice fishing is getting very popular, and the ice fishing here is great,” said Jenelle. “You just drive a vehicle out onto a lake and drill a hole.” 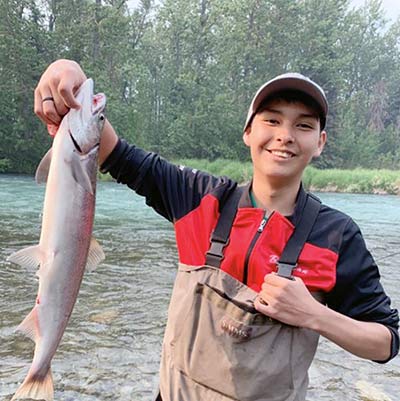 They weren’t expecting much business their first year, but they ended up with 50 customers, mostly by word-of-mouth.

“Doctors talk, nurses talk and before you know it, your schedule is filling up,” said Jenelle. “As we were going into the summer, we decided to keep the business running.”

Their clients have come from China, the Netherlands, the United Kingdom, New York, California, Canada and Saudi Arabia — but they were really flattered when some Alaska Natives showed up.

One thing the Reclosados haven’t seen is another Navajo.

“I hope someone reads this article and calls us up,” said Jenelle.

The couple is homesick enough for the rez that the first person to show up at their door and greet them in Navajo can count on a deep discount and the royal treatment, she added.

You would think they would run into a lot of Natives in Alaska, which has one of the highest Native American populations in the U.S., but living in Anchorage, that’s not the case.

“Most of the Native Alaskans pretty much stay in their villages,” said Jenelle. “They’re so remote, it’s not easy to come to town. Some of them you can only reach by air.”

They’ve met a few, and Jenelle thinks the connection between Alaskan Athabascans and the Diné is a bit overblown.

“They have a few words that are similar to ours,” she said. “Like for ‘rabbit,’ they say ‘geh’ and we say ‘gah.’ They look similar to Navajos. But their ceremonies are very different. They’re more in the totem pole tradition.”

The services Spin Your Reels offers are customized to the client. You can go after burbot (a freshwater lingcod), pike, Arctic char, grayling, trout or lakers, and if you don’t like to fish, they’ll take you hiking or kayaking. 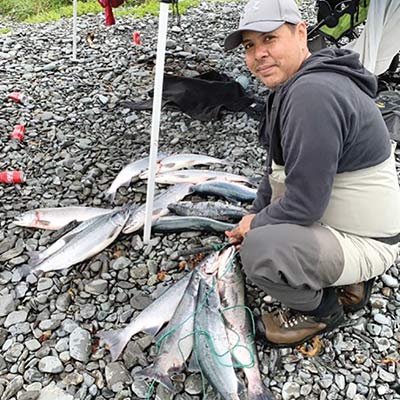 Their eldest son, 15-year-old Exavien, is in charge of kids’ trips (don’t worry, Dustin or Jenelle always tag along to make sure everyone is safe).

Their rates are quite affordable, starting at $150 for a three-hour salmon excursion, or until you catch your limit.

It should be noted that fishing in Alaska is not for the faint of heart. It’s not uncommon to encounter a moose, a bear or even a wolf.

“The rule is, if we see a bear, you leave your fish and get out of there,” Jenelle said.

But the biggest pests are the eagles.

“As soon as you bring the fish to the surface,” said Jenell, “they swoop in and take it.”

Plans for the business? If it keeps expanding, Dustin plans to quit his day job as a contractor and run Spin Your Reels Alaska full-time. This winter, they’re looking into purchasing snow machines to quickly get clients into remote rivers and lakes (or just a scenic ride for the non-fisherfolk).

“It’s delicious,” enthused Jenelle. “We’re going to start selling it as soon as we get FDA approval.”

But ultimately, the plan is to move back to Diné Bikéyah so that Exavien, his younger brother Uziaz and baby sister Juniper can see where their roots are.