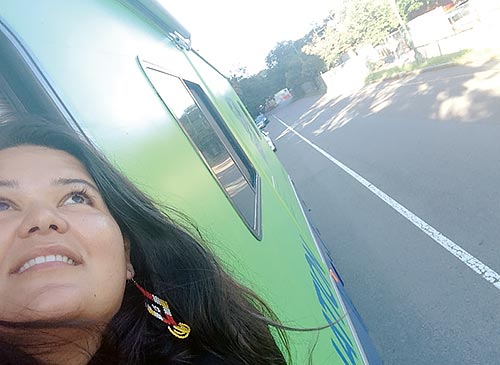 Robin Máxkii looks out the window of the green van that was her home for a month as she participated in the "Code Trip" segment of "Roadtrip Nation." (Courtesy photo)

Robin Máxkii looks out the window of the green van that was her home for a month as she participated in the “Code Trip” segment of “Roadtrip Nation.” (Courtesy photo)

Imagine this: You’re put in a van with two other people you never met before.

The van will be your home for the next month as you drive clear across the country.

You will sleep in it while parked along a roadside or in a Wal-Mart parking lot, bathe as best you can in ponds, lakes and public fountains, and — oh yeah — along the way you’re instructed to convince the leaders of America’s technology industry to let you interview them on camera.

And for Robin McGee Máxkii, it was the trip of a lifetime. Which is saying something, because she has taken a lot of trips in her young life.

Máxkii, a member of the Stockbridge-Munsee tribe, was part of the aforementioned trio, along with a Brazilian-American woman and a Mexican-American man.

“The Green Van” was home to Robin Máxkii and two other young people as they traversed the country interviewing leaders in the technology field last month for the show “Roadtrip Nation.” (Courtesy photo)

The producers of the segment, titled “Code Trip,” chose the trio because they represent groups that are underrepresented in the technology field: minority women, in the case of Máxkii and Natalie Melo, and in the case of their companion, Zoed Mora, the hard-edged, handsome motorcyclist who doesn’t fit the geeky stereotype of people who are interested in computers.