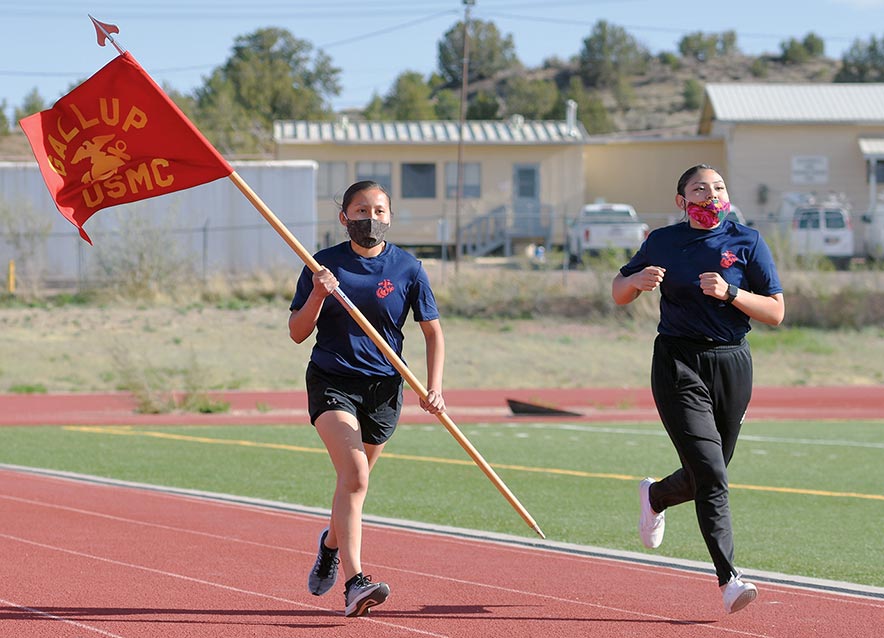 Navajo Times | Donovan Quintero
Jenell Lewis, left, and Sharmayne Morgan run on the Miyamura High School track on Monday in Gallup. Lewis is leaving in June for the Marine Corps boot camp and hopes to attend the Marine Corps Recruit Depot in San Diego. Morgan is scheduled to leave in November.

It’s not about being first, it’s about showing the men they’re just as capable.

Jenell Lewis and Sharmayne Morgan, both 18, aren’t concerned with wanting to be the first Navajos to go to boot camp at MCRD-San Diego.

Pvt. Jordan Peshlakai from Naschitti, New Mexico, became the first Navajo woman to graduate from there.

For them it is more about helping one another get better, to be better prepared to become U.S. Marines.

“Come on, beat my score,” Lewis said as she encouraged Morgan to do more pushups. “Keep going, keep going, come on. There you go. Keep going. Come on, five more.”

Lewis, who is graduating from Valley High in Sanders, Arizona, said the challenge to become a Marine, to possibly train where Peshlakai did, to earn the title on the training grounds as the legendary Navajo Code Talkers did, was an opportunity she could not let slip by.

“San Diego was my first main choice once they brought it up, because our code talkers first stepped foot on there,” she said, “and now having the first sister to step onto those yellow footprints where the code talkers stepped onto, it would be a real great honor to step where they stepped, and follow the path that they have given us and the choice that they have given us so it’s blessed to be a part of who we are, Native American, respect who we are.”

Morgan reiterated Lewis’s words and added that for her it was a chance to continue showing her younger siblings anything was possible so long as they put in the hard work.

“I always was a role model for my younger siblings and everything,” Morgan said, “so becoming a Marine would be an honor.”

“I decided to join the Marine Corps because it’s a challenge, and it mentally prepares you for life ahead,” Lewis said. “It’s a title that you will always be excited for.”

Lewis added she is going to be first in her family to join the military. She is also the youngest, she said.

Lewis’s goal to become a Marine began when she was 16. She said she started participating in physical training functions and enlisted once she turned 17.

The decision to join was easy. And while her family was supportive of her choice, her mother, who she said is a traditional Navajo, was against her plans to join the Marine Corps.

“In the beginning, my mom was not agreeing with what I want to become until she realized how many months I have left,” Lewis said. “My mother has now accepted what I have signed up for, she now fully supports where I’m heading off to.”

Morgan said it was not as hard since her stepmother is a Marine Corps veteran. When she told her family of her goals to become a Marine, she said her stepmom began to tell her what to expect.
“The thrill of boot camp, most definitely,” Morgan said. “And the challenge of the mental and physical training that they put you through.”

Both said they quickly accepted the chance to attend boot camp in San Diego when their recruiter, Sgt. Brandon Drennan, said the possibility to train there became real since Peshlakai and 59 other young women from across the country volunteered to train there.

“We can overcome the impossible as Peshlakai first became the first Native American woman to attend MCRD San Diego and graduate,” Lewis said. “That shows that us, Morgan and I, can beat the impossible that women shouldn’t be out on the sidelines. So, we can do this, we can.”