Sand Devils working toward 3A championship 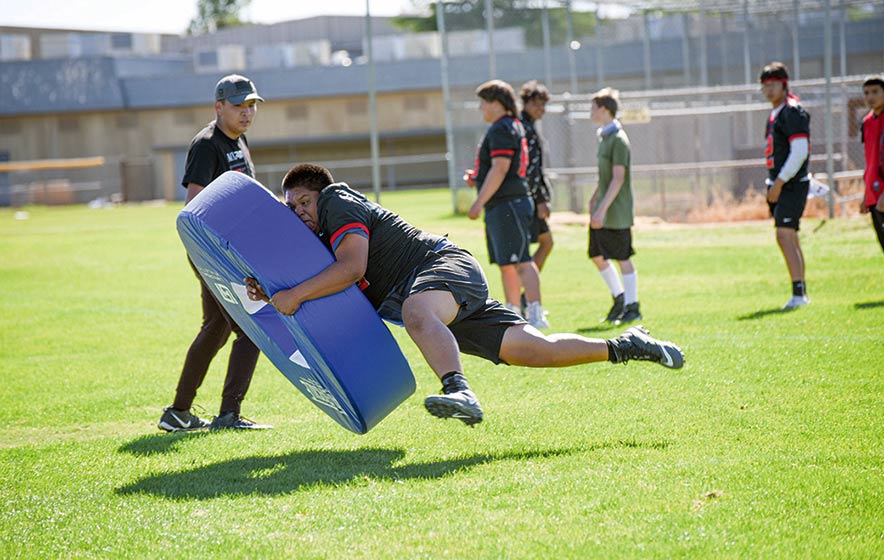 Page High football coach Leland Billie and his varsity Sand Devils team are working toward the 3A North championship.

Billie, better known as “Bubba,” and his team took it hard when the coronavirus outbreak was declared a pandemic, closing the Sand Devils’ athletic fields and darkening the gymnasium last spring.

For months, a tangle of rules and restrictions from the Arizona Interscholastic Association forced Billie and his team to adapt.

Vaccine rollouts and warmer spring temperatures have prompted the OK for team workouts on the field, said Billie.

“A lot of our student-athletes, they live to be on the field,” Billie said. “And when we got the OK to start workouts –– I see something different with this group of kids. They’re pushing each other hard already. It’s pretty cool to watch.”

The Sand Devils’ first game is set for Aug. 27 against the Kanab Cowboys. Playing against 2A South Kanab was only a dream, said Billie.

“They’re only an hour away (northwest of Page),” Billie said. “That’s a game that we’ve talked about. Even the last six years I’ve been here I’ve always mentioned that it’d be cool to play Kanab.”

Billie said he started communicating with Kanab’s football coach, JR Quarnberg, last year to make it happen. Now, the Sand Devils will play Kanab at least once a year.

“We’re going to host them in the first week (of the season),” Billie explained. “It’s good for our fans and the (team). We always get stuck traveling long distances being way up (north).”

But the Sand Devils are looking to have a successful season and they want to be the 3A North champions and to overachieve. And ultimately, they would like to have successful student-athletes.

“We want to make the playoffs,” Billie said. “Most importantly, I want these kids to be successful in the classroom. With COVID, it was difficult with virtual learning. Our ultimate goal is to get these kids to the next level: high school graduation, college, and successful persons in the community.

“I’d like for them to get out of Page. They can come home when they’re ready, but (I want them to) experience life in the world, which is a big part of our goal: to have these kids become positive members of the society.”

Billie said Page has some tough opponents in the region, such as Ganado, Monument Valley, and Window Rock.

Two years ago, the Sand Devils went into a triple-overtime with the Ganado Hornets, but the Sand Devils ended up losing, said Billie. This means that to win games against their toughest opponents, the team must stay healthy before region play.

“If we can do that, I think we’ll be OK,” Billie said. “Monument Valley is going to be tough. Coach Bryan Begay has a great program over there and hopefully they can get things rolling here soon, the rest of the Navajo Nation as well.”

Billie said there are several factors to winning football games, but the little things like tackling and sustaining blocks are what his the team is focusing on right now during spring workouts.

“This group of (six) captains that I have this year, they’re already putting in a lot of work,” Billie explained. “And we started meeting with the captains in January because I really want to develop my captains into leaders on and off the field.”

“We tried to keep (everyone) active,” Billie said. “We weren’t sure what was going to happen. And our biggest chunk of work came over the winter when my coaching staff put together an online workout system where the kids could log in – like they do with their virtual learning – and completed (physical) workouts. The kids did a really good job.”

Billie adds that he gives the Sand Devils team a lot of credit for persevering over the last year, which seemed like riding a roller coaster.

“Definitely, they’ve risen above this COVID thing and they just continue to fight and fight,” he added. “And that’s what they’ve done. That’s what (the outgoing seniors) did playing football. And they’re (all) continuing to do that in other areas of their lives.”