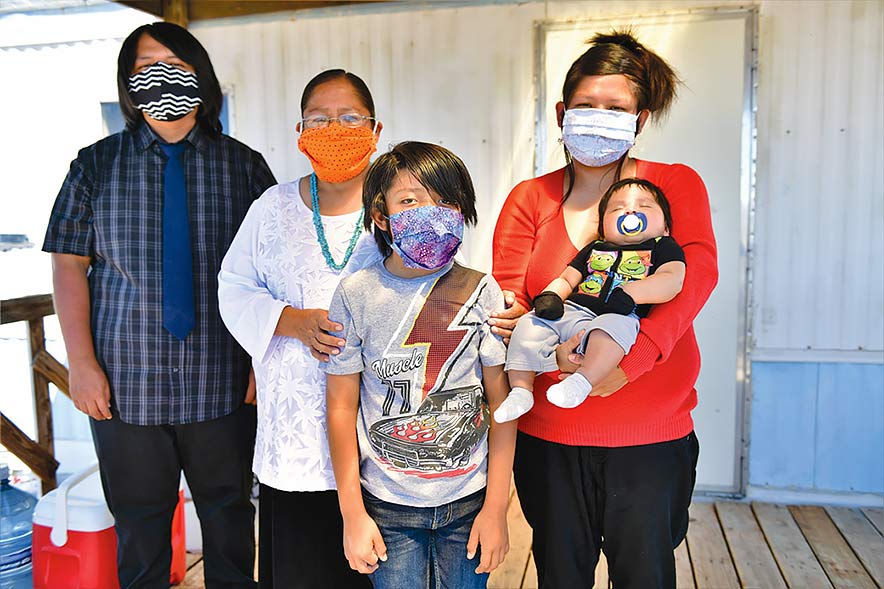 Special to the Times | Bazhnibah
Darnell, Loretta, Eli, Christine, and Timmy stand on their front porch wearing masks in Aneth, Utah, a desert town in the northern part of the Navajo Nation.

By Bazhnibah
Special to the Times

The vast land with reddish rocks and red sand and hardly any signs of human life filled me with thoughts of isolation and remoteness as we drove through Arizona, New Mexico and Utah.

This seemed like the perfect place to isolate oneself from the rest of the world once the novel coronavirus was on Navajo Nation soil and those who got it were told to “self-quarantine.”

Early in March, I remember sitting in the Navajo Nation Council Chamber in Window Rock, listening to a discussion on the subject. No one really knew about what COVID-19 was and could do.

Everyone was fearful and the medicine people asked questions, whether this “thing” had eyes and a mind of its own. “Where did it come from? Will it come here? How will we deal with it?” were some of the questions being asked.

Two months later, we heard about a young man and his story.

In the small town of Aneth, Utah, my husband and I were met by Darnell, who was one of six people in his family who had contracted the coronavirus. Darnell’s mother Loretta, older sister Christine and her two-month-old baby boy came out of the single-wide trailer onto the wooden porch to meet us. They were cordial and we exchanged pleasantries. We all wore masks. We kept ourselves distanced six feet apart. They knew the rules as we did too.

The family of six had all been infected with the coronavirus! Darnell said, “Mom got sick starting with body aches and shortness of breath for a week, and then with fever for two days.”

That was around April 27. When they felt that they were in a critical stage on May 3, the mother and father went to the IHS hospital, which was an hour drive away. The nearer clinics, in Montezuma Clinic and Blanding, had closed their doors because of the pandemic.

At the hospital, both were tested using a rapid test resulting in a “positive.” Both were admitted to the hospital as they were in serious condition. They were separated in isolation rooms. Loretta stated that her oxygenation level was at 82% and both she and her husband were placed on high-pressure oxygen. At the same time, her husband had become very short of breath with a high fever. His condition was more critical and a transfer to a hospital in Albuquerque was arranged.

The whole time at the hospital and during transport, they were not able to communicate nor see each other. Then came the blow. Her daughter told her that “he didn’t make it.”

Loretta couldn’t believe what was happening. “I was in shock,” she said. “I really needed to talk with someone, and Mental Health helped me.” In the ICU for four days, she received medications, oxygen and a blood transfusion. The rest of the family was told to stay home and quarantine.

A few days later, Darnell and the rest of the family also got symptomatic with COVID-19. He went in for testing and as he knew, “it was positive.”

He said that he had “fever some days” and that he was very afraid of getting the shortness of breath that he saw his parents exhibiting. He also lost his senses of smell and taste. “I took Vitamins D and C, made sure I drank hot liquids like tea,” he said. “It helped me. I stayed home and washed my hands frequently.”

His sister, Christine, had mild signs and symptoms with a fever, headache, coughing and fatigue.

His younger brother, Eli, also had mild signs and symptoms while baby Timmy was fine. “We didn’t let any visitors come even when the relief groups came,” Darnell said. “I didn’t want to put them in a bad position.”

When asked about what he thought his mom went through emotionally, he said, “I’m sure she was worried about how we would manage if she passed away. For us, she’s the glue that hold us all together. That’s why she was persistent in her fight and pushed herself to get back to 100%.”

He said, “Moral support was important but getting together and praying as a family for spiritual health was just as important to us as physical health. I feel going through this experience together has made us closer as a family.

“Although we are cleared from quarantine, we still ask each other every day how we are feeling to make sure we are staying healthy.”

Back on the road, I sensed that Darnell’s and his family’s experience could be many of the Navajo people’s experiences and that we are all very vulnerable to this horrifying virus called COVID-19.

I wondered how the medicine men were now defining this virus and if they are now able to characterize it after the three months of the pandemic.

Ruth Kawano is a retired registered nurse who works under her given name, Bazhnibah. She is a retired U.S. Public Health Service captain, U.S. Air Force veteran and a writer and photographer.