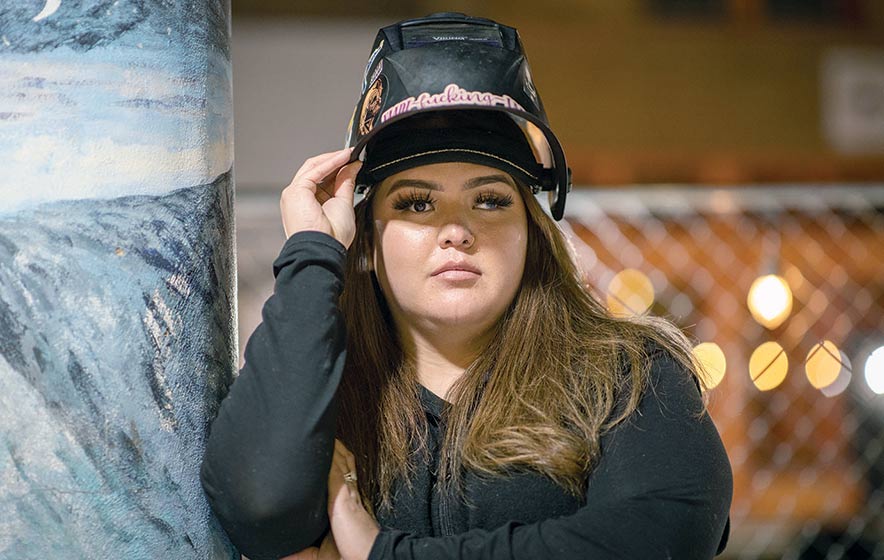 Gleason remembers when she was a student at Window Rock High and how she wanted to enroll in a welding class, but due to limited availability, and her advisor dissuading her from pursuing the male-dominated trade, she eventually stopped trying.

Fast-forward nearly a decade and Gleason is well on her way to becoming a certified welder after she completes her courses this March from Universal Technical Institute. “Ever since I was in high school I wanted to be in the welding classes,” said Gleason. “Talking with my advisors and counselor they were like, ‘It’s not for you,’ and it was mostly filled with the boys who don’t have a career in welding now. It was infuriating.”

Getting into welding school was no easy feat, and not only because her high school wouldn’t let her enroll in the welding class. Growing up, Gleason was a talented basketball player.

She played for the Gallup Bengals and St. Michaels Cardinals, but a freak accident while playing with some older girls left her with a severely injured left eye, which has only gotten worse as she grew older. Ultimately the injury ended her basketball career.

Trying to salvage her vision, Gleason had cornea transplants and a placenta procedure, where they placed placenta on the eye in hopes of the eye restoring itself, but the effort did not really take. Her vision isn’t completely restored, but she still has peripheral vision. “When my depth perception kind of got lost in my left eye I had to reteach myself how far things are,” said Gleason. “So I trained myself with make up.”

Before starting at UTI, Gleason had no welding experience. In fact, her previous job was being a certified MAC makeup artist. Like she had mentioned, makeup had become a way for her to regain a vision function most take for granted. “How I started with makeup was trying it on myself,” said Gleason. “I didn’t do very well the first two years. Teaching myself to know the depth perception … was muscle memory.”

One probably wouldn’t guess the skills and precision of putting makeup on oneself and others would be beneficial when it came to learning how to weld, but that was exactly the case for Gleason. When she was having a tough time in her welding course, her instructor asked his daughters for advice on how he could help Gleason understand what he was trying to teach her.

“I firmly believe training myself to put makeup on myself and others actually got me to the point to know where to put the filler placement metals at now,” said Gleason. “At first I didn’t understand what to do because I couldn’t see it. “My instructor said, ‘I was talking to my daughters and they told me … I should compare it to you doing your eyeliner,’” she said. “Once he told me that I was like, ‘I got this!’”

With this type of explanation, seeing what she is doing, and muscle memory, Gleason said she is able to weld with one hand. “That muscle memory helped me with everything,” said Gleason. “How it should feel. How the gun should feel in your hand, the sound of the metal filling in, and how the gas sounds.”

Gleason is one of two girls in her specific class, but in the incoming group another three girls have started and they wasted no time asking Gleason for assistance.

As she becomes more familiar with her tools and learning is no longer a problem, Gleason has risen to become one of the top students, a distinction she is proud of because it has earned her respect among her mostly male class to the point to where they ask her for advice. But they’re also curious about her visibly injured eye, something she isn’t shy to talk about.

“They ask me what’s going on with my eye,” said Gleason. “And I tell them ‘I have a cataract.’ And they’re like ‘So, you’re only welding with one eye!’” Not only one of the few women in the class, Gleason is also the only Native American student.

Gleason shares her upbringing without running water and other living situations that are common on Navajo. She also tells them about the scarcity of jobs on the reservation. “I tell them here (Navajo Nation), there’s no jobs,” said Gleason. “It’s not what you know, it’s who you know. Regardless if you have a degree … it’s going to be hard for them to hire you unless you stick your foot in there and keeping bothering them.”

From a makeup artist to a welder who wears makeup every day to class, Gleason has come a long way — from having never held a torch to being able to weld with one hand. She’s looking forward to finding what is in store for her as she nears the end of her courses and although her high school wouldn’t help her with getting into the welding class, she’s happy that they didn’t squash her dream.

“Do it,” says Gleason to women who want to go into the welding field. “Just do it, even if you’re scared!” she said. “I think women getting into industry and getting into trade school would benefit our community a lot.”