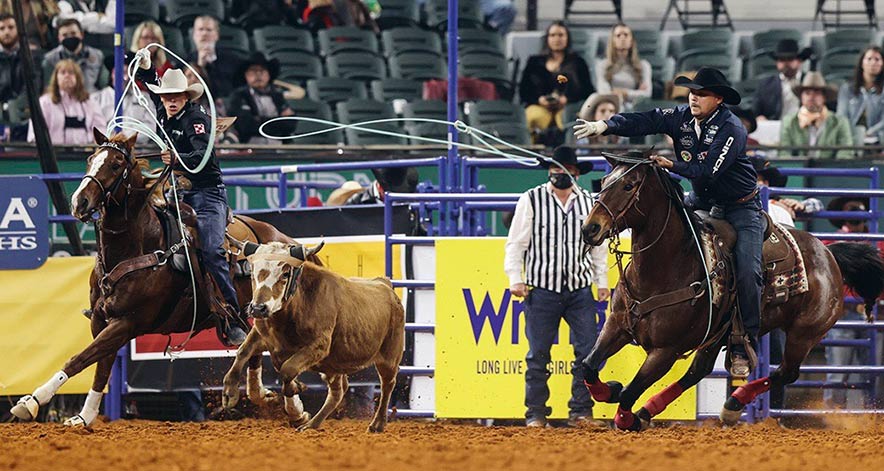 PRCA PRORODEO | Roseanna Sales
Diné team roper Erich Rogers (right) throws his loop in Round 10 of the Wrangler National Finals Rodeo on Dec. 12 while heeling partner Paden Bray waits his turn. The two cowboys won the aggregate race at this year’s finals by roping all 10 draws in 80.2 seconds.

Erich Rogers has described the Wrangler National Finals Rodeo as a marathon.

This year was no different, as the 2017 world champion needed every one of his runs to claim the aggregate race with heeling partner Paden Bray at the 2020 Wrangler National Finals Rodeo at Globe Life Field in Arlington, Texas.

“This is another big win for me and Paden,” Rogers said. “Not every day you get to qualify for the Wrangler National Finals Rodeo and try to win the average.

Rogers said winning the average title is like winning a world title.

“The average is a coveted buckle,” he said. “It’s tough to win and when you get it it’s a good feeling.”

Before this year, Rogers said his best finish at the NFR was in 2017 when he captured a world title with Cory Petska. That year they roped nine steers and they finished the aggregate race in second place.

“I missed one that year,” Rogers said.

At this year’s finals, the Rogers/Bray combo recorded half of their runs with penalties but they were the only team to rope all of their draws.

In their final run on Saturday night, they posted a 5.6 run for fifth place as they roped 10 draws in 80.2 seconds.

“My thought was to just catch,” Rogers said. “I told Paden that we were gonna to do what we do. Our goal was to win the average and if we got the gold on top of it that would have been great.”

The two cowboys came close as Bray finished as the reserve world champion while Rogers came in third in the world standings.

This year’s coveted world championship gold buckles went to Colby Lovell and Paul Eaves as they won Round 10 with a 4.4-second run.

“(Paden) lost the gold buckle by about $3,000 and that’s a crazy scenario for a rookie heeler,” Rogers said. “He had an opportunity to win a gold buckle and if it ended in the ninth round he we would have been a world champion.”

Nevertheless, Rogers said Lovell and Eaves “made one of the greatest runs ever.”

“They made a clutch run,” he said of the two world champions. “They had to win the go-round to win the gold buckle. We’ve all practiced those scenarios from dummies to practice pens to setting ourselves up for that.

“Those guys did a great job,” he added. “They stepped up to the plate and they knocked it home. It was awesome and it was a cool feeling to watch them do what they’re supposed to do. They got themselves a gold buckle.”

The Round Rock, Arizona cowboy credited Bray for staying the course during the 10-day finals even though this was Bray’s first NFR.

“Payden did an outstanding job all week,” he said. “We got ourselves an average buckle and a go-round buckle so we can’t complain.”

Bray said he was “very blessed” to have a great partner in Rogers as the two cowboys collected $122,961 at the NFR.

“We got all 10 steers caught and I’m just very grateful,” he said.

Of the 10 rounds, the pair placed in five with their best finish taking place in the opening round on Dec. 3.

“To draw blood here on the first night was awesome,” Rogers said of their first-place run of 4.8 seconds. “The steers are a little stronger and the crowd is just awesome. It’s not near like Vegas but it’s getting there. We set up our week.”

“That steer kind of hit pretty fast away from me but I knew where he was going,” Bray said. “It probably looked a little scary but if felt pretty good.”

With a much different setup from what they normally see in the Thomas & Mack Center in Las Vegas, Rogers said they had to make some necessary changes as the COVID-19 pandemic moved this year’s finals to Texas.

“It’s dang sure a different playing field but it’s electrifying like always in a big stadium,” he said. “It’s awesome.”

“They’re definitely more out in the open and some guys had some tough luck,” Bray said on Dec. 3. “There’s a lot of ground to go catch them in and that’s good and bad, so guys will dang sure have to cowboy up and ride their horses this week. It kind of feels like AT&T next door if you ask me.”

As part of the longstanding tradition of the NFR, the pair was awarded go-round buckles for winning the round. Bray gave his first-ever buckle to his dad, Ken.

“We’ve been rodeoing all year long and I know Paden wanted to give this buckle to his dad,” Rogers said. “He’s one of the coolest cats that I know and Ken Bray you deserve this.”

In addition to their opening round win, the Rogers/Bray combo collected three sixth-place checks in Rounds 5, 7 and 9 before they capped the NFR with a fifth-place check in the final round.

In this unusual year under the umbrella of the pandemic, the two cowboys expressed their gratitude for the rodeos that were held this season.

“To all the committees that put up a rodeo throughout America we’re just lucky and blessed to be there and show up, and give us an opportunity to win a bunch of money,” Rogers said.

With the 2021 season having already started, the two cowboys are committed to roping with each other next year.

“Man, it’s pretty good,” Rogers said of the partnership. “Paden is a young kid and he knows what kind of veteran header he has – a header that catches a lot of steers and gives him a lot of opportunities.

“The kid ropes good and I know what he can do,” he added. “It’s just one of deals where the chemistry is there and it works out. We’re going to try and keep going in 2021 and see how it goes.”