Writtyn for life: Kari Denny-Flynn journeys from rapping to teaching 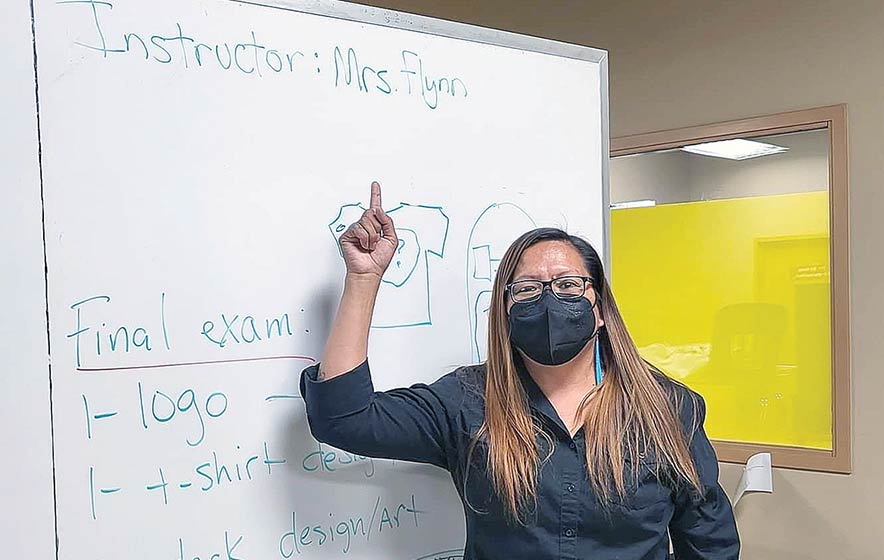 When the employers asked why she wanted to be a teacher, she rapped the answer.

“The long walk back to where I call home,” she said in her rhyme. “This is where all my Diné people roam.

“I left to learn and bring it back here,” she said. “Shi Dine’é, I never left; I kept you near.

“My culture always keeps me innovative. While my family keeps me elevated, Mother Earth always reminds me to stand proud.”

Kari Denny-Flynn, who goes by the stage name Writtyn, a proficient lyricist and storyteller, said she told the prospective employers at Kayenta’s Northeast Arizona Technological Institute of Vocational Education that her rhyme is from her poem, “Home.”

Home is about leaving the Navajo Nation when she was younger to learn about life, travel, and gain knowledge about the world so she could take it home to Tódinéeshzhee’.

She said the power of positive thinking stands out among the essential life lessons and skills – such as rapping and graphic design – she learned during her time away from home.

“And that’s what I’m doing,” Denny-Flynn said. “I wanted to be a teacher.”

NATIVE partners with sites to provide career technical education for its students.

“I call this my home, where I was raised,” she said. “I started from rap to poetry and from graphic design to teaching. All of that coincide.

“Everything that came up to where I am now fell into place,” she added. “I’ve done everything that I wanted to do on my life checklist, such as performing across the U.S. I inspired people and did graphics for my favorite performers.”

A couple of hours after her interview, NATIVE District Superintendent Ron Tsosie sent her a message reading, “Hello. We enjoyed the interview today, and we would like to recommend you to our governing board for hire.”

The superintendent said that if the board approved the recommendation on April 21, the employers would make her a job offer.

The board that Thursday approved the recommendation, onboarding Denny-Flynn as a graphic design teacher for the remainder of the school year.

“Congratulations,” Tsosie added in his message.

“It happened so quick – within a couple of hours,” Denny-Flynn said. “I was so nervous after the interview and took a (nearly two-hour) nap because I kept thinking when they (interviewers) would get a hold of me.”

Denny-Flynn said she showed her best, authentic self to the employers and didn’t pretend to be perfect.

She showed them her true self and demonstrated why her personality is the right fit for the job.

“I told them, ‘This is the passion, this is the lifestyle. In general, I’ve been doing this – motivating our people and our youth,’” she said. “And music. I do music reviews (on her online show Yay or Naye).

“Before I got the position, I asked myself if this was what I’m supposed to do – to keep doing graphics and music videos. The next day I got a call I should look into a position at NATIVE, and I did.”

But to get the position wasn’t an easy feat, said Denny-Flynn. It was a long, sometimes nerve-wracking process to get her state educator certification.

“But it was worth it,” she said. “It was only nerve-wracking because you go through a background check, fingerprinting, and submitting the application for certification.”

When she earned her certification, one of the first persons she told was her best friend Rhonda Duvall, who goes by the stage name Honey, who she’s worked with for more than a decade and rapped with onstage.

“She’s one of the people who helped me get my certification,” Denny-Flynn said. “It’s been a great journey, and for me to become a teacher, it’s surreal.”

When Denny-Flynn is onstage, it’s all about lulling the audience into a critical and analytical state of mind through poems and storytelling.

“I started off rapping and doing inspirational speeches about drugs and alcohol awareness,” she explained. “It went from rap to poetry about domestic violence, suicide prevention, where I come from and how I was raised. I’m Diné.”

Denny-Flynn said she started rapping about silly things at 14, around the time alcohol interfered with her life.

But when she got pregnant with her first daughter, she promised her that she’d become clean and sober.

“One of the first songs I did was about being in a relationship with an alcoholic, which set it off,” Denny-Flynn said. “People heard that. Abuse, domestic violence – these went to inspirational speeches with Honey, and we went all over the Navajo Nation on tour around 2010-11.

“People felt it, and I inspired a lot of people,” she said. “There are people who’ve come up to me to tell me they’ve been sober for so many years and got out of a violent relationship just from listening to my songs.”

Denny-Flynn said all the songs and poems she’s written throughout her life are true to her heart.

“I’ve cried on all of them when I wrote them,” she said. “And I knew people would feel it too. I just want to help people to let them know they aren’t alone.”

After four days of shadowing a teacher at NATIVE, Denny-Flynn, on April 29, taught a class on her own.

“It was good, and it seemed so natural,” she explained. “Next year, I’ll get to make my syllabus and my planning, and it’s going to be a good transition.

“This summer,” she said, “I’ll be attending conferences to get help/training on lesson plans and scheduling.”

Denny-Flynn said before her certification process happened, one of the N\ATIVE staffers showed her prospective classroom and office area, speaking as though she already was on the payroll.

“I’m very humble, but I was anxious,” she said. “That night, I applied for my fingerprints and paid for it. Then the next day, I went to get it, and 46 weeks later, I got it in the mail. When I got it, I applied for my educator certification and got everything I needed.”

An hour after her certification was approved, she informed one of her district contacts, who told her she needed a hard copy of the accreditation for hire. Because it would have taken more than a week to arrive in the mail, the district allowed for a screenshot.

Denny-Flynn is also a full-time university student. She’ll graduate next year with a bachelor’s in graphic design.

Her graphic work can be seen in magazines, on billboards, on the back of semis traveling across the U.S., and locally during the Western Navajo Fair.

She’s a woman who stridently avoids following trends and bowing to societal pressures but will only be honest without avoiding any unpleasant details.

“I made it! I cried because this is where I’m supposed to be,” Denny-Flynn said. “Everything that I’ve done in my life I don’t regret.

“There were times I had to travel from place to place for a performance, and I wouldn’t get paid until after the performance,” she said. “I remember traveling from Salt Lake City, and I didn’t have any money to get to the Western Navajo Fair for a performance.

Denny-Flynn said she’s excited to be a teacher.