Several Navajo professionals are sharing the honor of being named to the 12th class of the National Center for American Indian Enterprise Development’s 40-under-40 award.

“This is one of the top honors in Indian Country,” said Chad Marchand, NCAIED’s vice president. “It’s an award where you’ve been nominated by your peers,” he said. “We recognize everyone from academia to those working at nonprofits and doing government work, to those working in the legal and medical fields, and they’re all from across the country – that says a lot about all the great work people are doing.”

As for the annual banquet, where the recipients are honored, Marchand said NCAIED officials plan on going forward with planning the Reservation Economic Summit, more commonly known as RES, but will likely offer the event in a hybrid format to accommodate those with COVID-19 concerns who want to attend virtually.

There were five who identified as Navajo. 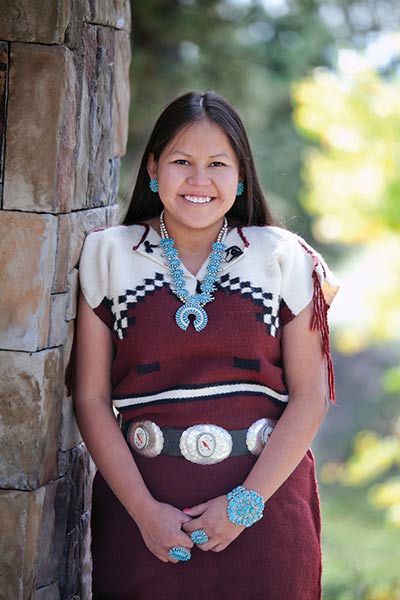 Originally from Coyote Canyon, New Mexico, Charley is the director for Native American Student Services at the University of Northern Colorado in Greeley, Colorado. She earned her bachelor’s degree in sociology from Colorado College, a master’s in higher education from the University of Denver, and her doctoral degree in education leadership from Pennsylvania State University.

“I am deeply humbled by being recognized,” said Charley from her home in Colorado. “I enjoy and appreciate the time I share with the students, and it is humbling to be recognized for being of service to the students and community.” In her role as director, Charley said her work is expansive.

She works from recruiting students to increasing higher education knowledge among high school and middle school students, in addition to providing support – emotional, academic, and social – for the current Native population of UNC. In addition, she works with university officials to find ways to address the issues that Native students encounter, while also working directly with students one-on-one and ensuring they meet academic standards.

“Many of the challenges they face range from different things,” Charley said. “I stress to the university that our Native students are cornerstones of their families and they face pressure to perform well in college.

“But I also try to get them to understand what their absence means for their families,” she said. “I help them to manage their roles and responsibilities of being a son or daughter, brother or sister … while also being a student. “We have a responsibility to take care of the students for their families while they’re in college and to help the students not only navigate the higher education system, but also to protect the significance of their lives,” added Charley.

She has been the director for seven years.

“When people leave the reservation, we forget how sacred that journey is,” she said. “That is where a lot of the struggle comes from for these students. “My job and the promise I make to the parents is that their child will be taken care of and I take that responsibility seriously,” she said. “I am very grateful that the university has offered the tools and resources to make this a priority.”

Calista Pinnecoose, originally from Sweetwater, Arizona, is the president of North Stone, LLC, a subsidiary of the Diné Development Corporation, located in Odenton, Maryland.

North Stone provides information technology services to federal agencies. According to its website, it is the newest company in the DDC family and specializes in information assurance, cyber security, business process improvement, and network operations.

“It is an incredible honor to be named a 40-under-40 recipient,” said Pinnecoose from her home in Virginia. “I am really happy I am able to give back to my Navajo people and be able to continue to learn and be a part of something greater.”

Of her job, Pinnecoose said her task is to “get business and help make the revenue, which is then given back to Navajo.” Pinnecoose continues to be a part of the program that prepared her for her position, called “DDC university.”

“The idea was to be able to grow our own Navajo leaders,” she said. “It has been hard to find Navajos who had the qualifications and skills to run an IT and engineering company in the federal contracting realm, so DDC created this program and I was the first one to go through it.”

Pinnecoose added there are currently eight other Navajos going through the program, some of whom will likely run future DDC subsidiaries. She said it has been challenging finding her voice in this field.

“In the very beginning it was very intimidating,” said Pinnecoose, adding that her mentor, DDC CEO Austin Tsosie, “helped me realize that I have every right to be at the table and make my voice heard. Through his knowledge transfer and training, I overcame that and I try to pass that on to other Native women.

“As Native women, we are taught not to speak up and this was one of the biggest hurdles I’ve had to overcome,” she added. “It is important to teach the younger generations that you can be a leader. You can make a difference no matter where you come from, no matter what your background is or how you were raised.” 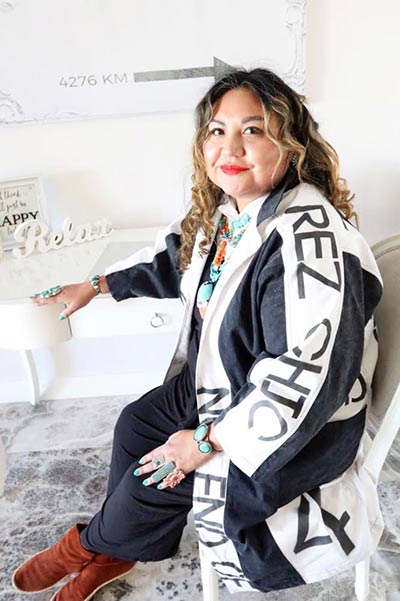 Crystal Lee, an assistant professor at the University of New Mexico whose maternal roots are in Teesto, Arizona, and paternal roots in Steamboat, Arizona, was also named to the list.

Among other accolades and positions, she is the founder and CEO of United Natives, a nonprofit organization that serves Indian Country. “I feel honored,” she said, “but to be among those that were selected, to be in the cohort of my peers who are doing amazing work in their own accord, makes me feel very honored because everyone is doing amazing work in our communities.”

In addition to her research, Lee led efforts in the Phoenix area to establish a quarantine site, which involved renting 186 hotel rooms to house COVID-19-positive Native Americans from March to July.

The nonprofit served over 400 Natives and provided three plant-based meals a day, transportation to and from the hospitals, in addition to medicinal therapy and breathing exercises to strengthen patients’ lungs.

“We wanted the body to be as healthy as it could be for the immune system to fight COVID,” she said. “We provided testing services on site and nursing staff on site, and yoga therapy. “We implemented this entire plan and not one of them transitioned into hospitalization,” she said. “They all had a 100 percent recovery rate.”

JT Willie was also named a 40-under-40 for his work as the executive director for the Navajo Nation’s Division of Economic Development.

“I feel very humbled to receive the award because I’ve seen past recipients that have received the honor,” he said, “and to be nominated and awarded, it is very humbling to be recognized for the work you do. It’s also good motivation especially during these times and what we’re going through.”

Willie highlighted some of his biggest projects including updating and passing his office’s internal policies and procedures handbook, and COVID-19 prevention projects that benefit Navajo, among others.

Of the internal policy book, Willie said, “As a tribal division and an entity within the Navajo Nation, a lot of the focus never happens on the inside. “One of my greatest accomplishments was the approval of new policies and procedures as a division that hasn’t been updated or focused on for the last decade,” he said.

“Some predecessors have tried to accomplish this main document.” Willie added that in order to make change outside the office, the internal processes have to be in place.

In addition, Willie helped to spearhead a manufacturing project in Church Rock, New Mexico, that allowed the Navajo Nation to manufacture medical gloves, which were certified by the U.S. Food and Drug Administration and allowed the Nation to supply gloves to the East Coast during its worst COVID-19 hit.

Lastly, Agnetha Gloshay, who is Navajo, White Mountain Apache and Kiowa, was among the recipients but could not be reached as of press time. She is the current project manager for Roanhorse Consulting, LLC., a board member of the Family Independence Initiative, and co-founder of Native Women Lead.