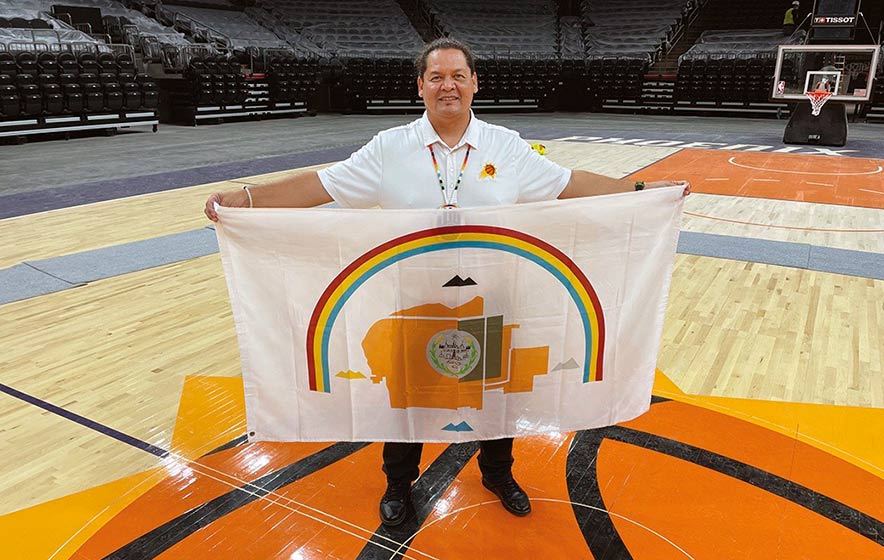 Submitted
Shawn Martinez was recently hired as the senior director for live presentation for the Phoenix Suns. Martinez got his start in 2002 working with the Denver Nuggets franchise.

After many years working with the NBA and other sports organizations, Shawn Martinez, a former Window Rock Scout basketball player, returns to Arizona as the senior director for live presentation at the Phoenix Suns Arena.

He will be in charge of all decisions regarding entertainment at the games, from the music to the spotlights.

Since college, Martinez has worked in Denver and Michigan, working for many different teams and helping host exciting games for a variety of sports.

But when a position opened up back home in Arizona, he jumped at the opportunity to return to familiar grounds.

“I just want to say thank you for all the love and support,” Martinez said, “to my whole family, my Denver family, my Detroit family, my new Suns family and my Navajo Nation family!”

From a young age, Martinez had lived in many places across the Navajo Nation, including Fort Defiance, Chinle and finally Window Rock where he graduated in 1985.

During that time, the one thing that never changed for him was his passion for sports.

Martinez played football, baseball, basketball and ran track while in high school. After graduating he also picked up golf for a while.

“Everything excites me about sports,” Martinez said. “Just being able to have that competition, that competitive edge to have some fun in sports, and that’s what I love about sports and also being a part of it from the sidelines, watching what’s going on the sidelines, watching the competition, how we can help enhance the game through the home-court advantage.”

Martinez would go on to Southwest Indian School, then ASU and then up to Fort Lewis College where he played college basketball.

He would graduate from Fort Lewis with a bachelor’s in communications and fine art with a minor in business.

He began his career in 2002 when he moved to Denver and assisted in hosting the Denver Nuggets.

For over a decade Martinez would work in Colorado with a variety of teams, hosting the Colorado Crush football team, the Colorado Mammoth lacrosse team, Colorado Rapids soccer team and the Colorado Rockies baseball team.

Through the years he worked his way up the ladder, moving from coordinator to manager and then to director. With each job his skills became sharper as he reached his current position of senior entertainment director.

He moved to Michigan where he worked with the Detroit Pistons for six years. This year, he learned that the position was open for the Phoenix Suns and submitted his name for the job. He then made his return to Arizona.

“When I told all my family and friends where I’m heading and my next career move,” Martinez said, “everybody was so excited and the first thing they all said was, ‘You’re coming home.’

“The difference is just being home and feeling like home and knowing where I’m at and I’m very comfortable with it,” he said. “… Man, just the concept of being home, being around our people, being around everybody in the city.”

2 weeks on the job

Martinez has been on the job for two weeks and since then he and his new coworkers are already planning how the first home game will go.

Currently the arena is being renovated, from its infrastructure to its lounge, the project is set to make the arena more modern and enjoyable.

The first phase of the project should be completed by 2021 and the second phase by 2022.

But Martinez says despite the renovations they will be ready when the arena is open.

“It’s just excites me to be a part of it,” Martinez said. “Knowing that I’m working with the home team and once I put the headsets on, I’m in the zone, I’m trying to figure out ways to take people on a journey.”

A big part of the job is the music, something that Martinez is very familiar with having been a DJ for over 30 years.

He learned how to “read” the crowd, knowing the right time to play the right type of music to get both the fans and the players motivated for what will happen next in the game.

The only bleak side for him is the current COVID-19 pandemic. Many arenas and event centers have been closed due to health concerns.

Martinez fully understands the threat and wishes that everyone, especially people back in the Navajo Nation, take care of themselves. Remember to mask up, he said, and try to help one another whenever possible, especially family members.

Excited for next step

Despite that setback though, Martinez is still happy to be where he is now.

“We’re excited to take the next step of the journey for the Suns here,” he said. “So excited to be a part of.

“I’m also excited to be a part of the NABI (Native American Basketball Invitational) Foundation, the Suns have a major piece of that and to be able to do that, if there’s a way I could reach those kids as well and kind of let them know to ‘set your goals high, obtain them, don’t stop if something gets in your way, just keep moving up in how you want to approach life.’

“Like this job is the ultimate job for me,” he said, “I’m so excited to be here. If there’s a way for me to reach some of those kids at NABI and be a role model for them, I’m here for them now that I’m in the city, and I just want to be a positive role model for them.”

For Martinez, this was a long day coming. He still remembers watching basketball on TV, seeing players like Paul Westphal and Alvan Adams playing spectacularly on the court.

It has always been his dream to make it to the NBA, and now he is working with the organization, creating entertainment that will wow people and make them want to come back for more.

He enjoys playing sports and now, as the new Suns senior director for entertainment, he will be helping keep the spirits up for both players and fans, making sure everyone is having a good time.

“It feels so good, kind of choke me up a little bit,” he said. “Being able to come home and be around our people and try to help in some ways, all our tribes as well as our Navajo Tribe, that’s what I’m here for, kind of the bridge to the team, where we can help in any way we can.

“It just means so much that I’m so close to home that I’m here as a role model just to let the kids know, ‘Hey, this is attainable, this goal is attainable, getting to the NBA, being a part of it, being successful and just never stop grinding, you always keep grinding. If there’s an obstacle, find a way to get around it and just keep grinding until you get to the point where you want to be in.’