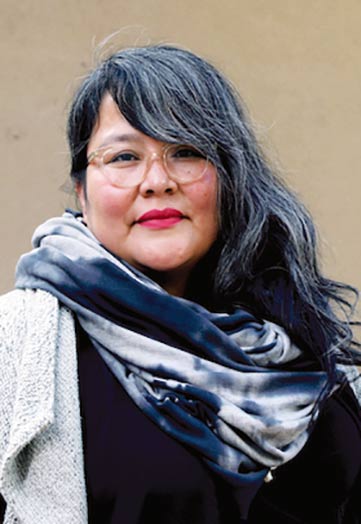 Vanessa Roanhorse is the CEO and founder of Roanhorse Consulting.

Vanessa Roanhorse was living with her husband in Chicago when they had their first child 1,500 miles away from the Four Sacred Mountains.

This distance didn’t sit well with Roanhorse, whose parents live in Window Rock. “I just couldn’t imagine raising him away from this people and his community,” Roanhorse said. “I wanted him to know where he came from.” So Roanhorse packed up her life and moved closer to home. She now resides in Albuquerque.

Little did she know this move would be the catalyst for her to become an entrepreneur and open her economic development company, Roanhorse Consulting. “When we moved back here, I could not get a job to save my life,” Roanhorse said. “I think I had a very colorful resume.”

Fortunately, through the contacts she had created over the years, Roanhorse was able to land a small contract with the city of Albuquerque. This turned into a larger contract and that’s why she had to create her company.

“I couldn’t have my taxes on my business side interfering with my personal finances,” she said. “Thus Roanhorse Consulting was born. It was not intentional. It was messy. I spent a lot of time figuring it out.”

However, Roanhorse said her story isn’t unique – many entrepreneurs go through a similar experience.