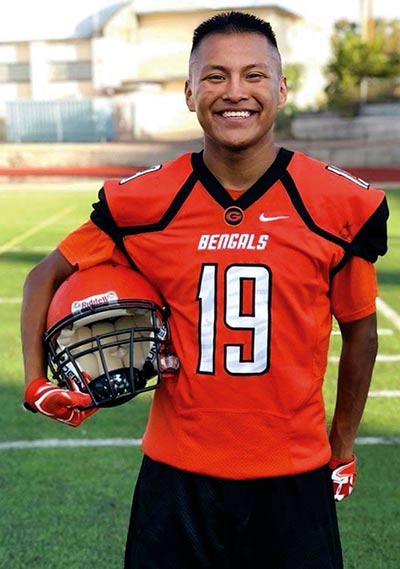 Gallup football player Bryant Jerome Brown hopes to compete collegiately as a walk-on at Fort Lewis College. Brown was selected to compete in an all-star football game in early July.

As soon as he received his letter to compete in an all-star game, Bryant Jerome Brown filled out the necessary paperwork.

The recent Gallup High graduate said he was stunned at first when he learned that he was selected to take part in the 9th Annual Native All-Star Football Classic.

“When I got my invitation I was happy that I got invited but it also surprised me,” Brown said. “I’m excited about this opportunity and I am going to play as hard as I can because I’m going to be representing the Navajo Nation and my school.”

The weeklong event is set for July 7-13 at the Doc Wadley Stadium on the Northeastern State University campus in Tahlequah, Oklahoma.

According to the organization’s website, the event will feature a combine followed by an all-star game on July 13.

“This life-changing camp and game were specifically created for Native Americans and Alaska Native high football players along with Canadian Aboriginals who will graduate in 2019,” the website states.

“Since 2002, this game has given young Native American men the honor to finish out their outstanding high school careers, many of whom go on to compete at the collegiate level while others begin new endeavors outside of football,” it stated.

Brown is hoping to play at the next level as a walk-on at Fort Lewis College in the fall. Nevertheless, he has a backup plan. If he doesn’t enroll at Fort Lewis, Brown plans to go to school at New Mexico Military Institute, studying aero science.

“I like space,” Brown said of his career choice, albeit he’s shown an interest in culinary arts.

As her only child, Jody Brown said she’s happy that her son got accepted to play in the all-star game since she experienced something similar in high school. The elder Brown competed for the USA Track team in Barcelona, Spain, after her senior season at Navajo Pine as a six-time state champion in the discus and shot put.