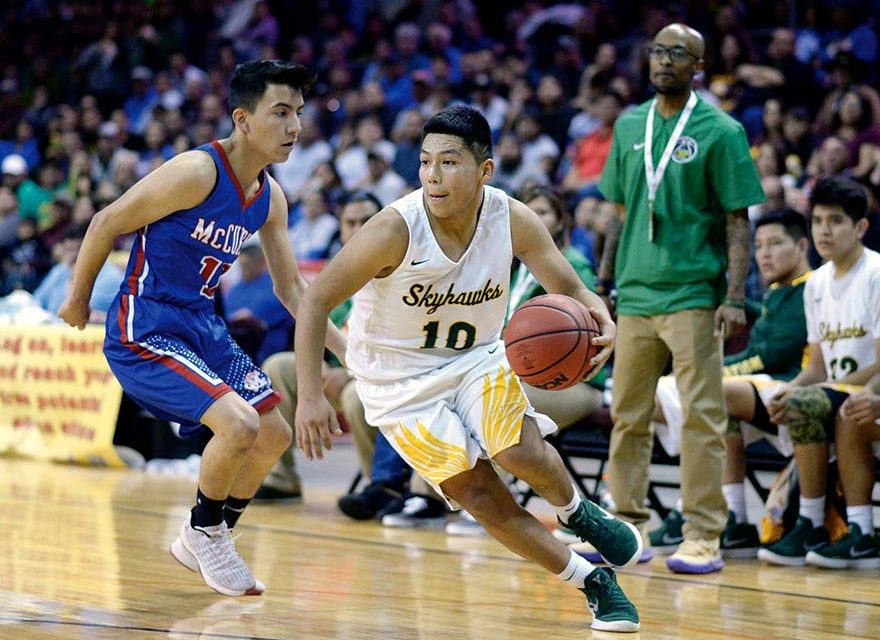 File photo
Newcomb graduate Kelkenny Watchman (10) was selected to participate in the New Mexico High School Coaches Association 2019 All-Star games in two sports. He will play in the basketball all-star game this weekend and next week he will take part in the football all-star game.

A long list of local athletes were selected to compete in the New Mexico High School Coaches Association 2019 All-Star games, which will take place beginning this weekend and well into next weekend.

Athletes from the Four Corners area and Santa Fe and Albuquerque will compete in the all-star games, which will take place at various locations throughout Albuquerque.

Newcomb senior KelKenny Watchman, one of the few selected for multiple sports – football and basketball – said he’s been itching to play basketball and is looking forward to his final high school games.

“I feel really excited, because I’ve been off basketball for awhile,” he said. “And that I’m supporting Newcomb and representing my family.”

Watchman and teammate Shannon Bitsilly were the only Newcomb basketball players selected for the Northwest Small-School boys team.

However, Watchman was also selected to play in the football all-stars game, which came as a shock to Watchman. He said nonetheless, he’s planning to make the most of the experiences.

“I was surprised because I’m not really good in football,” he said. “(I’m looking forward to) making new friends and playing with other people I don’t know.”

Bitsilly said he was surprised by the selection. He said for him its not just about playing basketball.

“It’s an honor to be selected for the all-star,” he said. “To represent my community and where I come from. I’m looking forward to the competition.”