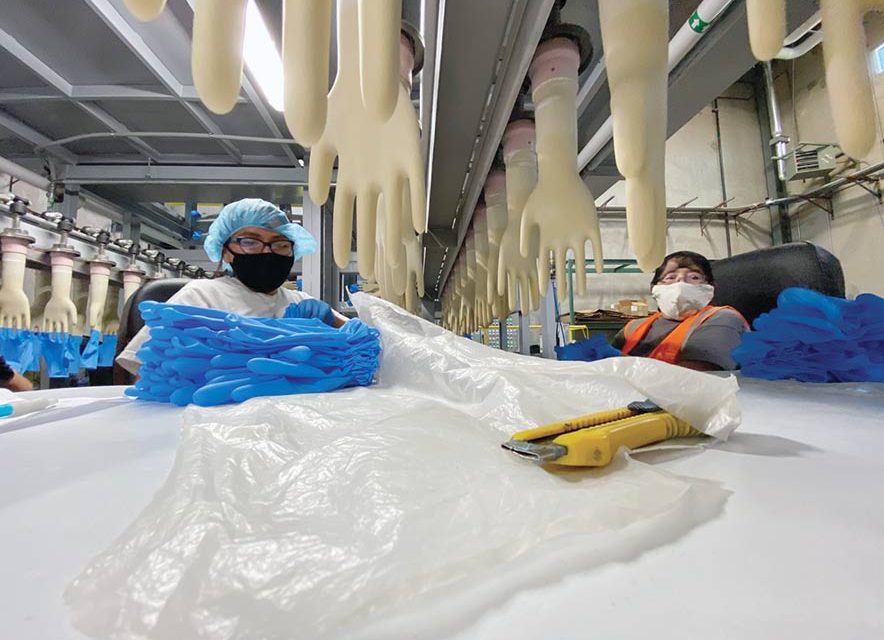 Since the first known coronavirus case on the Navajo Nation was reported on March 17, Rhino Health LLC, the small nitrile glove manufacturing company, was already trying to keep up with national demand.

Nine days later, on March 26, CEO Mark Lee said the company had shipped 1.5 million pairs of the gloves, which are used in the medical industry, to the Navajo Nation, U.S. Indian Health Service and to Public Law 93-638 hospitals.

Last Thursday, employees at the factory, clad in safety helmets, masks, and gloves, busied themselves collecting the product off the manufacturing line.

Since March 26, the company has made approximately 11.2 million pairs of gloves, which Lee said have mostly been shipped to the Federal Emergency Management Agency, U.S. Veterans Administration and federal hospitals. The company has also shipped gloves to New York, New Jersey and Wisconsin. “It’s like a tsunami hit us,” Lee said. “Every single federal agency and state and local people have been calling us. So those are, by far, my priority to send to them first because they need it.”

To try to keep up with demand, Lee said, three shifts of less than 40 workers are toiling around the clock, seven days a week. “So we are busy,” he said, of the only company in the U.S. that makes waterproof and chemical-resistant gloves. Last November, the Navajo Nation invested $19 million in the startup company.

The COVID-19 outbreak caused a nationwide shortage of personal protective equipment, or PPE, and some health care workers and first responders have been forced to reuse facemasks and gloves. “On the supply side, it’s been challenging,” Lee said. “First, we were shipping, then trucking. We all have our stresses.

Since the outbreak, according to the Society of Healthcare Organizations Procurement Professionals, costs for PPE have skyrocketed. The N95 masks that usually sold for 11 cents before the pandemic have risen to $6.75 a mask, a 6,136% increase. Nitrile gloves, meanwhile, doubled in price from five cents a pair to 10 cents. 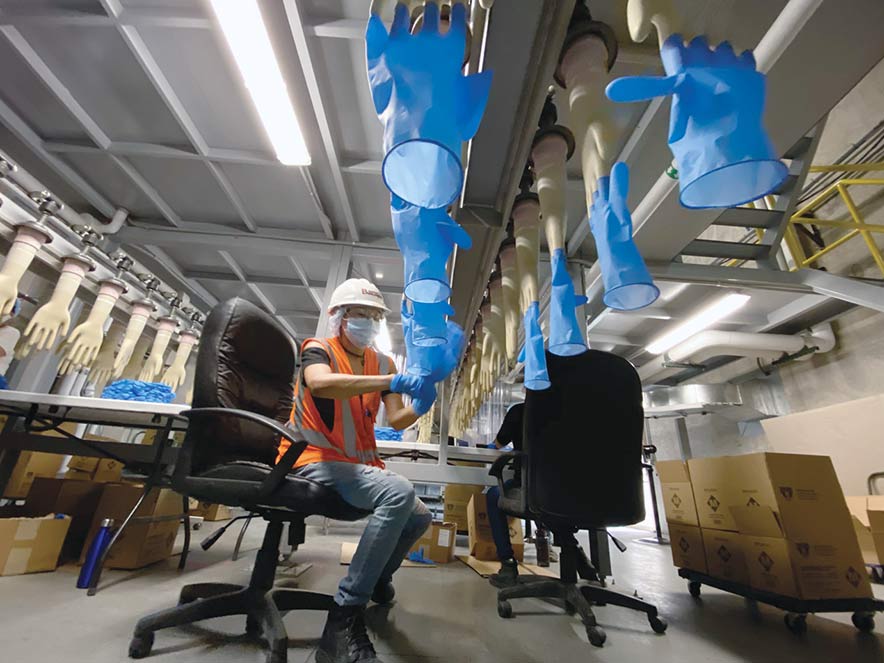 Other PPE, like gowns, went from 25 cents to $5. The price of face shields went from 50 cents to $4.50. Lee said Rhino Health, a part of South Korea-based Jungwoo Rubber & Plastic, continues to operate in the negative despite the demand for gloves. He added they hope to begin expanding the company by adding 110,000 extra square feet, so that it could eventually employ 350 people and start making 1.3 billion pairs of gloves a year, compared to 60 million gloves a year now.

“It’s kind of cool,” he said. “Every single glove is made by Navajo people and is being shipped out to the Navajo people. It’s a proud moment.” To prevent the coronavirus from impacting the company, before every shift begins, employees dedicate 30 minutes to cleaning work areas, restrooms, and the dining area to ensure the building stays virus-free.

“It takes an enormous of energy and many moving parts in order to make the success for the next expansion,” Lee said. “We don’t have enough ‘Made in USA’ gloves. My goal is to expand to six lines, as quickly as we can, so we can make different sizes, from small to extra-large as quick as possible. So, time is of the essence.”