Navajo Nation has had its own data center for years, but few people know 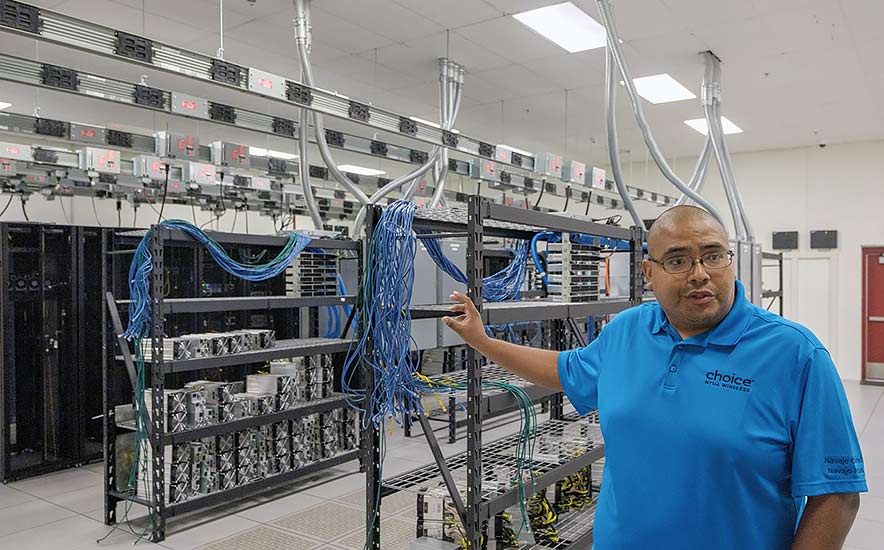 Special to the Times | Ray Landry
Christopher Curley, Navajo Tribal Utility Authority Choice Wireless Solution architect, talks about the purpose of the data center and options for customers on Oct. 11.

Everybody talks about storing data in “the cloud.” But hardly anybody really knows what that means, said Daun Johnson, supervisor at Navajo Tribal Utility Authority’s not-so-new data center in Shiprock.

“Most people hear the word ‘cloud’ and they think of a white, fluffy thing in the sky,” Johnson said. The “cloud” is actually a network of “data centers” — rooms full of wires, whirring fans and buzzing electronics. “You can think of it as a computer hotel,” Johnson said. “Any time you have a bunch of computers that need to be on all the time, communicating with the internet, you need a data center.”

Unfortunately, said Christopher Curley, solution architect for Choice NTUA Wireless, a lot of businesses need a data center and don’t know it. And even fewer know there’s one right here on the Navajo Nation, and it’s been here since 2012. So far, the majority of the data center’s customers, besides NTUA’s own wireless company and service network, are departments of the Navajo Nation government. But the Navajo cloud is nowhere near capacity, and is trying to reach out to private businesses to show them what it offers.

Actually, rather than a hotel, you can think of a data center as a gated community for computers. They need to have a high level of security, because most companies store a lot of customer and proprietary information in the cloud. They need to have redundant power sources in case one fails. And they need to be kept at a constant temperature, between 60 and 80 degrees and at 40 to 60 percent humidity. Think of the data center as Sun City for computers, except these computers are far from retired — they’re working 24/7.

Data centers range from Tier 1 — “Basically just a computer room without redundant power or cooling,” explained Johnson — to Tier 4, with armed security guards and 100 percent redundancy, or backup power. NTUA’s is a Tier 3, so it’s just about as good as you can get. Through broadband cable and microwave towers networking with other data centers, this data center can host data from all over the world, Curley explained.

The fact that it’s on the Navajo Nation makes it attractive to, for instance, tribal casinos, which by law must have their operations on sovereign land. Depending on how much equipment a company needs to store, the price is either $750 or $1,500 a month. A typical network might include five routers and a VPN — a virtual private network, which you can think of as “a tunnel in the internet” for private communications, Curley explained. If that seems pricy, Curley argues that it adds a lot of value to a company’s product if customers know their data is secure, protected, and not in danger of being lost in the next electrical storm.

How does a data center achieve “redundancy” in its power supply? In the case of NTUA’s Shiprock facility, it’s connected to both the Shiprock and Gadii’ahi substations. “If something happens to one station, it automatically switches to the other,” Johnson explained. “If we lose both substations, it switches to a backup generator.”

The data center actually has four 750-kilowatt generators, which is one more than it needs to operate. Data can be uploaded or downloaded from the data center at a speed of 10 gigabits per second, which is pretty darned good, but NTUA is currently working to improve that. Between the data center and NTUA’s network operations center, which shares a building with it, the company provides 30 well-paying jobs in Shiprock that only require an associate’s degree in informational technology, said Curley and NOC supervisor Morgan Wilson. Only two of those jobs are currently held by non-Natives. There is room to rise through the ranks as well, as the company promotes from within whenever possible.

On the day the Times visited, network operations technician Jeb Gould was manning the phone at the NOC and trouble-shooting NTUA’s communications network. Gould says he likes his job, even though it involves revolving shifts.

“Every day’s different, every day’s a new challenge,” he said. “It’s kind of like you’re a detective, trying to figure out what the problem is. “And in a broader sense, I’m part of a team that helps the Navajo Nation by keeping Navajo people connected to the outside world,” he said.

While the data center has plenty of capacity, NTUAW — a company 51 percent owned by NTUA and 49 percent by Commnet — continues to lay cable and put up microwave towers, improving communications access and download speed across the reservation, according to Velena R. Tsosie, deputy general manager of NTUA Choice Wireless. The company currently offers pretty good to excellent coverage in most of the reservation, but Eastern Agency, with its patchwork of land ownership, continues to be a challenge for the company’s right-of-way department.

The recent allocation of Citizens Broadband Radio Service bandwidth to NTUAW will improve coverage in Shiprock, Tse Daa Kaan, and Waterflow in New Mexico, as well as Tsaile, Kaibeto and Kayenta, Arizona. Technologically, the Nation is already equipped to handle AMBER and other alerts, as well as the elusive e-911 system, where a caller’s address will automatically be provided to a 911 dispatcher.

“We’re just waiting on the Rural Addressing Department to give everyone addresses,” explained Tsosie.

While there are other broadband providers on the Navajo Nation, Tsosie believes it’s crucial for the Navajo Nation to have its own communications enterprise. A case in point was in 2018, when the clerk in San Juan County, Utah, was disqualifying Navajo voters who didn’t have street addresses ahead of the county commission election.

“We got a call from (Human Rights Commission Director) Leonard Gorman saying ‘We need your help,’” Tsosie recalled. The commission was setting up sites throughout the county to re-register Navajo voters based on their GPS coordinates. The only problem was that to do that, they needed internet access, and none of the 12 sites had that. “With one day’s notice, we set up broadband access free of charge at all 12 locations,” Tsosie said.

After the election, she remembers picking up the Navajo Times and seeing an article about the swearing-in of San Juan County’s first majority-Navajo county commission. “I’m not saying we were entirely responsible for that,” she said, “but indirectly, we made it happen. We were very proud.”