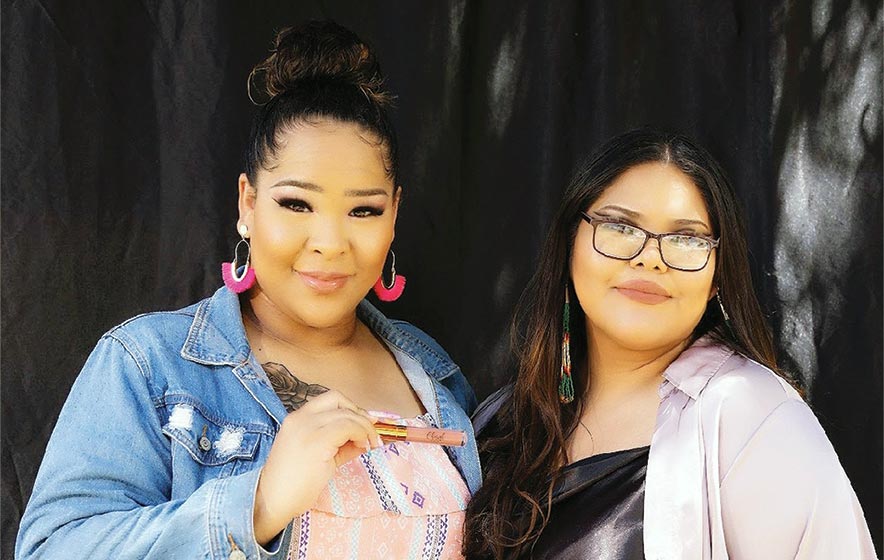 Yazzie-Hart wanted to do something nice for her mom and decided to make a gift basket full of skincare and other cosmetics.

Her boss encouraged her to continue to make the baskets so people could buy them as a bundle.

She began selling them on Facebook to her friends and family. Realizing how interested people were in the bundles, her mother gave her the idea to begin using her own products.

Soon enough, she started researching how to manufacture her own skincare products.

“I did all of research, I got my LLC, I did all of that,” Yazzie-Hart said. “That’s when I decided to bring out my own brand of skincare products.”

Little did she know that her skincare products were only the beginning of a blossoming business that would lead to online success and a storefront located in Phoenix.

Yazzie-Hart currently resides in Phoenix. She is originally from Chilchinbeto but grew up in Kayenta.

As a child growing up on the Navajo Nation, Yazzie-Hart said she was bullied for being half-Black.

“For me, I kind of had a little bit of resentment toward my Navajo side because of it,” she said.

Due to the bullying by her former peers, she said she was to the point of trying to suppress her Navajo side.

As Yazzie-Hart got older, she learned to embrace being Navajo because it is who she is and where she is from.

“I just wanted to create products that just represented me with both my Navajo and my Black side,” Yazzie-Hart said.

One of the main foundations for her business was to make sure that she represents her Navajo side.

This caused her to push forward in her business and to create eyeshadow palettes where the colors revolve around the Navajo Nation, specifically the Nation’s seal and varying schools across Navajo.

“That’s why you see the Navajo Nation palette,” she said. “That’s why you see all these different schools because that is really what inspires me to do what I’m doing and also to create the specific products that are featured with my brand.”

Within her eyeshadow palettes, she has featured schools like Shonto, Thoreau, Many Farms, Gallup and Ganada along with many more.

These palettes quickly helped her business gain traction after she posted them on TikTok.

“I had posted that original video with the Navajo Nation palette and things like that and that’s when it got a bunch of shares and a bunch of likes,” Yazzie-Hart said.

Through this video, she was able to get in contact with other Navajo TikTok creators who had a fairly large following.

These creators began sharing her videos and products and she says her business, “went viral.”

With her TikTok account now having a total of 10.9K followers, she attributes TikTok to playing a part in helping her business.

“A lot of it (Cherish Skin’s success) really did have to do with TikTok,” she said. “Anytime I go live (on TikTok), we tend to sell out of a lot of our products.

“TikTok has been very beneficial to the growth and success of my business,” she said.

Since this success, Yazzie-Hart and her business have been invited to many events across the Navajo Nation.

Her most recent achievement was her team being the featured makeup artists for the Navajo Nation Fashion Show during the fair over the past week.

“It’s just exciting,” she said. “I’m really excited about that and being able to attend these events with my team of makeup artists.”

Yazzie-Hart plans to continue to garner support for her business so she can continue what she is doing while also making new leaps.

She hopes to make a missing and murdered palette in the future to help bring awareness to the epidemic and to donate a portion of the proceeds to families who have been impacted by it.

“I feel like it would be great representation for that movement,” Yazzie-Hart said.

Another major leap she hopes to accomplish is to open a storefront in Flagstaff since it is the halfway point from where she is currently located to where she grew up.

“That’s one thing I’m looking forward to for the future,” she said. “We do finally get enough support to actually open up a storefront in Flagstaff.”

However, Yazzie-Hart also hopes to benefit the Native community.

She hopes to form scholarships for young Native people who are aspiring makeup artists and estheticians. These scholarships would benefit students who would like to attend cosmetology or esthetician school.

“We’re just going to continue to keep doing that (supporting the community) and being out into the community as team,” Yazzie-Hart said.