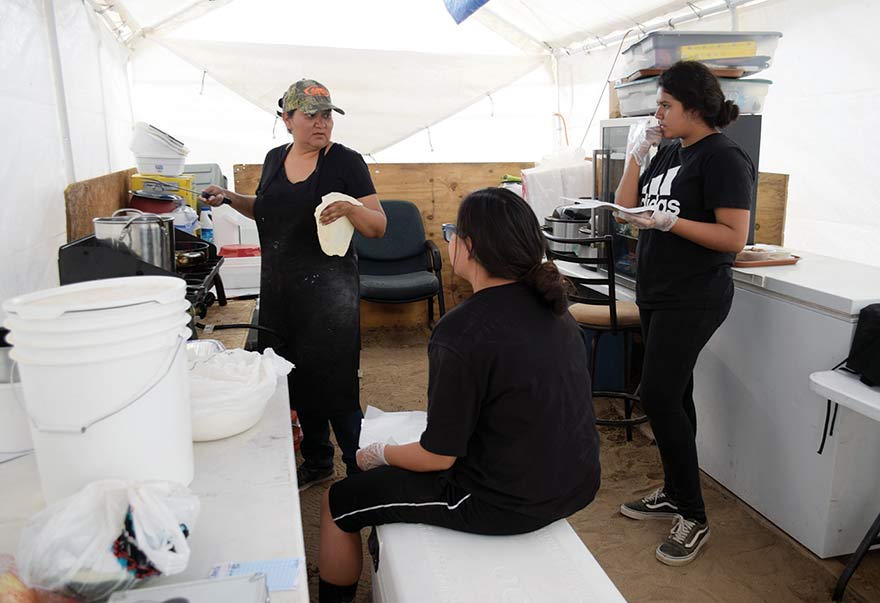 Navajo Times | Ravonelle Yazzie
As Berinda Simpson cook fry bread, Maniyah Simpson, back to camera, and her sister Zaira hold pieces of wax paper and foil in hand ready to serve fresh fry bread to their customers on Saturday at the Eastern Navajo Fair in Crownpoint.

Last week, the Simpson family from Chinle got up at 5 a.m. and drove two and a half hours to a place they’d never been to sell food they only sell during fair season. This is not how the parents, Berlinda and Quanah Simpson, make money to support the family. It wasn’t even to make extra money, though this was definitely a perk.

It was to teach their children a very important lesson. “I always tell my girls, ‘You better not be broke in the future. You know how to make fry bread,’” Berlinda said with a laugh. “You can just make a make-shift shack and start selling out of there.” For the past five years, the Simpson family has been selling Navajo food during fair season.

The first Navajo fair every year is the Eastern Navajo Fair which underwent a rebranding this year. In years prior it was called Diné Bi’ Eastern Fair. This was the family’s first time at the Eastern Fair and they weren’t sure if they would be coming back next year as food vendors were located clear across the fairgrounds and too far from the rodeo grounds.

The fair was also not well attended and was nearly empty most days. Anyway, it wasn’t the lack of people that bothered Berlinda. It was the placement of the food vendors because location is important.

This is just one drop in a sea of knowledge that Berlinda is trying to teach her children. Slowly but surely they are picking it up.