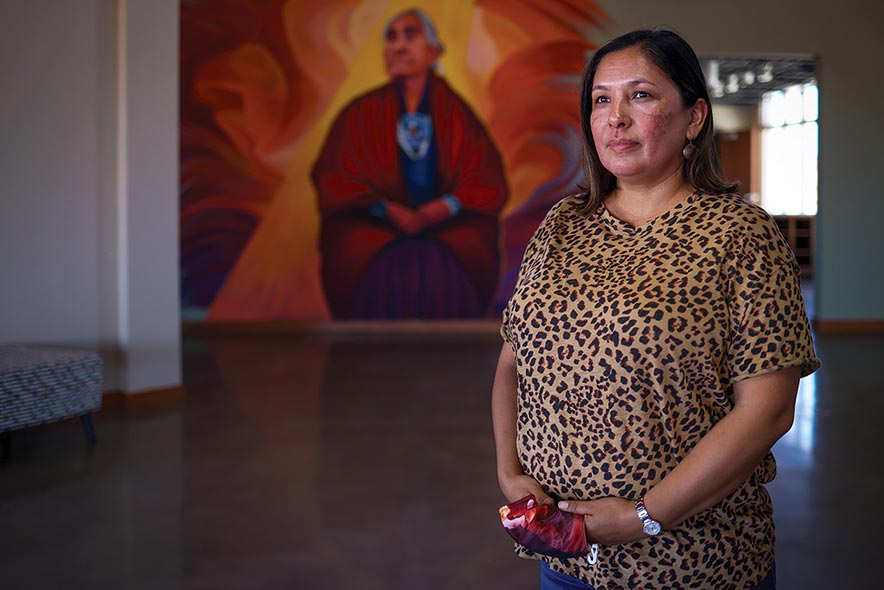 Walking into Dixie’s Lower Antelope Canyon Tours’ newly built expansion you are greeted with a colorful mural of the late Sally Young, the family matriarch.

The family keeps her memory alive by a foundation started in her name. Her granddaughter and CEO of the family-owned tour business, Leilah Young, said her grandmother was a giving person who would give her last dollar to someone who needed it more.

“A lot of the stuff I do in my life is in honor of her,” said Young emotionally. “When I do certain things in my life we say ‘Will this make my grandmother proud?’”

This giving nature is also one exemplified by Young and her mom Dixie Ellis, owner and namesake of the business. Their canyon tour business does so much more than offer tours; it gives back to their community and its employees.

But for over a year, Dixie’s Lower Antelope Canyon Tours has been shut down due to Navajo Nation regulations to stem the COVID-19 pandemic.

“I’m speaking out on behalf of our employees,” said Young. “I don’t know if the Nation is hearing our voices for the Western Agency. I don’t think they really understand how detrimental this is to our employees and their families.”

At peak tourist season in 2019, Young said they had about 120 employees. But with over a yearlong closure most of those employees have moved off the Navajo Nation to cities where they could find work.

Those who haven’t found employment elsewhere have been reaching out to Young and asking when they can get back to work. But this answer is one neither Young, Ellis, nor anyone else can answer because they themselves are asking the same question.

As the Navajo Nation continues to see low case numbers while in the “yellow” phase of transmission risk, and more people, now including teenagers, are getting vaccinated, Navajo Nation Parks and Recreation sites remain closed just when the usual flood of summer tourists should be hitting.

During his Tuesday virtual town hall President Jonathan Nez said he is in talks with his health advisors about reopening, adding that the Nation will likely see an increase in visitors over previous years since it’s been closed for over a year. Continuing the mask mandate and having visitors wear masks will be mandatory, he said.

But tour operators like Young say their patience is rapidly running out.

Young said all her employees are vaccinated after the company offered to drive employees to Tuba City Regional Health Care for their shots. They were under the impression that once everyone was vaccinated, they’d be given the green light to open.

“We are ready to open,” said Young. “Parks and Rec have asked us to create procedures to reopen. We’ve had ours since last year. We modified these procedural plans each time they added different information. 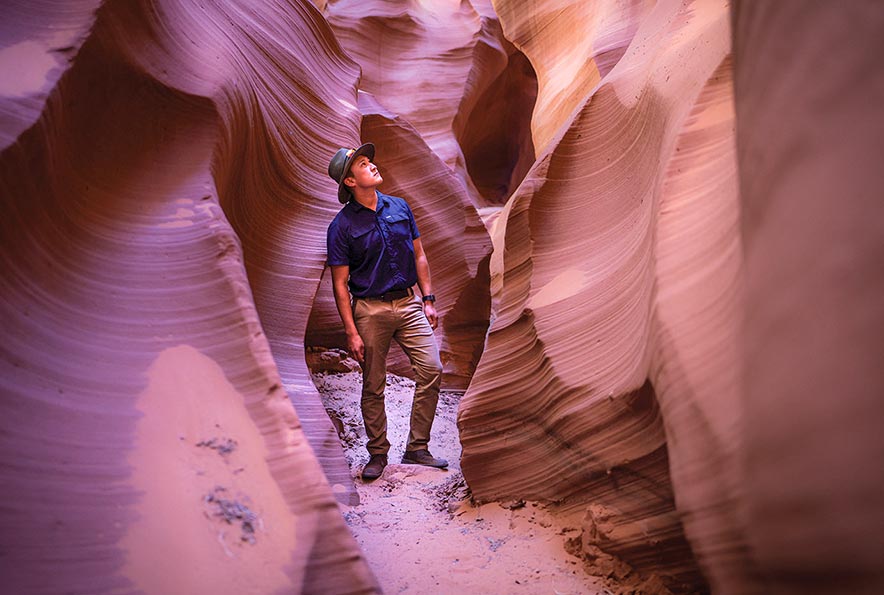 Continuing with her grandmother’s generosity, Young said their business has allowed them to give back to their employees and their community, but certainly being shut down it has impacted its altruism, not to mention making it difficult for employees to stay close to home and pay bills.

“We value our employees’ lives, our visitors’ lives,” said Young. “We are not trying to be selfish saying let us open. We need to go back to work.

“I know same employees that have had their vehicles repossessed, had to move out of their apartments because it’s expensive to live in Page,” she said. “Regardless of what the federal government said that they couldn’t get evicted, that wasn’t true. With the Nation they weren’t as helpful as they could’ve been.”

Since 2014, Dixie’s has employed 560 Navajo employees and given $358,000 in financial aid and scholarships to employees’ families.

They have also sponsored 46 events for community youth and families, including aid to Navajo law enforcement, fire/EMS, senior centers and Navajo children’s services.

During the pandemic closure, they have aided surrounding communities by providing financial aid in the form of rental assistance and utility payments.

They have also procured and disbursed food, firewood, water, and sanitary products to over 250 families in remote homesites, as well as continuing to help employees provide for their families by keeping them on payroll for a total of $780,000 through the entire year of 2020.

“There is no shortage of things that need to be done in the area,” said DeRon Jay Lister, operations liaison. “I think Dixie’s Lower Antelope Canyon Tours does a great job at stepping up and making a real effort and difference.”

Page Mayor Bill Diak said the town was fortunate to experience low COVID-19 case numbers, and said with a population that is about 70 percent Native American, he’s concerned about the closures because “they’re not working” for the Navajo people. Those who are not waiting for the parks to reopen are leaving their homes and families, which incurs the added expense of running a dual household.

“They’re struggling,” said Diak. “What we are finding is they have been in anticipation of the park reopening. They hire several hundred people and they’ve been holding out trying to stay for the parks opening and now they’re leaving. That’s tough because it splits the family up.”

At Dixie’s, the only staff that has continued working through the pandemic is Christopher Chee, general manager, and Joshua Benally, marketing. And Dixie’s is just one of about 13 tour businesses operating in the area.

“It extends through Antelope Canyon, it goes up closer to the Colorado River,” explained Lister. “It even goes up to Kaibeto where there are slot canyons also. These tour companies are running a mixture of mostly land-based tours, some helicopter tours, equestrian tours, and hopefully one day boat tours as well.”

Another issue that this business has encountered is trespassing and vandalism. Young and Chee agree that if anyone wants to get into the canyons, they will and right now people are getting in from Lake Powell.

Chee said they have caught people who have found their way into the closed canyons, but not much can be done in the way of punishment. Young said they used to patrol the canyons with a security detail but stopped because they were concerned an employee could get hurt.

Obviously protecting Navajo tribal parks should be something done by the Navajo Nation, not a private company, he said.

“Being one of the lucky ones that’s still employed here, it’s very difficult being the steward of the land,” said Chee, who’s also a tour guide. “We do get people that sneak into the canyon.

“We can’t have security guards here 24/7,” he said. “If someone gets hurt inside the canyon, we don’t have cell service … We don’t want anyone losing their life trying to see the bottom of the canyon. Another problem is graffiti.”

Utah is seeing its public lands defiled, said Lister, including a recent incident where someone painted white supremacist graffiti over 1,000-year-old petroglyphs.

Human waste has even been left behind in national parks and that is something they don’t want happening at Antelope, he said.

“As far as trespassing, we get about five or six vehicles that stop at the gate,” said Chee. “We have seen people jump over the fence where we have to take our UTV and turn them around. It’s a daily occurrence.

“Navajo Rangers, they have the real authority to charge people,” he said, “but with only two you can’t really do anything.”

Ellis remembers herding sheep when she was younger along the canyon before there was a tour business. She said her mom Sally would warn her and her sister not to get close or play by the canyon or she’d fall in.

After five years, and right before the pandemic hit, her tour business finally got through the Navajo Nation’s red tape for a business-site lease.

Just recently they finished building the expansion that visitors and tourists haven’t seen yet, and where her mom’s mural will proudly greet people once business is in operation.

When they first started the tour business, they were using only a canopy and sometimes that would leave tourists giving not-so-nice feedback online.

The longer the business is closed, she says, the more hardship is placed on her family, her employees and the community.

“I try to tell my kids how my mom talked to me and how she raised us,” said Ellis. “To be helpful. We try our best to be the best we can.

“For our employees, I know COVID put us down but even though we were closed we still paid our employees (right up to the end of the year),” she said. “The people in town ask us when we are opening. They say: ‘You are the one who gives us business.’ Every time they ask me, it hurts me. I wish we could reopen. We are ready.”

Delegate Paul Begay is sponsoring a resolution to reopen tribal parks. The legislation needs to be voted on by the Naabik’iyati’ Committee, then Navajo Nation Council, and if passed it goes to President Jonathan Nez for his consideration.