‘Giving the Nation a reason to smile’: Diné to appear on ‘American Ninja Warrior’ Monday 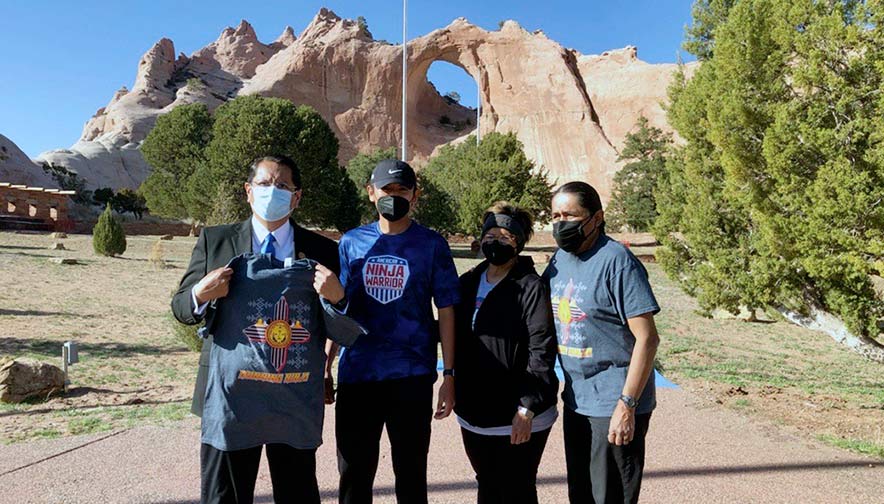 Submitted
American Ninja Warrior participant Patterson Yazzie III (second left) is pictured here with Navajo Nation President Jonathan Nez (left) and his parents Joanne and Patterson Yazzie II. Yazzie, 20, will be the first Diné to compete on the show when the new season premiers on Monday, May 31 on NBC.

The new season for “American Ninja Warrior” premiers on Monday, May 31, on NBC. Among the new contestants for the show will be Patterson Yazzie III, the first Diné to compete in the show.

“It means a lot to me. It’s a big opportunity for me and my family to really showcase what I can do and how I go about it. No matter where you come from, you can always do what you want as long as you have a solid foundation. Even if you don’t have one, go and build one yourself, like any good home or a hogan I guess,” Yazzie said with a laugh.

American Ninja Warrior runs athletic contestants through a gantlet of obstacle courses where they have to run along vertical surfaces, swing on monkey bars and run across rolling surfaces, all without falling into a pool of water below. The objective is to reach the end of the course and hit a buzzer. If the contestant falls into the water, they are eliminated from the competition.

The show will continue until the remaining contenders reach the finals in Las Vegas where the grand prize winner receives $1 million.

This will be the show’s 13th season. Its last season had garnered over 35 million viewers from around the world. Up until last year, Yazzie was one such viewer.

Yazzie was always fascinated by the show, especially the contenders who were top grade athletes. He enjoyed hearing who these people were as they told their individual stories.

One contender who inspired him was Nick Hanson, the “Eskimo Ninja.” Yazzie found it amazing how the athlete from Alaska had to build himself up using only what he had available. Yazzie would joke that their training was quite similar as he didn’t have much to train with either in his hometown of Rock Springs, New Mexico.

Yazzie grew up there all his life and never did he think he would appear on the TV show that he and his dad loved. For one thing, when he was in high school, he weighed over 200 pounds. Not long after finishing high school, Yazzie decided to change that.

He started weight-lifting and became an avid runner to the point where he now runs marathons. He is currently taking college classes with the University of New Mexico Gallup branch and will be graduating soon with his associate’s in criminal justice.

His parents are proud that not only is he able to stay healthy, but he is also continuing his education. It is a balance that Yazzie II believes will be helpful in the coming competition.

“Just balance with your life and work and fitness, just balance it and make a plan and achieve it,” Yazzie II advised. “It’s possible with education and fitness. It can be done (with) lots of support from family. That’s where his foundation is and where he gets his support from.”

Since he is in college Yazzie didn’t have any intention of trying out for American Ninja Warrior, but when the age restriction was lowered, he decided to try it.

Yazzie II remembered when he talked to his son about it and why he wanted to compete.

“He said ‘You know, once any Native American from across the United States, if we watched them on television on the national level, we become strong because once we see that we want to become strong and believe in ourselves, and we do it and we get the opportunity,’” Yazzie II remembered.

“It’s going to open doors for a lot of Native American men and they can be young or even older Native Americans because that American Ninja Warrior is made for every age, not just a certain young group. Any race and any age,” Yazzie II said.

Yazzie III didn’t make the cut last year when he applied at the age of 19, but he kept training. When the COVID-19 pandemic hit and his family went into lockdown, Yazzie used this time to focus on training, building his muscles and endurance.

He also found a ninja gym in Albuquerque. He would make four-hour trips there and back to learn the finer points of obstacle running.

Yazzie takes pride in his heritage and where he comes from. He noted how terribly the COVID virus hit the Navajo Nation, but he took heart seeing Diné come together and help each other through the hardships.

He also takes inspiration from his father, who is also a runner and former rodeo contestant.

“Another inspiration in everything I have to do is my old man, my dad,” Yazzie III said. “He would run with me and we would get ready for each of my races every single day that I wanted to run, whether it was in high school or running these local races.”

Eventually the time came for Yazzie III to try to enter again. He answered the required questions and sent in a video of his performance while also explaining why he should be picked for this year’s competition. After a couple of weeks, he got the phone call telling him he was chosen at the age of 20.

“It’s a big deal for me, for them to give someone like me a chance that’s been told ‘no’ most of his life, someone who was looked down on and bullied, for them to tell someone like me ‘yes’ and giving me a shot, it means a lot for me to head up there and compete,” Yazzie III said.

“I competed in many different races but this is another ball game,” Yazzie III said, “There are pre-race jitters and this is probably something I have. I’m nervous but I’m looking forward to it, looking forward to compete, prove to everybody that you can do it no matter who you are, where you are from, what was in your past.”

Before he left for Seattle for the first leg of his journey, Yazzie met President Jonathan Nez (whom he met previously when they ran in the same race) and Miss Navajo Nation Shaandiin Parrish. They wished him luck and presented him with a Navajo Nation flag that Yazzie plans to display at the show.

“I’m working my way to the top and I’m just doing something I want to do to be successful, I’m looking forward to hitting that buzzer this weekend and if I fall, I fall. You have to accept the taste of failure before you become successful,” Yazzie III said.

Yazzie hopes his appearance on television will inspire Native kids to chase their dreams, to not be afraid and to ignore taunts that are thrown their way. Yazzie was bullied for being an overweight kid in school and now he is about to compete alongside the best athletes in the country on nationwide television.

“It’s awesome,” Yazzie II said. “It’s really nice that he’s going to compete because it takes a lot of hard work and you never believe that anybody like a Native American, a Diné person, can get the opportunity to do that. I’m just real proud of him.”

Win or lose, Yazzie III just hopes that other natives will see him and be inspired to follow their dreams.

“Thank you to everyone who supported me, reached out to me,” he said. My family of course is a big inspiration to why I’m doing this and I’m just looking forward to giving the Navajo Nation a reason to smile, to give everybody a positive outlook on everything. No matter what is thrown your way, go out there and do it, finish it, fight for it, fight for your dreams and be the person you want to be regardless of what others say.”