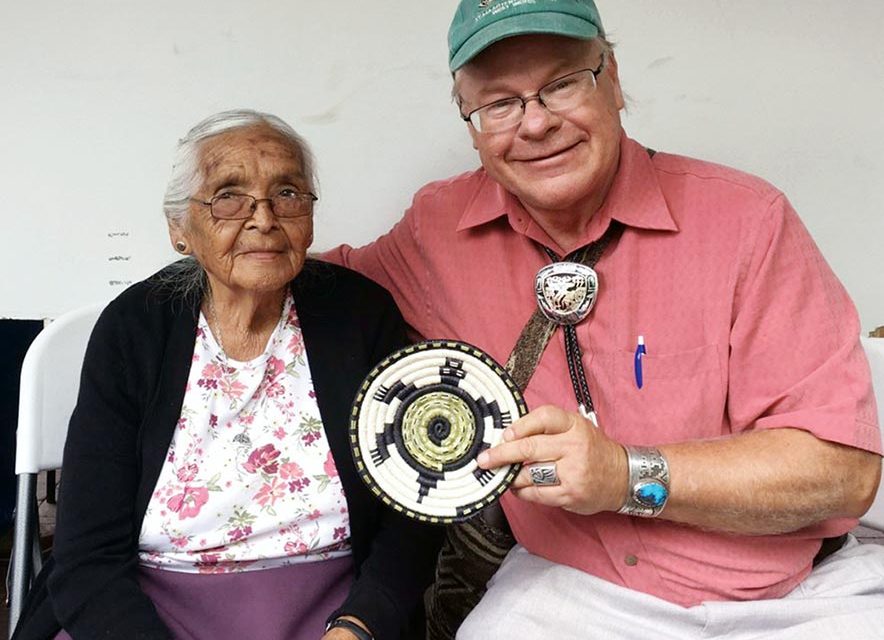 Courtesy photo | Angie Schaaf Award-winning Hopi silversmith and basket weaver Griselda Saufkie was one of the elders who inspired Gregory Schaaf to create the Free Indian Market in 2018 with the motto “Honor the Elders and Respect the Artists.”

In its third year, the “Free Indian Market,” envisioned by traditional Native American elders, is designed to be a safety net for artists who, for any reason, don’t get into the SWAIA Santa Fe Indian Market show, says it’s founder Gregory Schaaf, a long-time Native American art scholar, historian, author and collector.

This Aug. 21 and 22, the Free Indian Market will feature over 500 award-winning artists at the Scottish Rite Temple and the adjacent Federal Park in downtown Santa Fe. The event is open to the public and free for the artists, who do not have to pay a booth fee to participate.

‘A family reunion: Support from artists, others enliven free market

“I think the Free Indian Market is the way to go this year,” said Diné silversmith/jeweler Gene Billie. “It’s going to really help out a lot of Native families in a lot of ways, including financially.”

As a free show, it’s a “win-win” for everyone, says Billie.

“I think it’s a good deal and I support it one hundred percent,” he said. “It’s a breath of fresh air for a lot of artists that depended on the other shows.”

The Free Indian Market emerged in 2018 after Santa Fe Indian Market discontinued its tenure policy for hundreds of Native American artists, some of whom had participated in the market for decades.

“A lot of Indian Market artists, especially seniors, were not invited back,” said award-winning Kewa potter Robert Tenorio, one of the Free Indian Market founders. “I guess they were making room for the newer contemporary artist.”

Tenorio says he stays with the traditional designs, methods and natural materials that are part of the way of life at Santo Domingo Pueblo.

“It’s the time, effort and workmanship that counts,” he said.

“Over 300 Native American artists, mostly elders, mostly Pueblo and Navajo, all of a sudden found that they were no longer invited to Indian Market,” said Schaaf. “When they discovered that my phone began to ring off the hook. They were very upset and they asked me to go out and fix it.”

Many of those elders are descendants of the founders of the original Santa Fe Indian Market almost one hundred years ago, says Schaaf, who relayed a story of one “Grandma” who told him, “We have to be like the Frog Clan and hop right on over and create a new show.”

Schaaf said he was raised by his parents to always have respect for elders.

“It’s very important because these elders have insights into the past, present, and future,” he said. “To me they are like living treasures and they deserve to be treated with kindness and respect.”

The elders advised Schaaf that they wanted to go back to the way it was in the “good old days” when booth spaces were free of charge and they were all welcomed.

Soon thereafter, the “Free Indian Market” was born on a “leap of faith,” said Schaaf, and the New Mexico Foundation stepped up to become the fiscal umbrella for the nonprofit.

“They said, ‘Bilagáanas created those ribbons to put us in competition with one another and we decided we wanted to go back to the old tradition of working in cooperation and harmony with each other,’” Schaaf said.

They also recommended that the show be 90% Southwest with participating artists from outside of the area treated as honored guests, he said.

Since moving to Santa Fe 25 years ago, Schaaf and his wife Angie have published nine books of over 17,000 Native American artist biographies.

“After I retired from being a university professor of Native American studies, I moved to Santa Fe at the urging of renowned Apache sculptor Allan Houser and began working on this encyclopedia of Native American artists,” he said. “He challenged me to climb down out of the ivory tower and roll up my sleeves and go to work.”

Applicants to the Free Indian Market do not need to use a computer to apply or be considered, said Schaaf, who curates the market like a museum exhibition. They just need to give him a call.
“Instead of being a blind-juried show, we are an invitational show,” said Schaaf. “We research the history and background of each artist.”

That includes how artists learned their craft, who their teachers were, and what techniques they use as well as a personal interview.

Diné master silversmith Ernie Lister, who has known Schaaf since the early 2000s said his intent is to help Native people and put the spotlight on “real, authentic” Native American art and tradition, which is why he’s going with Free Indian Market this year.

“The focus of this market is the Native artist, not the name over the doorway, but the artist and his family and who they are,” said Lister.

“A lot of time these huge markets become myopic or get caught up in the Zeitgeist where everything becomes a victim to marketing,” said Lister. “As a result of that, some very valuable, traditional artforms are disappearing.”

Without a traditional Native American lineage, Lister says Southwest jewelry would be nothing more than a souvenir without the heart and soul of Native culture.

“It is so invaluably rich, that culture,” he said.

The Free Indian Market has spotlighted that necessity of preserving that element, he said.

“Greg gets it,” said Lister. “Because of that he’s earned my respect.”

In its first year, the Free Indian Market had 68 participants and in 2019, 305 artists partook, earning over $1 million in total sales.

“The great thing about the way they set it up and we designed it was that my wife (Angie Schaaf) and I and our circle of workers work absolutely free of charge – we’re all volunteers,” said Schaaf. “The Native artists go home with all the money. We don’t take a percentage, we don’t charge any fees.”

This year, Schaaf secured an additional two acres of booth space at the Santa Fe Federal Park to augment the exhibition’s capacity, which was a major feat that anchors Free Indian Market squarely in the heart of Santa Fe.

While the Free Indian Market presently has about 500 artists participating in the 2021 in-person market, that number could continue to grow as COVID-19 capacity restrictions continue to ease.
“This year, we are swamped with artist requests,” said Schaaf. “Fortunately, we began planning long ago…”

Diné painter and writer Ronald Chee said after a year of financial losses for Native artists due to COVID-19, the idea of a free market is especially relevant.

“Gregory’s purpose is to give the Native artists the opportunity to continue to sell their art at no cost,” he said.

Chee said when Santa Fe Indian Market decided to restrict a lot of their artists from coming to the in-person market this year because of COVID-19, they cut the numbers of booths from almost a thousand to five hundred.

“That freed up a lot of artists who were looking for an outlet,” he said. “They’ve been calling Gregory left and right, but I think he enjoys that. I think the guy should get a humanitarian award.”

A long time Santa Fe Indian Market artist himself, Chee said he’s honored to choose Free Indian Market this year and believes giving the opportunity for artists to share their ancestry and heritage with customers in person is vital.

“Gregory doesn’t just want to give artists a free outlet,” said Chee. “He wants to educate the public about Native history, culture and tradition.”

Schaaf has also proven that you can successfully operate a free market with volunteers and donations, he said.

SWAIA ‘completely on board’

When asked if he supports the Free Indian Market, Santa Fe Indian Market Board Chairman Tom Teegarden told Navajo Times that SWAIA’s mission has always been about promoting Native artists and connecting them with patrons, collectors, and people “who adore and whose lives are enriched by the art.”

Teegarden said unfortunately there are now far more “incredibly worthy” Native artists than what Santa Fe Indian Market can possibly accommodate and all of the efforts by other venues like hotels, churches, and the Scottish Rite Temple provide more opportunities for artists to share their art and make a living.

“These other markets that do that – we are completely on board because those things are consistent with what SWAIA’s mission is all about,” said Teegarden.

He also acknowledged the unprecedented challenges posed this year by the continuously evolving COVID-19 capacity restrictions in planning a large event and keeping everyone safe.

World renowned Diné painter Bahe Whitethorne, who says he benefited from being a part of Santa Fe Indian Market for more than 40 years, also said it used to be more like what the Free Indian Market is now.

“It was more of a community,” said Whitethorne.

About 10 years ago Whitethorne left Santa Fe Indian Market because he wasn’t sure where the market was going and it became “complicated” to do.

“I felt years ago something was happening,” said Whitethorne. “They were moving everyone around.”

Then he went back a couple of years ago, and did the virtual Indian Market in 2020, but was put on the waitlist for a booth this year.

Whitethorne said he has seen Schaaf help many artists who have been juried out of Indian Market.

“Sometimes you hate to see and hear that,” he said. “The sadness about when they don’t get accepted.”

He said he’s grateful for the opportunity to participate in the Free Indian Market this year and that there is a safety net for Native artists.

“Greg has always honored me,” he said. “It’s a good thing that he’s done.”