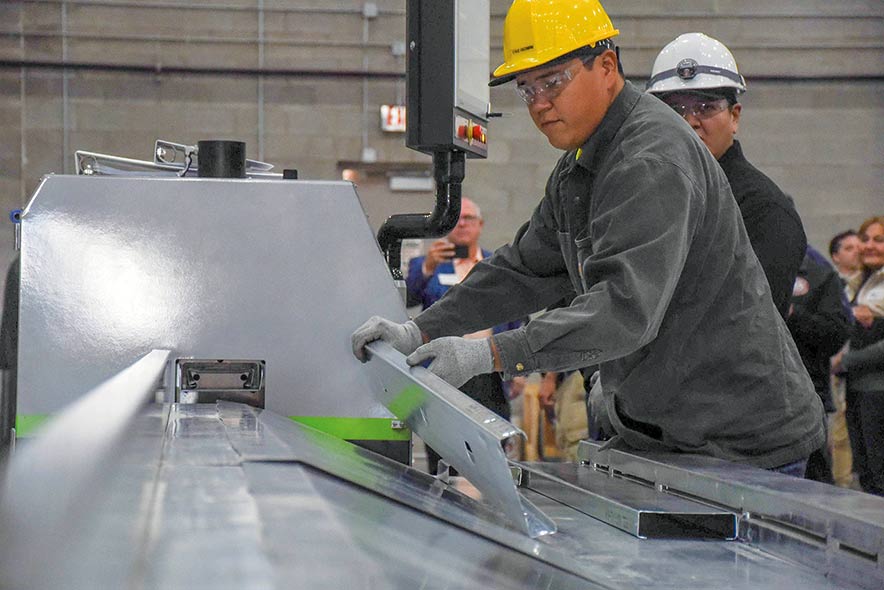 Navajo Times | Krista Allen
A pair of Diné workers make gauge steel for a ZenniHome structure inside the company’s factory at the decommissioned Navajo Generating site in LeChee, Ariz. Dec. 9.

That’s what co-founder of ZenniHome and entrepreneur Bob Worsley said.

The former Arizona legislator and SkyMall founder presented the emergence of ZenniHome, which builds affordable, sustainable manufactured homes inside the warehouse, one of the Navajo Nation’s retained assets, at the decommissioned NGS site.

ZenniHome announced Dec. 15 of last year its partnership with the tribe and a finalization of an emergency operating agreement so the manufacturer would begin the business.

“This is a resurrection of coming back to Navajo Generating Station and going back to work to build something else,” said Worsley, during its first-anniversary celebration at the site last Friday.

“We’re repurposing the old Navajo Generating site and all assets,” said Worsley. “We are paying tax revenues to the Navajo Nation, and someday, we’d like Navajo Housing (Authority) to consider us because the homes are built by Navajos. So, they should be lived in by Navajos.” 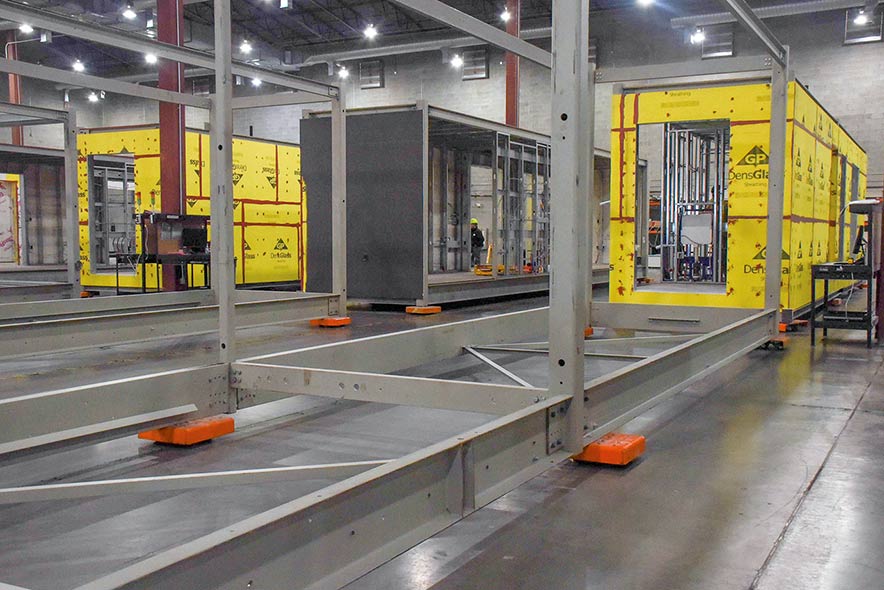 Worsley said ZenniHome chose LeChee as its home after manufacturing in Quanzhou, China, where it operated until the COVID-19 pandemic. He and his wife, Kristi, and community designer Stephen D. James formed ZenniHome LLC in November 2019.

“We have units there being built, and guess what? Covid happened, and ships couldn’t get here from China,” Worsley explained.

He said when the global supply chain reshaped his plans for his startup, he started looking for a place in the U.S. and chose the Lake Powell area.

“You guys know the story of what happened here,” Worsley said. “Billions of dollars of infrastructure that most of the guys here (with ZenniHome) used to work there.

“And most of our guys made sure it was operating well for the five utilities that (operated) the facility,” he said.

Worsley said he and his ZenniHome team are excited because LeChee is a “very” strategic point of distribution. After all, Phoenix, Las Vegas, Nevada, Salt Lake City, and the entire Wasatch Front are close by.

“It’s relatively close to Albuquerque and Denver, and we can hit the West Coast with one truck day,” he said.

ZenniHome employs 65 people, 55 of which are Diné and seven are in management positions. The current annual payroll is $4 million, and Worsley said that number will double in 2023, meaning the manufacturer will employ over 100 people.

Worsley explained that the high-tech ZenniHome living space in each room could convert from a sleeping area to an office or dining, reducing the overall environmental footprint.

“These things are very interesting,” Worsley said. “Twin beds for your kids in one room. A nice big bed in another room. It can turn into a sofa and turn into an office. And we’re operating on a Starlink system just like the Ukrainians.

“We can do that on any home,” he added. “Put solar, batteries, and inverters on every home. We can do atmospheric harvesting on every home, and you can live comfortably anywhere on the Navajo Nation without any infrastructure.”

ZenniHome was formed to bring viable solutions to the housing industry shortage in the U.S., according to its website. It specializes in transformative architecture and robotic furnishings that allow customers to get more living out of every square inch.

A ZenniHome is easily transported and stackable in multi-family configurations. According to Worsley, its flagship patented design units – Denizen and Citizen – are in a league of their own.

“We are all about steel,” he said. “Steel is sustainable, and you can recycle it.

“This facility (NGS) took out enough scrap steel to build 6,500 Zenni homes. And we’re buying steel that was recycled from this facility.

“Think about that: you take down a coal plant, and you build 6,500 homes on the Navajo Nation from the steel that was in this facility,” he said.

Worsley struck a deal with the Nation after the power plant left a massive hole in the region’s economy.

Worsley said DED gave ZenniHome the keys to the warehouse the day before.

“You know what happens when you can buy a home?” Worsley asked. “It means you have a job, stability––it means you can apply for credit and get a mortgage.

“We want that for everyone that currently doesn’t have a home––to be able to buy one.

“You can rest assured that if you devote time and attention to the highest advantage of others, the universe will support you always in the nick of time,” he added. “This is Navajo belief. If we live lightly on the land, it will be there for generations.”

LeChee Chapter President Joann Yazzie-Pioche said she’s thankful to see many of the Diné from the area working at ZenniHome.

“When NGS went down, we lost a lot of jobs,” Yazzie-Pioche said. “It’s good that (ZenniHome) has come to our community. We’d like to see more (businesses), and we’re trying to work on that with the county.”

She said it was sad to see the Three Sisters – NGS’s three units – go down Dec. 18, 2020, because many Diné women and men, including her father, worked there for years.

She said that she remembers when the site was covered with native plants where she herded sheep near her family’s winter grazing area.

“They’re sustainable––definitely,” Yazzie-Pioche said of the Zenni homes, “which is what we need, with everything going on in the world with climate change.”

Two types of Zenni homes are available and start from $75,000.