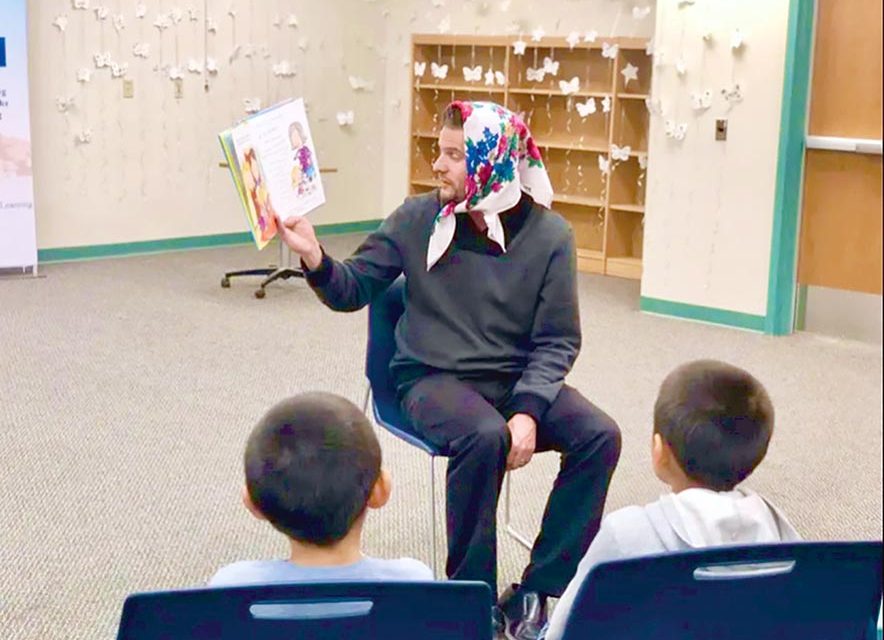 I used to tell people that Andrew, or as many would call him, Mr. Lawrence, coach, shiyáázh, or just plain Lawrence, did not come to Fort Defiance for me, and he did not stay for me. 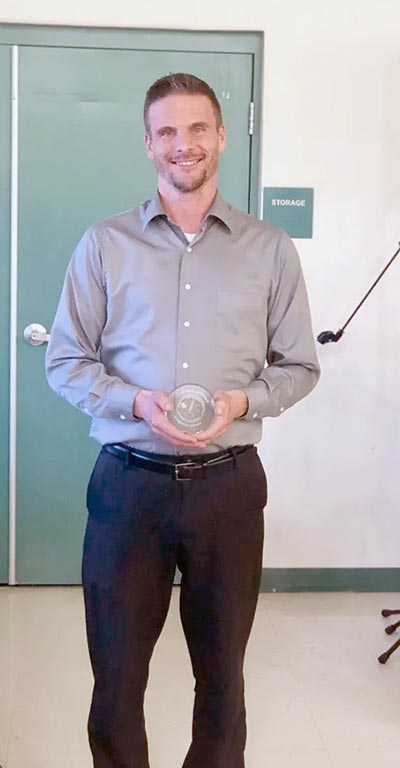 Courtesy photo | Arlyssa Becenti
The late Andrew Lawrence poses for a photo after receiving a 10-year service plaque at Window Rock Unified School District, where he wore many hats such as teacher, vice principal, principal, dean of students/academic, and cross-country and track coach.

I would tell them the truth; Andrew simply stayed because he loved the students and the community. And this love was what kept him at Window Rock Unified School District and on the Navajo Nation for over a decade.

Andrew’s origin story is always something that has stuck with me. At the young age of 26, Andrew needed a job, and he had a teaching degree from Western Michigan University and lived at his parents’ house in St. Joseph, Michigan.

One day, in his parents’ basement, Andrew took a phone interview with the principal of Tséhootsooí Middle School for seventh-grade social studies teaching position that had opened up halfway through the school year. He did not hesitate to accept the job offer. Soon after, Andrew packed up a U-Haul with his belongings and his infamous little green car, which I know some of you may remember, and he was off to Arizona to the Navajo Nation, where he knew absolutely no one and did not know the culture. This place was completely foreign to him.

When Andrew arrived, he was lost. Upon getting settled in his new home, he took a nap. When he woke up, he realized it was dark; he had no groceries and was starving; ready to find food, he saw he had a flat tire. Whether or not he had a spare or a jack – I have no clue.

But that night, Andrew was stranded in his new home, and because of the flat, he decided to walk in the dark. But he had no idea where to go.

For whatever reason, in the dead of winter, he started walking toward Fort Defiance from Window Rock rather than Bashas’ or McDonald’s. He’d usually chuckle at this point of his story because he knew he had chosen the wrong direction to walk, but at the time, he did not know this. Luckily, someone saw him walking on the side of the road, which would later become the road of choice for him to jog along, and offered him a ride. Yeah, that was Mr. Lawrence’s unforgettable first night on the Navajo Nation.

It was a hard adjustment at first, and it was difficult for him to make friends and not feel lonely. He missed Michigan and all its familiarities.

Here are a few things Andrew enjoyed most in life: eating good food, listening to music, running, watching Michigan college football, the Chicago Cubs, Navajo Nation Fair time, and history, but the thing he really loved was planning his next traveling adventures.

But even though he loved seeing new places, meeting new people, and learning about new cultures, he lived in the Netherlands for a few months and spoke a tiny bit of Dutch. The Navajo Nation was a place like no other he’d ever been to. Not one to feel defeated or to give up, Andrew worked to become a part of the community, and he never stopped trying.

Andrew was a force in the classroom, having been runner-up for Apache County Teacher of the Year, which he should’ve won. Not only was he an impactful teacher, but he was also a gifted cross-country and track coach. Andrew didn’t just coach runners; he was a runner. He was also a swimmer, but he couldn’t do much of that where he lived. It was a common sight to see Andrew with his perfect posture running alongside the road in Fort Defiance or running from Window Rock to Fort Defiance and back to Window Rock.

The whole community was his running trail; he absolutely loved it and took advantage. Cars with students, parents, or colleagues would be honking their horns and yelling “Lawrence!” as he ran, and in true Andrew fashion, he’d smile his big smile and wave or give a thumbs up.

I can’t remember how many banners or medals his runners brought home, and I know Andrew would probably be offended by that. But I remember how he was always so proud of the runners he coached. When he spoke of his runners or students, it was always with pride, and he enjoyed recounting to me the goofiness he would see or hear from the kids he was surrounded by.

The students kept him young and up to date on trends, especially when it came to what type of music was popular. Quick to smile and quick to let loose and joke around with the students, Andrew was also quick to put them in check. He was a kid at heart, but he was also authoritative when he needed to be. Probably one of the saddest days in his life was having to stop being a coach after becoming vice principal.

He missed coaching terribly but showed his support by going to meets when he could. Not just meets but also, attended football and basketball games, and school pageants; he was his students’ biggest fan.

Andrew used to tell me that the kids on Navajo were the best students he had ever worked with, and they deserved quality education, and he really wanted to provide that. He became active in the AVID program at the middle school when they had it and when he was a teacher. He was so concerned about the students’ well-being and always offered to listen and talk with them just to show he was there to help in whatever way he could.

He wanted to get students excited about the future, so he encouraged them to go to college. Again, leading by example, Andrew didn’t only teach; he was a lifelong student himself.

A year after meeting him, he set his goal of becoming a Nationally Board Certified Teacher, a rigorous endeavor, but he took the challenge, and to no surprise, he passed his first try. Wanting to elevate himself more in his career and education, he then decided to go for his master’s at Grand Canyon University, which opened the door for him to become a vice principal and then principal for a time.

No job was too big for him; he was also a dean of students and an academic coach. He had talked about getting his Ph.D. one day, and knowing him, he probably would’ve eventually. He made getting his master’s or NBCT look so effortless while being a coach and teacher, but it was really stressful, time-consuming, and frustrating. But he did it.

Imagining Andrew, I can see him walking briskly down the hall at Tséhootsooí Middle School, the bus loading zone, or at a meet, always with that stern look as if he was on a mission. I can imagine him shaking hands with students, and shaking hands was Andrew’s thing.

Current and former students who would see Andrew outside of school would run up to him just to shake his hand, and you all have to know that he really appreciated that so much. And if he saw a student out and about and pretended not to see him, he would get a little hurt. I can hear him yelling at students with his distinct roaring voice that could be heard from far distances. I can still hear him practice his clans and introduction in Navajo repeatedly. I can still hear him say “yáadilá” when he got frustrated.

When young non-Navajos come to teach on the Navajo Nation, usually it’s just a resume builder for them, and more times than not, they are there for a quick two years and then leave. They go off into the abyss, never to be heard from again, leaving no indelible mark but bragging of how they once taught on a reservation.

But Andrew was different. He wanted to stay. He loved the students and the community. He started a life and a career in Fort Defiance and felt he owed so much to the place and people that gave him his start.

After reading his obituary, I was saddened to see that his time here wasn’t mentioned because he was integral to WRUSD and Fort Defiance. As someone who knew him better than anyone else, he saw every day the challenges he faced at work, celebrated his accomplishments, and cheered him on over the years. I can say without a doubt all he wanted was for his students to succeed in life and to see the world and for future students to get the quality education they deserved.