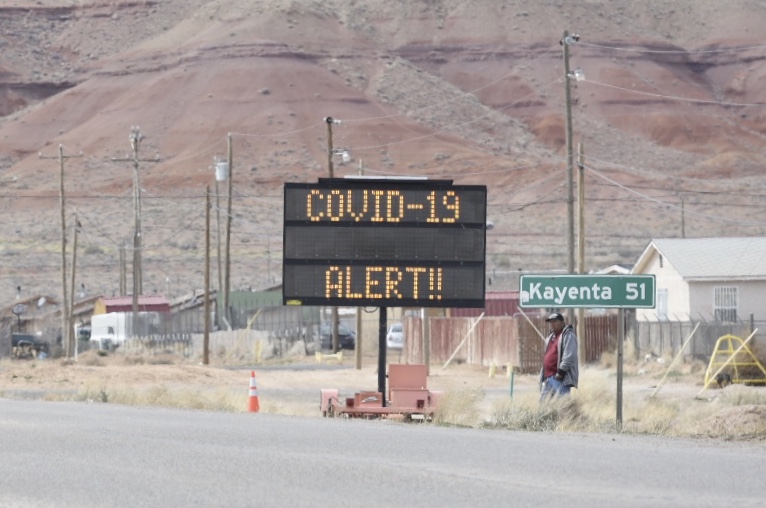 Navajo Times | Donovan Quintero
A man stands near a sign warning drivers of the coronavirus on Saturday in Many Farms.

Navajo Nation President Jonathan Nez said there are now 71 confirmed COVID-19 cases on the Navajo Nation as of Thursday evening, and over 500 tests pending.

“This is a serious pandemic that has hit the world, the U.S., now our Navajo Nation,” said Nez on KTNN. “People who post ‘Government isn’t doing anything.’ Government can’t do everything! You hear the urgency in my voice. We can stop the spread by staying home!”

Although there have been many tests that have come up negative, the increase in cases in such a short time proves the public is not taking this virus seriously enough and isn’t staying home, Nez said.

Nez said there is misinformation circulating in both social and traditional media. He said first responders are burning out because they are working non-stop. He also said food and supplies are being delivered through the Division of Community Development. So the efforts are out there from government to first responders.

He also said people are demanding road closures and roadblocks, which he said first responders don’t have the capacity to conduct.

He also said even if he did close the roads people would start to complain of the inconvenience it would cause them.

“If we do roadblocks we are going to take those services away from our elders,” said Nez.

During a March 20 special session of the Navajo Nation Council, legislation sponsored by Council Delegate Herman Daniels was passed as part of a consent agenda, which means no debate was made on the legislation and it was bundled with other items.

The intent of Daniels’ bill is to close all maintained roads to all visitors and tourists, and restrict their travel on Navajo in response to COVID-19. This would not be lifted until the state of public health emergency is lifted.

Over the course of this pandemic it has been suggested multiple times to close the roads in and around the Navajo Nation to ward off tourists and visitors, but Navajo Nation Police Chief Phillip Francisco has said this move isn’t feasible.

The resolution is currently on Nez’s table waiting for his approval or veto. But the problem seems not to be visitors and tourists, but rather the Navajo people who aren’t staying home.