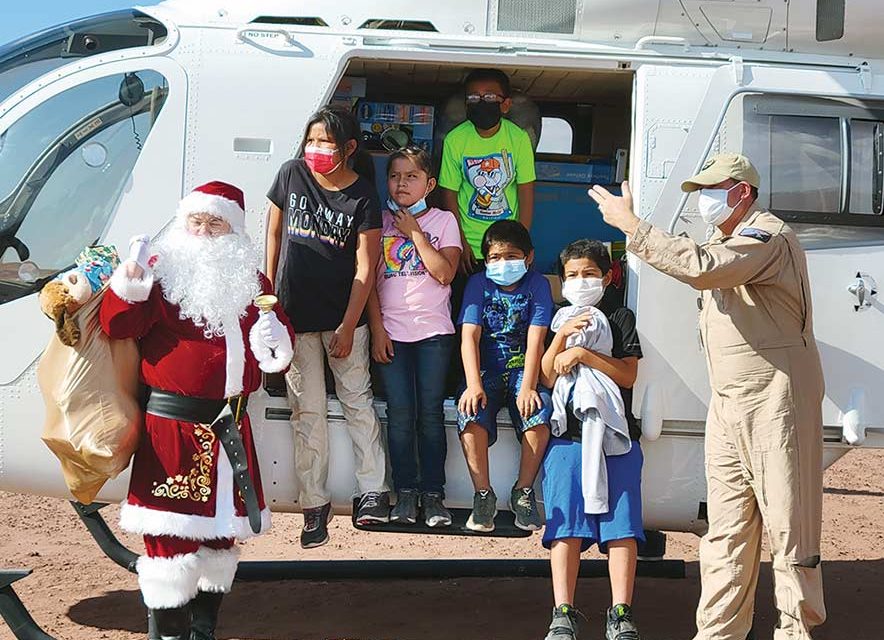 Six short months ago, the COVID-19 pandemic put a damper on the holidays because everyone was on lockdown, leaving little room for celebrations or gift-giving.

To make up for that, the Native American Sustainability for Veterans and those in the Uniform COVID-19 relief group decided to carry out the Christmas toy donation run they had planned last Dec. 25.

To the thrill of hundreds of children and families, Santa Claus made his way to Chinle in his helicopter sleigh last Friday with over $10,000 in toys in tow donated by the Maag Toy Foundation.

“We had this idea that the Navajo children didn’t really have a Christmas last year because of COVID because they were all quarantined,” said Tom Eisiminger, NASVU co-founder. “We came up with the idea of doing a Christmas in June.”

Eisiminger, who traded his uniform for a Santa suit for the occasion, said one child at the event asked him, “Why didn’t you come at Christmas time?”

He deftly responded that Santa and his elves were also quarantined and couldn’t travel.

“Santa didn’t forget us!” she announced. “He was on quarantine!”

“That was the sweetest thing,” said Eisiminger. “That sort of sums up the whole thing. We’re all members of the human race and we’re not forgetting anyone or leaving anybody behind.”

When the kids asked about Santa’s reindeer, Eisiminger told them they couldn’t fly in the hot weather, so they stayed back at the North Pole.

“We thought it was great!” said Cheyenne Autumn Van Winkle, mother of Zephaniah and April. “My kids were excited, especially with COVID and everything going on, we didn’t really celebrate their birthdays or Christmas last year at all.

“I really appreciate the fact that they went out of their way to distribute toys to the kids,” she said. “It felt really good for them and for me.”

Zephaniah said the most exciting thing about Santa’s visit were the toys they received that included Lego sets, games and dolls.

“It was cool and it was awesome!” said April. “Santa said to always be good and be good to other people.” 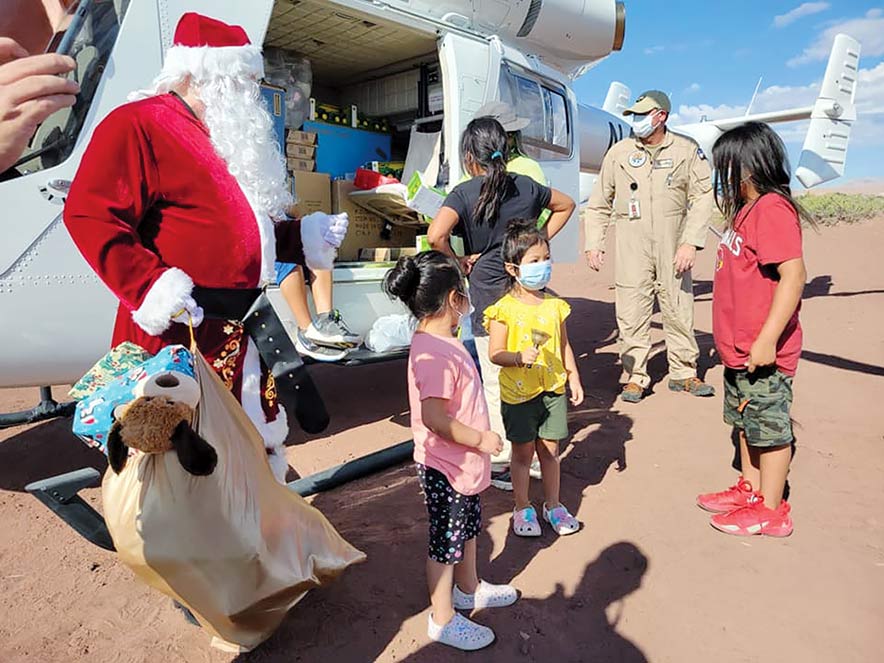 Courtesy photo | Christine Wenger
In a flurry of excitement, a young girl rings the bell notifying the community of Santa’s arrival in Chinle.

What began last March as a small grassroots COVID-19 relief effort organized by Eisiminger and Bob Dalpe, who gathered donations and delivered groceries to veterans on Navajo, has now grown into the nonprofit NASVU with the support of Navajo veterans on the ground across the Nation that have helped coordinate humanitarian distributions.

“Both Tom and I saw brothers and sisters in arms in need and we decided to help,” said Dalpe.

Eisiminger, a U.S. Army veteran, and Dalpe, an Air Force veteran, are members of the Arizona Veterans Hall of Fame, a select group recognized for their work to benefit veterans.

In one short year, under the umbrella of the Veterans Medical Leadership Council, whose mission is to ensure the health and welfare of Arizona veterans, NASVU has raised and delivered over $700,000 in goods and services to help Navajo veterans and their families.

The relief group especially aimed to serve those in rural communities most heavily impacted by COVID.

“The magnitude of the problems related to COVID on Navajo were huge,” said Eisiminger. “You compare it to any other county in the country, the challenge there just dwarfs anything that was going on anywhere else.”

Last fall, Central Agency Navajo Veterans Organization Commander Pete Tsinnijinnie said that Eisiminger and Dalpe filled a need when no one else would.

Donations and transportation for the NASVU “missions” to Navajo have been provided through MD Helicopter, Jack Travis Trucking, USAA, American Legion, the Arizona Department of Veterans Services, and a host of other businesses and individual donors.

“We said, let’s make the 50th mission a big one with these toys,” said Eisiminger.

And so, they did.

They loaded a large UHAUL trailer and helicopter with toys and headed to Chinle from Phoenix on a hot summer’s day and made good on their Christmas intention.

Maag said the toys were actually purchased last December and have been in storage since.

“Because of COVID we couldn’t come, so that was pretty disappointing,” said Maag. “But the wait was worth it.”

To see the kids smiling and having a good time was just “priceless,” said Maag.

“I don’t think I’ve ever seen Santa Claus arrive by helicopter,” chuckled Maag. “This was really a significant day because the kids were so locked up for so long, we hope that the toys will brighten their days.”

“It was a good turnout,” said Tsinnijinnie. “People stayed in their vehicles and CDC guidelines were followed. We cannot say enough thank yous to Tom and Bob for what they’ve done.”

Dalpe said it’s rewarding to hear that they’ve made a difference in people’s lives, especially during COVID.

“The kids had a blast,” said Dalpe. “They were so happy. They thanked Santa Claus for not forgetting about them.”

While the COVID-19 relief effort is tapering off as the severity of the pandemic declines, Eisiminger and Dalpe are shifting their focus toward health, wellness and sustainable solutions for water, power and housing needs in Navajo’s most remote communities.

NAVSU will continue to source water tanks for distribution all over the Nation and are working with a solar company to provide panels and refrigerators for those living off the grid.

Maag also donates his public relations and marketing services to the nonprofit and helped build the NASVU website.

“These veterans helping veterans are remarkable,” said Maag. “These guys just have a good heart. I can see how important their mission is to help people in Navajo country. I really love their story.”