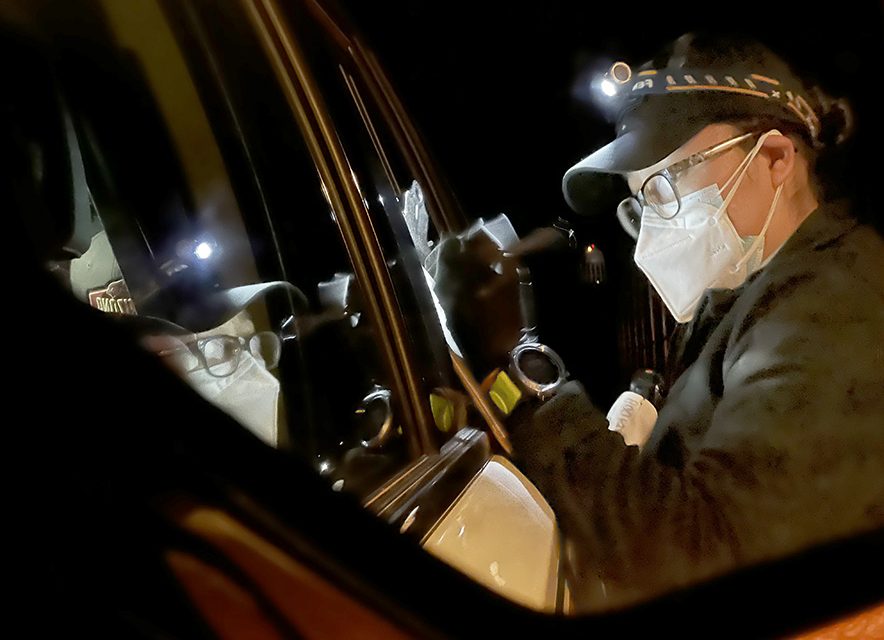 Navajo Times | Krista Allen
A Navajo Corrections officer at the Tuba City District jail facility does an intake of an inmate at 6 a.m. on a Sunday.

The Navajo Department of Corrections’ Tuba City District jail facility is experiencing a COVID-19 outbreak, according to the agency.

“All the facilities (six others), we seem to be getting peaks (in line with) the community,” Greyeyes said.

She said the facilities had seen Covid outbreaks in waves typically followed by a decline in infections.

“So, it’s not just the Tuba City facility,” Greyeyes explained. “At all of them, we go through phases. Tuba will get them, and it comes again. It rotates. And a lot of it just because of the activities going on––people not wearing their masks as much anymore––a lot of indoor activities happening.”

She said during the pandemic’s peak in the Navajo Nation, she and her staff took outbreak control measures in the facilities, even after Arizona Gov. Doug Ducey lifted the state’s remaining restrictions to curb the coronavirus in March 2021.

“We were able to control it,” Greyeyes explained. “But now and then, we ended up––somehow, one falls through the cracks because they (inmate) tested negative when they came in and then later tested positive, and it got to others.”

Greyeyes said her corrections staff are testing inmates for COVID-19 up front at intake upon processing for entry into any of the Navajo Corrections detention centers.

“So, we’re trying to do what we can to prevent it,” she explained. “During the holidays, fair activities––during those periods, the week after, two weeks after, we see the peaks, and then they go down.

“The other we can’t control is staff––when they travel off-reservation to attend different functions, and they may not know they have caught anything until they actually start to feel the symptoms,” she said. “By then, it may have been passed.”

Greyeyes said Navajo Corrections isn’t doing daily nor weekly Covid testing on staff because there are not enough test kits available. Indian Health Service provides at-home COVID-19 test kits to the agency every month, but it runs out quickly because of the daily bookings.

Wearing a mask in public while in the reservation, according to the Navajo Department of Health August public health order, is mandatory.