On Tuesday, the U.S. Department of Treasury announced that it will begin to distribute $4.8 billion (60%) of the $8 billion Congress allocated for tribal governments in the Coronavirus Aid, Relief, and Economic Security Act, signed into law by President Donald Trump on March 27.

On Wednesday, the Navajo Nation controller’s office announced that the funds were received. 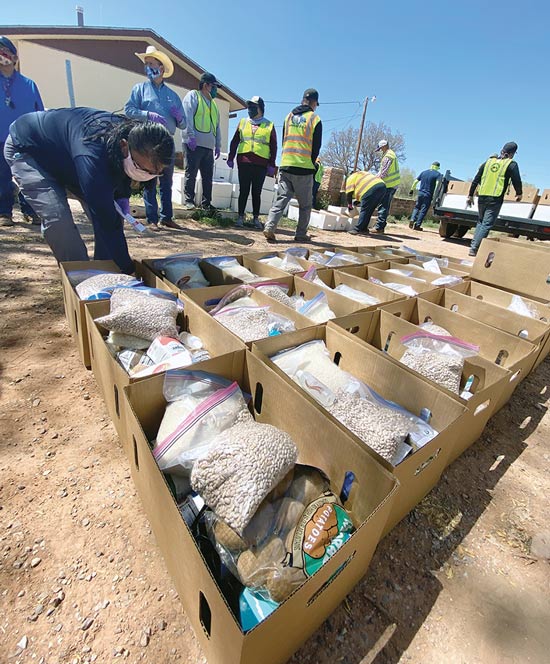 The intent of the funding is to provide direct financial assistance to tribes and local governments for the impacts related to the COVID-19 public health emergency.

“We are pleased to begin making $4.8 billion in critical funds available to tribal governments in all states,” said Treasury Secretary Steven Mnuchin. “Our approach is based on the fair balancing of tribal needs.”

By Tuesday afternoon it was announced by Trump at a press conference in Arizona that the Navajo Nation can expect at least $600 million, which represents 6.25 percent of the total $8 billion earmarked for tribes in the CARES Act.

“We will leverage every resource we have to bring safety to our tribal communities, and we will not waver in this mission,” Trump said in a statement.

The Trump administration stated it has also allocated over $1 billion through the Indian Health Service to support tribes, tribal organizations, and urban Indian organizations in coronavirus response efforts.

“We thank our congressional partners for working hard to convey to the Treasury and Interior secretaries the importance of getting this funding out the door and to tribal nations,” said Speaker Seth Damon. “We also thank President Trump for approving this relief package for all tribes.”

In a press release on Tuesday evening, the Navajo Nation president’s office said it looks forward to ensuring the federal stimulus funding is put to good use. “The executive branch will provide a comprehensive plan for the effective use of these stimulus funds,” said President Jonathan Nez.

The Navajo Nation Council is also preparing legislation to accept and manage expenditures for COVID-19 response activities, in line with federal law and as required by the Navajo Nation Code, according to a press release from the speaker’s office.

“Certainly we are thankful,” said Delegate Daniel Tso. “This will be a short-term infusion of funds to help respond, mitigate and recover.”

Tso confirmed the monies have to be spent by Dec. 31, 2020, so Navajo Nation leaders have their work cut out for them. The CARES Act funds for tribes by law were supposed to be released by April 24, so there has been a two-week delay. Originally the White House did not want to release any monies out of the approximately $2 trillion CARES Act package to tribes.

“Treasury’s announcement is the definition of ‘too little, too late.’ It comes weeks after the deadline and billions of dollars short,” said U.S. Sen. Tom Udall, D-N.M., vice chairman of the Senate Committee on Indian Affairs. “All $8 billion of the tribal relief fund— and not a dollar less — needs to get out the door, on the ground, and into the right hands immediately,” said Udall. “And the administration must stop deploying COVID-19 resources in a way that systemically excludes tribes and Native communities.”

Udall said the announcement comes just a day after the administration said it would severely limit access to the CARES Act Provider Relief Fund for the Indian Health Service and exclude Native communities – despite the fact that some parts of Indian Country, like the Navajo Nation, have some of the highest coronavirus infection rates in the U.S.

The distribution formula for the first $4.8 billion in funding among the 574 tribes, which has been fiercely debated and litigated in past weeks, was based on population data. The 2010 Census counted 332,129 Navajo living in the U.S. The second distribution of the balance of the funds will be calculated based on number of tribal employees and COVID-19-related expenditures. It remains to be seen whether Alaska Native corporations will receive any of the remaining funding.

“The Treasury is only releasing 60 percent of the funds, which clearly indicates that they are going to continue to fund Alaska Native Corporations,” said Nez. “It’s shameful that the first citizens of this country are having to fight over and over for what is rightfully ours.” The Navajo Nation on April 21 joined a lawsuit by tribes seeking to halt any funds going to ANCs, which was upheld by a federal judge.

“Alaska Native Corporations should not receive funds that were specifically allocated for federally-recognized tribes. Today’s announcement of funding for tribes is far too late. We’ve lost 79 lives so far and far too many of our people have the virus.”