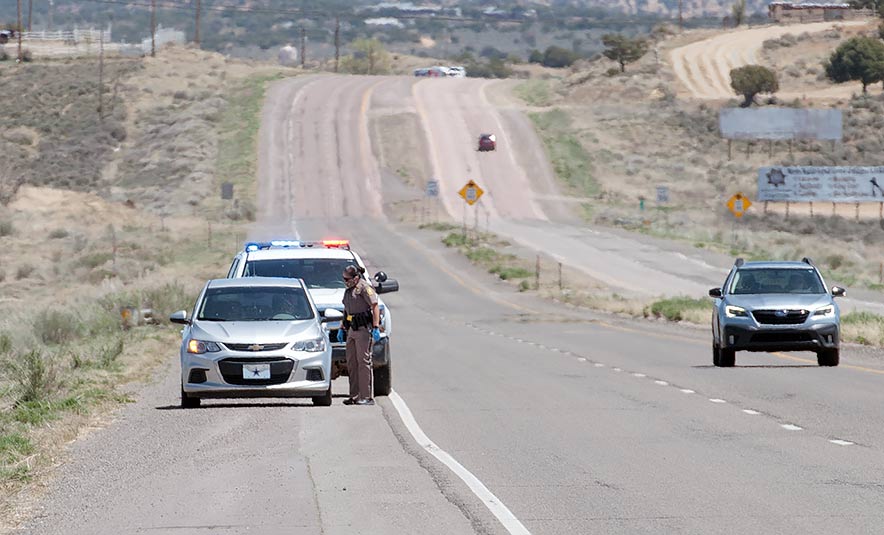 For more than 60 days, the Navajo Nation government has done all it can to educate and inform Diné of the coronavirus.

They even put measures in place, like nightly and weekend curfews, in hopes of “flattening the curve” of the highly contagious virus. Most people have complied with the measures but, according to Navajo Nation Police Chief Phillip Francisco, there are a few who continue to put their own and others’ lives at risk.

The fine line between keeping people safe and alive and violating their Constitutional rights, Francisco said on Tuesday, has been handled well by his officers. Still, the legalities are ambiguous at best, he added. “We can’t force them to comply,” he said. “It is America. That’s the struggle that law enforcement has had, itself, is, how far do we go to protect our people and how far are we willing to go? Are we going to infringe on people’s rights?’

“We had to take that into account,” he said. “I think this is the best we can do without infringing on people’s rights anymore.” Since the curfews were implemented, Navajo police officers were tasked with ensuring people within reservation boundaries adhered.

Before the curfews, the tribe declared a public health emergency. The first two confirmed cases were reported on March 17. Three days later, the tribe established a shelter-in-place order.

By March 25, 69 Navajo citizens had contracted the virus. Nightly curfews ordering people not to be out on the streets between 8 p.m. and 5 a.m. went into effect on March 30. Navajo police setup checkpoints along highways throughout the reservation to begin informing the public there was a nightly curfew that was in effect until further notice.

Eleven days later, on April 10, a 57-hour curfew, beginning on Friday evening and ending Monday morning, was established. Only essential workers like those in health care, semi-trailers, grocery stores and restaurants, would be allowed on reservation roads provided they had an official letter from their supervisor.

A criminal nuisance citation was created for curfew violators. If found guilty, the crime would cost violators up to $1,000 and/or 30 days in jail. “I think we did a really good job,” Francisco said. “It’s still going to go on for who knows how long. People are innocent until proven guilty. It will be up to a judge and a prosecutor.”

During the fourth 57-hour curfew, Navajo police saturated State Highway 264 on Saturday, stopping vehicles and issuing tickets to drivers who could not provide documentation of being an essential worker. One police officer, who did want to be identified, said he issued 27 tickets. Not all were for criminal nuisance, he said.

Francisco said last weekend, police issued a total of 203 tickets. About 30 of the tickets were for criminal nuisance, he added. “Even though some of those are traffic citations, they are still making contacts with the intent of (curfew) enforcement,” he said. President Jonathan Nez said on Tuesday the tribe was going to have another 57-hour curfew this weekend.

After that, they were going to discuss whether or not another weekend curfew was needed. Nightly curfews would still be enforced until further notice, he added.