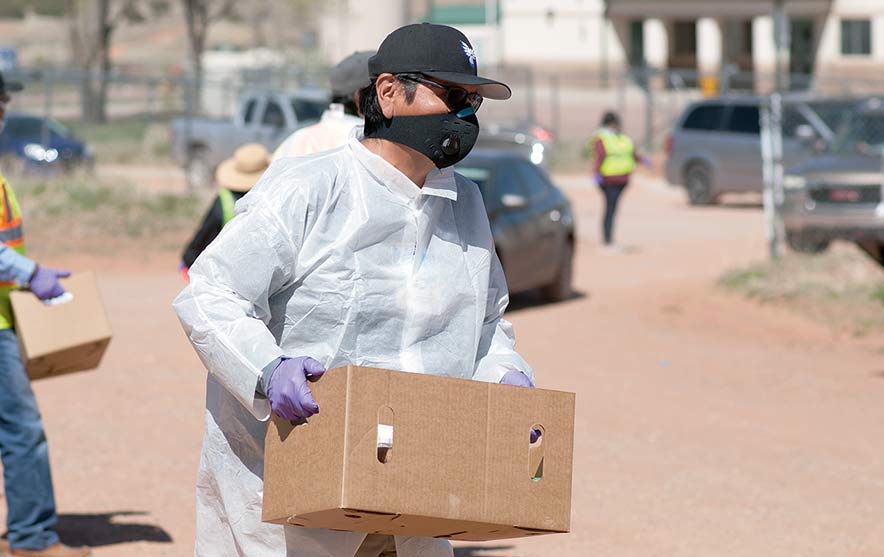 The wait is finally over. The U.S. Treasury announced Tuesday that a portion of the Coronavirus Aid, Relief and Economic Security Act would be distributed and the Navajo Nation will receive over $600 million from the $8 billion.

And the Navajo Nation controller’s office announced Wednesday that the funds had been received. The Nation has been using its own resources and donations while the federal government continued to withhold the $8 billion it had earmarked for federally recognized Native tribes on March 27, when President Donald Trump signed the CARES Act. As the Nation waited for these dollars the numbers of COVID-19 cases increased rapidly.

On April 22 the Navajo Nation joined 10 other tribes in a lawsuit against the U.S. secretary of the Treasury, and on April 27 U.S. District Judge Amit Mehta of the District of Columbia sided with tribal governments in the first round of the case. “People are struggling while the federal government holds onto the aid needed for our Navajo people,” said Nez at the time. “Eighty percent of our citizens are listening to the stay-at-home order. “I see first-hand that people are struggling,” he said. “They are coming to these distribution sites to get food in order to get through these curfews.”

The curfews have been in effect for over a month, starting with the daily 8 p.m. to 5 a.m. curfew, then the 57-hour weekend curfews in order to stop the spread of COVID-19. As of Tuesday, the Navajo Nation’s COVID-19 cases reached 2,559 and the virus had killed 79. For the past week Nez and Vice President Myron Lizer have been traveling to communities to distribute donations and supplies to citizens.

As Lizer and his wife Dottie Lizer were at a roundtable with President Donald Trump in Phoenix on Tuesday, Nez was in Crystal and Sawmill with staff giving out donations to over 300 families. “Trump was in Phoenix today, in the heart of Native America,” Nez said. “He utilized his pulpit to announce that he’s giving monies to the tribe, when in essence the federal government lost the litigation … so they had to give the money to the tribes. The courts actually forced him in a way to get this money out.”

The feds will start by distributing 60 percent of the $8 billion to tribes based on population data. The remaining 40 percent will be disbursed based on the total number of persons employed by the tribe and any tribally owned entity. Payment to tribes will begin today and will take place over several banking days, according to a press release.

Amounts calculated for Alaska Native Claims Settlement Act regional and village corporations will be held back until pending litigation is resolved. Payments to tribes based on employment and expenditure data will be made at a later date. “The concern I have about this is 60 percent of the $8 billion went to tribes,” said Nez. “But why not give 100 percent? I think the federal government is gearing up to fight against these 10 tribes (who filed the lawsuit) so they can give this money to Alaskan corporations.”

The Navajo Department of Justice, who along with Rothstein Donstelli law firm represented the Navajo Nation in this litigation, and Attorney General Doreen McPaul have been put in charge of all donations the Nation receives.

So far the tribe has received more than $2.1 million in donations. A couple of the biggest contributions came from the Arizona Diamondbacks with $25,000 and the law firm Hueston Hennigan with $20,000. People from all over the world, most notably Ireland and the United Kingdom, have also contributed. McPaul said more than 24 DOJ staff are assigned to answer calls and emails from people wanting to donate.

She said logs are kept of what is coming in, separated by monetary donations, medical supplies and “other.” “We are extremely grateful for the outpouring of support coming into the Nation,” said McPaul. “Those will help support our efforts to address COVID-19 here on the Navajo Nation.”

When Navajo Nation Council heard of the CARES Act disbursement they promptly sent out a press release stating they would introduce legislation to accept and manage the expenditures, in line with federal law and as required by the Navajo Nation Code.

Nez said he would like to see the $600 million go toward infrastructure, including water lines, and homes, as well as investing in Navjao businesses rather than having to travel to border towns to buy supplies and necessities.

“Based on what we experienced through this pandemic and figuring out why it spread so quick, it was because of the need for water and the need for more housings,” said Nez. “We need to get more homes built and that has always been our platform. We already have a plan for that but now there is money available.” He also gave a word of thanks to those who donated, he also gave thanks to the strong Congressional support given to Navajo during this CARES Act issue.

“We have friends of the Navajo people and God bless their hearts,” said Nez. “They are putting money, putting their resources, helping this Nation out, with food, supplies and prayers. We are getting those foods and supplies out there because people are struggling.”