Ever been to a park in Flagstaff or Farmington and seen a post with chained hoops attached making a loose basket and thought, “That’s a strange jungle gym”? The contraption is actually the goal basket for disc golf, a sport that has slowly seeped into the Navajo Nation and, despite the ongoing COVID-19 pandemic, continues to grow.

Devon Lapahie is at the forefront of this. He’s one of the best disc golfers on the reservation, if not the best. The young varsity basketball coach from Northwest High was introduced to the sport by a friend over a year ago. Since then, he has competed in recreational tournaments, met aspiring disc golf champions and is now hosting competitions. 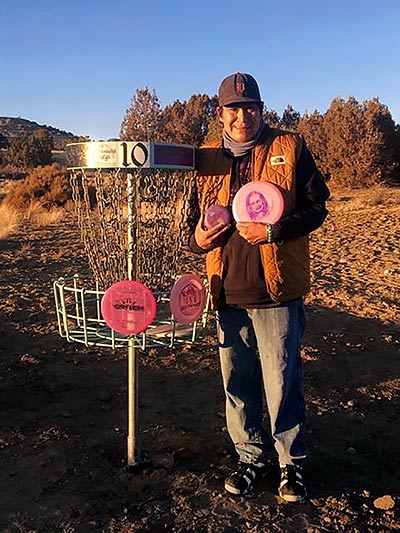 Submitted
Devon Lapahie, the Northwest varsity basketball coach, is at the forefront of growing disc golf, a sport that has slowly seeped into the Navajo Nation despite the ongoing COVID-19 pandemic.

“As a coach, I miss my boys, but this is my other passion that I built,” Lapahie said. “People go, ‘Oh, you have a hobby now?’ I’m like yeah, that hobby turned into a passion. I feel that in this world that we’re in right now, to have something to love and have passion for is remarkable and a blessing to have.”

Lapahie has found disc golf to be a good game to play during the pandemic. Players are able to meet and socialize while maintaining social distancing. With many activities on the Navajo Nation restricted in an attempt to stop the virus, many of Lapahie’s friends have joined him in the game.

“You build different types of character and different types of value through this sport,” he said. “It’s a physical sport, you’re walking. I never thought I’d walk 10 miles in one weekend or that I would be so fired up and excited to even get up early in the morning to go to the disc golf course and meet my friends there.

“The more and more we grow this sport, to the community members, to the elderly and people of all walks of life. It doesn’t really matter what race, religion or sexual orientation that you have, we’re here to throw the disc.”

The history of disc golf is vague. The earliest record of people playing with a disc in a golf like manner dates back to the early 1900s, but the game may be older than that. The modern version of the game was finalized in the 70s.

It’s styled like golf, but instead of hitting a ball with a club, you throw a disc. There are disc courses where players can compete, but people can really play anywhere.

“When I don’t want to drive to Farmington or when I don’t have enough gas or when I just want to throw, I just go out into the open field or go on a dirt road for a drive somewhere on the rez and just throw,” Lapahie said. “We have all this open land that can be used to get people out and active.”

The sport has grown its following, having its own divisions that spread across the country, thousands of courses to play at and even world championships with athletes from different nations.

Lapahie said that disc golf even has the potential of becoming an Olympic sport, something he would very much like to see. There are some schools in the Midwest that have created a disc golf team and he hope that one day schools on the Navajo Nation would make the same investment.

“I’ve been competing and I had my bad days and good days and my good putts, bad putts and real ugly putts,” Lapahie said. “But at the end of the day it’s fun regardless if you play bad or good. It’s all about having fun and having good company”

He’s played in six different tournaments so far in the past year, coming in either 2nd, 3rd, or 4th place. He is considered an amateur and yet shows great promise.

“I have four aces [holes-in-one] in my first year of disc golf and I’m hearing that people been playing for six, seven or 10 years who haven’t gotten an ace yet,” Lapahie said.

Lapahie credits his former years as a basketball player with helping him transition into a disc golf athlete. As a point guard he almost always held the ball and learned the different throwing techniques. Throwing a disc is similar to learning a new basketball play, he said.

Lapahie graduated from Shiprock High in 2009, and played basketball at Fort Lewis College for a year before transferring to San Juan College. He played across the country and even in Australia. Eventually he graduated with his degree in the building trade, but is considering taking online classes for another degree.

Lapahie described going through ups and downs in his life, one of the most recent downs being the loss of an icon who had inspired him since he was a kid.

After the death of Bryant, Lapahie briefly lost his passion for basketball. His idol’s passing made him question his love for the sport, but also what really mattered to him.

“It really opened my eyes to, ‘Man, what else can I do to get myself right?’” Lapahie said. “What can I do to inspire others, to help them achieve their personal greatness? How can I teach people the sport that I’m passionate about, to get them to love what I love?”

It was disc golf that helped him get his mind straight again and now he is determined to spread the sport.

“I wasn’t feeling too great, just going through he motions, but now I got the word out, (I) get to grow this sport just like I dream,” he said. “I’m really thankful and appreciative of that.”

The pandemic has caused much grief and restricted a lot of our former activities, but Lapahie says disc golf is compatible with a lot of COVID-19 protocols.

Recently he has started working with Dynamic Discs and now he is in charge of the local Dynamic Discs Winter Marksmen League. He helps amateur players learn the sport and sets up competitions in the region.

The first competition he hosted was Veterans for Vets, held the day after Christmas last year, where they raised money for the local veterans’ organization in Hogback, New Mexico. He was tense and nervous up to and during the event, but when he saw the daughter of one of his friends taking part, that nervousness turned to joy. He plans three additional competitions for this upcoming season, with more later in the year.

Through all the turmoil and uncertainty, Lapahie gives credit to all his past teachers and one coach in particular named Tony DiNallo.

He met DiNallo back in college and the old coach took him under his wing. It was with his guidance that Lapahie realized his passion for coaching, and his mentor took it a step further by helping Lapahie get all of his coaching licenses together. It was thanks to DiNallo that Lapahie became a varsity coach.

In DiNallo’s final years he was diagnosed with ALS, Lou Gehrig’s disease, but that didn’t stop the old coach even when he went from walking to using cane, then a wheelchair then finally an electric wheelchair.

“I can still see him, still practicing in the gym with his wheelchair, still wheeling around and demonstrating to the kids,” Lapahie remembers. “That’s how much love and passion he had to coach, but no matter what he was still coaching. If somebody could still be like that and have that disease but still coach, man … That’s why I started coaching, because of him. He just opened up that door for me to start coaching at Aztec.”

Before passing, DiNallo left Lapahie his old college playbook, which included secrets and plays collected through the years. But what Lapahie found most valuable about it, is that it’s all written in DiNallo’s handwriting: a treasured personal memento. DiNallo inspired him to be a good coach, to be there for the kids.

Even though they are no longer playing or practicing, Lapahie stays in contact with the Northwest High team, making sure they’re all right, have PPE, food, and internet connection to do their homework. He shows devotion like his father did when he was coaching his son. Back in the day he would sometimes cross the whole Navajo Nation picking up Lapahie’s teammates who didn’t have a ride on the day of a game.

Now Laphaie uses that same care and dedication as he spreads the sport of disc golf, encouraging anyone who is interested to check out the sport online at the Dynamic Disc website and not be afraid of trying something new.

“I’ve taken my defeat, I’ve taken my losses on the court and off the court,” Laphaie said. “It took a different sport to bring me back to fruition to what I really have a love for and a passion for, and that’s for coaching the next generation and … teaching them my values and what my coaches taught me, what my grandparents, what my nali and nali-man taught me, and carry on the teachings that was bestowed and taught to me.

“That’s all I really want at the end of the day, keep those teachings going, those thoughts, teachings and blessings I bestowed onto others. One foot in front of the other.”