NB3F takes a swing at coronavirus 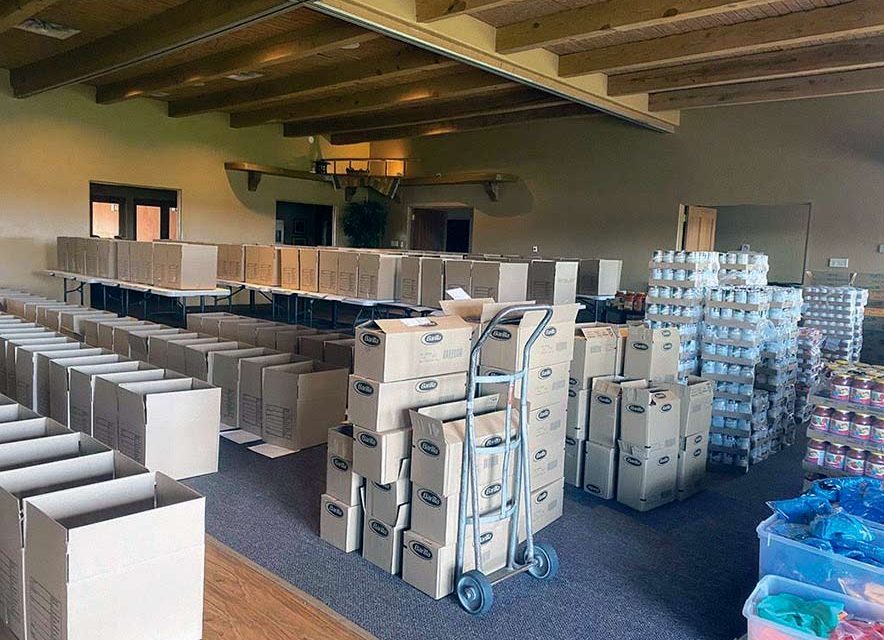 Submitted
Built boxes and pallets of food wait in a Santa Ana Pueblo banquet hall where the Notah Begay III Foundation will put together boxes of food to be shipped out to pueblos and the Navajo through the NB3 Foundation COVID-19 Response Fund.

Not long after Dikos Ntsaaígíí-19 hit the Navajo Nation, Notah Begay III knew he had to do something.

Begay III, Diné and member of the Pueblos of San Felipe and Isleta, who is an NBC Sports and Golf Channel analyst and founder of the Notah Begay III Foundation (NB3F), gathered his team to find a way to help Navajo and Pueblo communities in the area.

He said the coronavirus itself did not prompt the need to act; it was more the factors that have long plagued the nation and pueblos.

“It wasn’t the direct introduction of the virus, it was the fact that our health care infrastructure was so weak, that it was taking the third-highest toll of any community in America,” he said. “People that I grew up with, that I worked with now, that I went and played in basketball tournaments with at St. Michael’s High, Rehoboth, and Thoreau … all those people are dealing with it and not having a way to fight.”

Begay decided to fight for them.

In unfamiliar territory, the team gathered to figure out what was the best way to approach the battle against COVID-19.

They set up a donation page and raised some money, enough to give out 25 laptops to Navajo students in the Four Corners area so they could continue with their remote learning, but the need was even greater.

The team went back to the drawing board, and after a fateful conference call with the Golf Channel, Begay knew exactly what the foundation needed to do.

Begay was overtaken by emotion during the visit with his colleagues as he discussed the impact the virus has had in his communities.

“When I got the call, … a bunch of my colleagues from the golf industry, most of them were unaware of just the challenges that Native people have faced over the years, particularly Navajo people,” he said. “Anything that I do I want to do right. I think that’s what I try to impress upon our team at NB3F … I try and set a good example.”

The team decided to provide food assistance to families on the Navajo Nation and throughout the Pueblos and created the NB3 Foundation COVID-19 Response Fund.

While the Foundation itself is known for its efforts to create healthier Native communities through wellness programs and grants, the relief effort was something out of everyone’s realm.

Begay said it seemed like a simple task, but they soon learned how difficult it would be.

The team set out to create 10,000 individual units of food but had a difficult time finding a place to store the food. They also had to comply with state and tribal/pueblo regulations and allow only five people at a time to box the food, in a safe place.

“The logistics of it is a huge undertaking, that’s just not what we do as an organization,” Begay said. “We had to reengineer our internal functions.”

Around that same time, the foundation raised over $50,000 but had a difficult time finding food.

They turned to local entities and partnered with Laguna Development Corporation, which owns a grocery store, and went through them to get the food supply. They also partnered with Santa Ana Pueblo, who lent their banquet hall for storage and packing.

Begay said it was important to be strategic in deciding what foods they would buy. Staying true to their mission of creating healthy Native communities, they knew they wanted foods that were healthy and would store well.

Deciding what would go into the boxes was easy. Begay said about 80 percent of the Foundation’s staff live in the communities they are from, including two who have returned home to work from home and be with their families. He left it up to them to decide what the communities needed.

“They got together and decided what was going to be in the boxes,” he said. “We wanted it to be very well thought out.”

The boxes include pasta, rice, beans, canned chicken, and water to drink; the Foundation was able to get 4,000 gallons of water to distribute.

Their latest challenge has been trying to find a large supplier of blue corn, which Begay said was important to consider when putting together their grocery list.

“We are trying to find blue corn for these families,” he said. “That’s how we wanted to honor our cultural foods as well.”

On shipment day, a team of five from the foundation will come together at the Santa Ana banquet room to unload food from trucks, organize the food, build boxes by hand, and package them.

Everyone who takes part does so voluntarily, but it didn’t take much to get them to volunteer.

“We’ve got board members that have six-figure salaries, working for big companies, and the staff coming in to support, and we have volunteers coming in,” Begay said. “This is a grassroots initiative. Similar to some of the other initiatives taking place on the reservation. I’m just happy that it’s getting done.”

Renee Goldtooth-Halwood, Diné, an evaluation specialist for NB3F, returned home to Whippoorwill, Arizona, a small community between Chinle and Piñon.

She returned in mid-March and has seen the ways in which the spread of the virus has affected her small community.

“We have a hogan there. I’m with my mother, just making sure she’s safe and helping her. She’s been an asset to our family, she’s been purchasing food with the little money she has to provide for the community,” Goldtooth-Halwood said. “We’ve been really trying to save up to purchase more items in the more rural areas. We’re trying to get to the elders who may not get out to the community. Recently, we’ve been really fortunate too with the Foundation to provide additional funding to the community.”

Goldtooth-Halwood said each BN3F staff member was gifted with a small amount of money that they can use to help their community in any way they choose.

She said she’s learned of how her colleagues have spent their money to help people in their community, but she’s trying to decide what her approach will be.

“When you’re in the community there’s a lot of need so they’ve given us that choice to help out, to leverage and strengthen our communities,” Goldtooth-Halwood said. “Some ways people are purchasing food, some are purchasing baby items, diapers for families who are in quarantine, who aren’t able to get out. Others purchase firewood, that’s another need.”

Goldtooth-Halwood said she’s thought of purchasing grocery items for families, but it’s become more and more difficult to do so in local stories and in stores within border towns.

“It’s one of those things where you can’t just purchase in bulk; I can’t go to Bashas’ and buy 20 loaves of bread. I’m trying to strategize what is the best way. I might just buy a load of wood and split it in half and give it to two families,” she said. “We are only limited to one item and you have to be cognizant of your household—how many times you’re willing to go to the grocery stores.”

Goldtooth-Halwood said when she does try to buy in bulk others don’t take kindly to it.

“I went to Sam’s Club in Farmington and it was daunting,” she said. “Imagine all the people that give you those side eyes, thinking you’re hoarding.”

By the time this paper comes out the NB3 Foundation will have had its first shipment of boxes sent to Chinle through the Navajo Nation Community Health Representative, with whom the organization has partnered to distribute food boxes.

Goldtooth-Halwood said she will have been on hand to help with the operation.

“We wouldn’t do it on our own. We really need those people that were beyond our walls to help us,” she said. “Thinking about how we do that as individual staff members, that’s hard, it’s actually really stressful.”

Back in Albuquerque, Begay continues to work raising money and packaging boxes; last week they raised a total of $88,000 of their $100,000 goal.

Begay said he is thankful for the new and old partnerships that have stepped up to help in their efforts.

“I just want to thank our staff and the foundation because everybody volunteers, no one is required to do this. The wonderful CHR out at Chinle, who are working with families every single day, we would not have been able to do this as fast or effective without their guidance,” he said. “And just all the other Native athletes and celebrities … Shia LaBeouf, who’s Navajo, Jacoby Ellsbury, and others who have really stepped up to help us raise the money but also drive the message. The messaging is just as important as the money, it’s not just an effort that I’ve been a part of; all of these celebrities and athletes have not forgotten where they’re from.”

Begay’s investment in the effort to fight the spread of coronavirus has become personal.

Since the conference call that sparked his efforts, Begay said the virus has directly impacted his family.

“They’re sick. I got a handful of family members that are fighting the coronavirus, which is tough to deal with because they’re in quarantine. You feel pretty helpless in terms of being able to support,” Begay said. “(To the people) I would just say don’t lose hope. We have to continue to come together as a community and rely on who we are as Diné people, our spiritual beliefs, our traditions, those are the things that pull us through these tough times. We’ve overcome tough times in our history, this will be another one that we overcome together.”