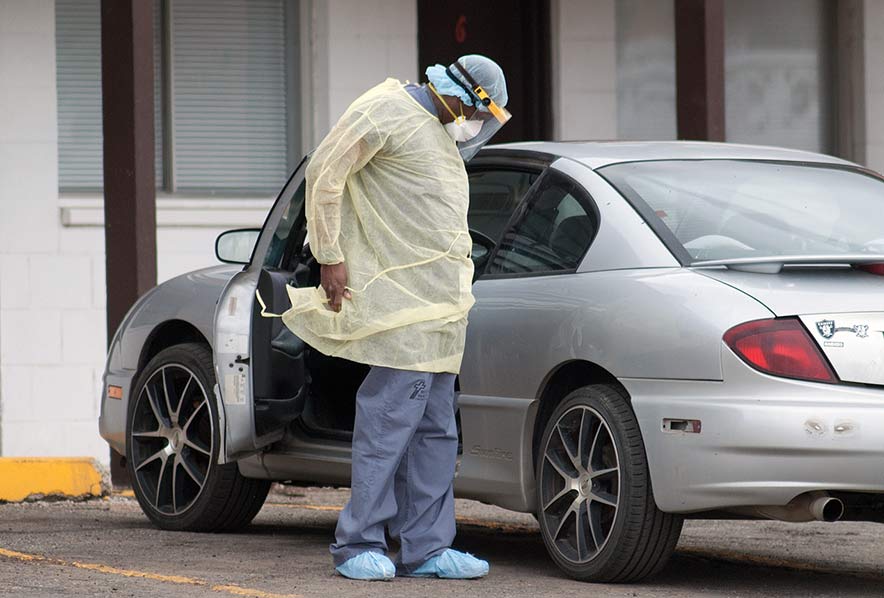 Navajo Times | Donovan Quintero
Proper attire for medical personnel treating COVID-19 patients consists of a gown, gloves, mask, shoe coverings and possibly a face shield like this worker is wearing. But hospitals in Western Agency and Flagstaff say they're running out of personal protective equipment and are forced to reuse some gear rather than disposing of it.

They are soldiers in the war against the coronavirus.

When they finish a shift on the COVID-19 ward and look in the mirror, they have a C on their nose from the N95 mask they wear all the time – deep marks left by the elastic bands.

Their eyes are tired and hair damp with sweat.

Before starting their shift, they have to put on protective gear: gloves, gown, a second pair of gloves, glasses, cap, masks, visor, shoes, shoe covers, and tape over tape to keep everything sealed.

But these supplies have dwindled and doctors and nurses at Tuba City Regional Health Care Corporation and Flagstaff Medical Center, the only Level I Trauma Center in northern Arizona, have improvised ways to make their stock last.

The lack of personal protective equipment, or PPE, is also imperiling the Valley Ridge Mortuary staff in Tónaneesdizí.

“I’d say our PPE situation certainly is day to day,” said Josh Tinkle, chief administrative officer for FMC. “Currently, our biggest need is isolation gowns. We are reprocessing and re-sterilizing N95 masks to continue to stretch that out a little bit.”

Tinkle said FMC has about a week’s worth of isolation gowns left. FMC’s current supply of N95 masks will last a little longer.

“Currently, our question right now, moving forward, will be isolation gowns and what we’re doing to mitigate that,” Tinkle explained. “Last week, we went and bought a lot of Tyvek HomeWrap and we’re having people in the community sew Tyvek suits for us.

“We’re trying to stay a few days ahead of everything,” he said. “I think we’re doing a great job of that so far.”

Tuba City Regional is also in urgent need of gowns, said Lisa Butler, the senior executive assistant to CEO Lynette Bonar. Bonar earlier this month sent out an email, including a pattern for isolation gowns, to hospital staff asking them to pass the message to area seamstresses.

The hospital is accepting shipments and donations. The hospital general services contact number is 928-283-2875.

“PPEs are very hard to come by,” said Michael Begay, funeral director and owner of Valley Ridge Mortuary. “I was lucky to get some face masks that I ordered like a month ago and it finally arrived (late last week) but they’re not the N95, but they’re still good masks. We need PPEs and we’re going through them pretty quickly.”

Begay, who’s also the only embalmer in Western Navajo, said he’s trying to find a vendor that can supply his mortuary, but PPEs are in high demand.

Dr. John Mougin, chief quality officer at FMC, said the hospital is in an area where people, the very people they serve, have stepped up and have sewn gowns out of industrial fabrics.

A company is also working on masks for FMC staff that are being tested now at the hospital, said Mougin, adding that Cline Library’s MakerLab, Northern Arizona University’s large-scale 3D printing environment, is working to print PPE masks for medical professionals in northern Arizona.

“We are using significantly more PPE than we ever did in the past,” said Flo Spyrow, president and CEO for Northern Arizona Healthcare. “The suppliers understand that demand and so, for instance, an N95 mask normally cost us 69 cents and now we’re paying $8 per mask for it.”

Spyrow said NAH typically paid 50 cents for surgical gowns and now is paying $5 per gown, which is a 1,000 percent increase.

“Not only we’re seeing revenue decrease in many of our profitable areas of service (that) have been put on hold, we’re paying significantly more for equipment that is vitally important for us to keep our caregivers safe and to prevent the spread of this infection,” Spyrow said.

Regular shifts are a memory

Frontline doctors and nurses in northern Arizona say it’s amazing how quickly everything has changed, and their research and clinic routines feel so far away. They miss their regular shifts because compared with what they’re dealing with now they were easy as pie.

More than 2 million coronavirus cases have been reported globally, according to data from Johns Hopkins University. The U.S. accounts for about 30 percent of those cases, with more than 600,000 nationwide.

Across the country, more than 26,000 people have died.

As of Wednesday, 33 have died in the Navajo Nation.

Northern Arizona doctors and nurses say there are days where one or more patients are taken off the ventilator and moved to hospice-level care.

“I think a lot of it making it stressful are that they’re taking care of one type of patient who all have the same type of illness,” said Dr. Derek Feuquay, chief medical officer for FMC. “It’s not normal for us to have this many patients on ventilators that are requiring this prolonged amount of ventilation that they’re requiring.

“It’s also a little different in that a lot of patients that we see that die are often older with a lot of medical comorbidities,” he said. “We’re seeing younger patients or people who haven’t had medical problems come in and require prolonged ventilation and watching those people on a ventilator for a long time is hard to watch.

“It’s very stressful,” he said. “And they also worry about bringing the stuff home to their families. And I think that’s something to worry people too. You just worry a little bit more and it adds to that level of stress.”

Feuquay said when a COVID patient is put on a ventilator their body goes through a lot as they develop respiratory distress. The patient, he says, usually comes in with common symptoms of an upper respiratory infection, which doctors and nurses are all used to seeing.

“But we see them develop severe respiratory distress requiring intubation,” he explained. “One of the things that we’ve been dealing with are those patients who are intubated and mechanically ventilated … and so you can do that in a various number of ways. You can use propofol (diprivan), a drug you can use to save people, but you also have to control people’s pain.

“So, you often use IV narcotic drips or (another form of IV drip),” he said. “We also have to use neuromuscular blocking agents to paralyze them, so we’re able to mechanically ventilate them and we’re finding that these patients are really burning through sedation and neuromuscular blockers at a higher rate than we would normally see in patients that are being intubated and mechanically ventilated.”

Mougin said he’s had conversations with frontline health care workers in Tónaneesdizí where there is an increasing number of cases and the ICU is full.

“So anybody they’re seeing that’s sick enough for hospitalization, they’re having to transfer to FMC (or to Phoenix),” Mougin said. “As of a few days ago, Tuba City said they were sending out three to five patients a day. They were anticipating because it was ramping up that they might be transferring out just from Tuba City as many as seven to nine patients a day.”

The Tuba City hospital sees an average of nine to 11 COVID-positive patients in the emergency room every day, said Bonar.

And two COVID patients are sent daily to either FMC or to a hospital in Phoenix.

TCRHCC, along with TCRHCC clinics Sacred Peaks Health Center in Flagstaff and LeChee Health Facility in LeChee, Arizona, has tested 317 people for the coronavirus since March 12. A total of 135 tested positive and 125 tested negative.

As of April 14, 17 people with presumptive COVID-19 are current inpatients at TCRHCC and 19 were stabilized and discharged home.

“On a positive note, patients are recovering,” Bonar told the Navajo Times. “We are still looking on the stats on this.”

Coconino has a total of 259 COVID-positive cases as of Wednesday morning, according to the county Health and Human Services.

“You’ve heard the term ‘flatten the curve’ over and over and over again,” he said. “And that will still be the most thing that can be done to prevent the needs of the health care system …

“We’re still hoping for the best and we’re counting on the individuals’ actions to lessen the needs of the health care system and keep most of the community safe,” he said.