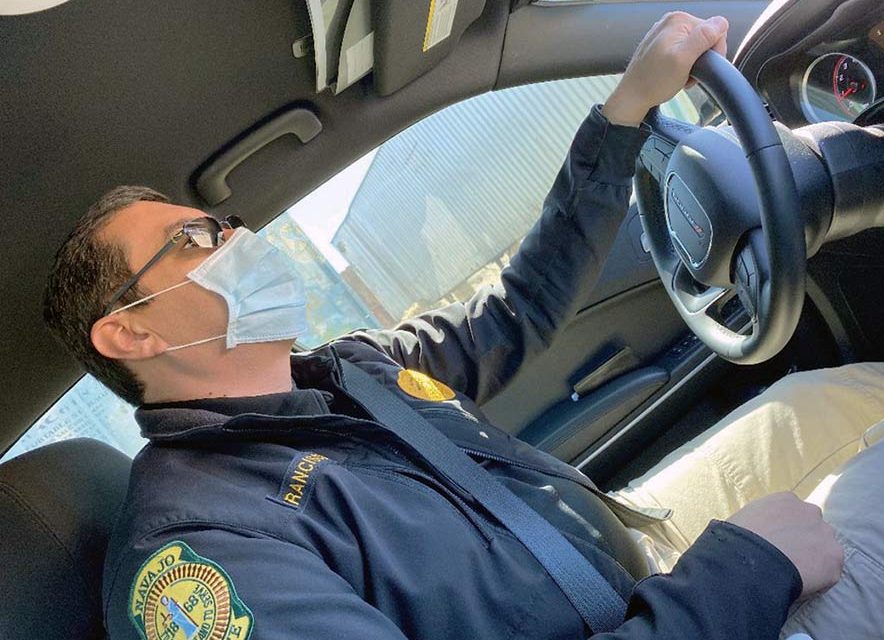 On a warm Friday afternoon, Navajo Nation Police Chief Phillip Francisco was in his police unit and on the phone with his office making sure food would be supplied to his officers.

In six hours the department’s largest-ever coordinated operation would be implemented in an attempt to slow down the spread of the coronavirus pandemic. The 57-hour curfew was placed on the entire 27,000 miles of the Navajo Nation.

“I think this is an unprecedented event that no one in the United States was prepared to deal with, especially law enforcement,” said Francisco. Before the curfew began last Friday, the case number was at 597 with 22 deaths. By Tuesday evening cases went up to 838 with 33 deaths.

Enforcement of the 57-hour curfew, as well as other orders made by President Jonathan Nez and Navajo Nation health officials, had been placed on the shoulders of Francisco and his officers.

The success of this pilot project gave Nez all he needed to order similar curfews for the next three weekends. As chief of police, Francisco made it clear that one of his major concerns and priorities is the safety of his officers. From making sure they get fed to trying to get them personal protective equipment, Francisco has rarely rested since the epidemic began.

He has also warned the public that if anyone purposely tries to expose officers to the coronavirus he will press charges. He also told the public to forewarn officers, emergency responders and dispatchers if they might have COVID-19 when they call for assistance.

It’s been almost a month since Francisco returned from Quantico, Virginia, after spending 10 weeks at the Federal Bureau of Investigations National Academy. When he left for Virginia the coronavirus was something foreign and far from the deadly threat hovering over Navajo that is has become.

Once he returned he was mandated to go in quarantine, which he wasn’t happy with since he had been away from work for nearly three months. “It was interesting how this virus progressed,” said Francisco in a previous interview. “When I was at the academy it was kind of an underlying ‘Oh this is something that’s happening somewhere in China,’ and then it progressed all the way to us.”

Before leaving for the FBI academy in January, Francisco looked forward to returning home because the fourth class would be starting the Navajo Police Academy, a once defunct academy that he brought back, with the help of Public Safety Director Jesse Delmar, the Navajo Police Department and the Navajo Nation Council’s Law and Order Committee. The academy was slated to begin in March.

But when he returned the Navajo Nation had declared a state of emergency, a shelter-in-place order was issued, schools had shut down, parks and recreation areas were closed and the executive branch had reduced workers. The only logical move was to reschedule the police academy.

As the days progressed and the number of cases began to soar on Navajo, more orders started to come down the line such as the 8 p.m. to 5 a.m. curfew, and then finally the 57-hour curfew.

“I have a lot of contacts with different law enforcement administrators from across the United States and even those jurisdictions is having a hard time implementing some of the recommendations and orders coming from their leadership,” said Francisco.

“Whether it is federal, state, county, local government, they are doing the same thing of having to adapt quickly to address the needs of the public and public health,” he said. “It’s very challenging for law enforcement because we still have to maintain order, and maintain our normal emergency services, but yet help support health orders that are coming.”

On Tuesday, it was announced four of Francisco’s officers and one support staffer had tested positive for COVID-19. According to Francisco, all the employees are self-quarantined and “doing OK.” None had to be hospitalized.

“Two officers are COVID-19 positive,” said Nez when it was only two officers that were reported to have tested positive. “As you know vice president and I are in self-quarantine because we were in close proximity to an EMT who tested positive. “Our first responders, our warriors at the front lines, are beginning to contract this virus and we need to stay home,” he said. “It is no joke.”

Regarding jails, Francisco isn’t in charge. Not much has been said publicly about how the Department of Corrections is handling inmates at this time of the COVID-19, especially as jails across the country are letting inmates go in order to prevent its spread.

Neither Nez nor Director of Corrections Delores Grayeyes responded to questions about jail facilities.

Grayeyes is also a part of the Navajo & Hopi Families COVID-19 Relief Fund headed up by former Navajo Nation Attorney General Ethel Branch. The Window Rock headquarters and jail and Shiprock jail are only being used as booking facilities before inmates are transferred to other jails because these jails are still dilapidated and riddled with asbestos and mold.

For years now Navajo politicians have announced that funds were being pursued or locations were being scoped out to build new police and jail infrastructure.

“Department of Corrections has been planning way back ahead,” said Delmar. “What they did with the courts and prosecutors … they want to reevaluate those who have health issues and are currently in custody, and depending on their charges as well, and try to purge them from the facilities.” The Tuba City, Kayenta, Chinle and Crowpoint jails are operational.

Delmar said Grayeyes has a protocol on screening inmates and employee protection is priority. “The director said she is working closely with the chief of police on booking matters,” said Delmar. “We are working with all the criminal justice system in place on Navajo in trying to control this as best we can.”

“There is currently no blanket release order from the courts,” said Francis. “Cases involving the release of incarcerated defendants come before the court after a filing is made. “These cases may be filed by the Navajo Nation or may be filed by a defendant,” she said. “Rulings are made by judges at the district courts based on the laws and the facts in a particular case, and each decision is made on a case-by-case basis.”

Francisco said with the resources they have he believes they did an exceptional job trying to contain the virus, but now that the Nation is beyond containment the police department is going to look toward mitigation. “My personal opinion at this time is we did a good job at trying to contain it,” said Francisco. “We were pretty quick and aggressive with containment. But just the way our culture is with a lot of family members living together — we are communal and we have a lot of gatherings — it just happened to get out of containment quickly.”

Some see the transient population that walks around the flea markets, grocery stores or roads as a hazard and have asked Francisco why they aren’t being addressed. “The public thinks the police can take care of this problem,” said Francisco. “In reality it’s not a criminal problem. It’s a social, mental health and substance abuse issue that myself and my department have been trying to look for other solutions.”

He said the solution isn’t jail, but rather getting Social Services and the Department of Behavioral Health to get the judges and prosecutors on board to get the transients out of the cycle of being arrested and going back to the street.

“The jails are at half the capacity right now because they released a lot of people… so they wont be spreading the virus,” said Francisco. “Corrections is being stringent on who we take into jails. Plus if they’re just walking around and not in facilities, the store or in a large groups, taking them into custody will cause more harm than good to public health.”

The Navajo Nation Police issued more than 115 criminal nuisance citations for curfew violations during the 57-hour weekend curfew. Seven police districts with over 120 officers contributed to the curfew operation efforts. “We are fighting an invisible enemy,” said Francisco. “The only way to defeat this enemy is to stop it from spreading. Curfews are one of the few weapons we have available to fight this virus.

“Sooner we all come together and defeat this virus by not giving it a chance to spread, the sooner we can rescind these curfews and resume our normal way of life,” he said.