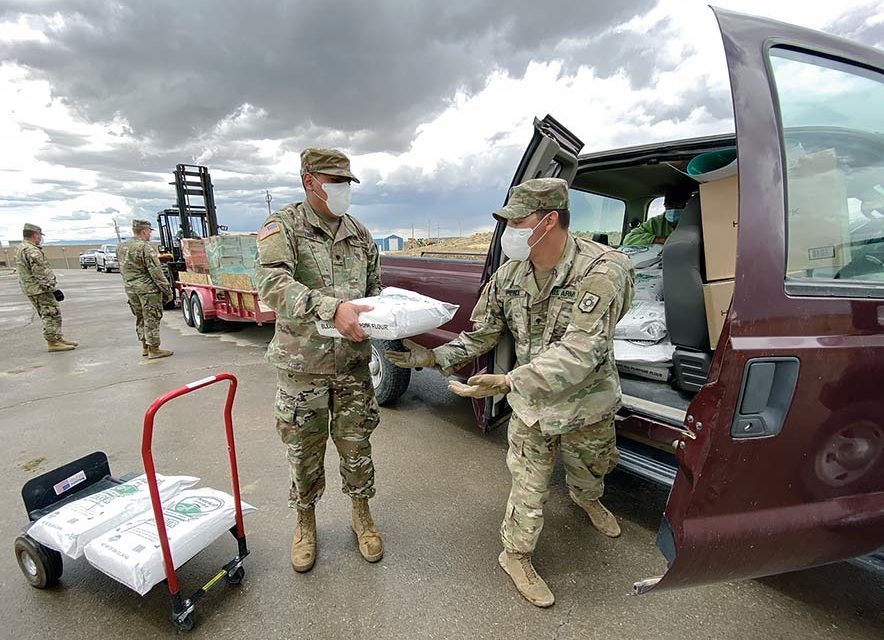 More than 1,000 families in the Eastern Agency can continue practicing social distancing and staying home, thanks to the New Mexico Army National Guard and the Tse’ii’ahi’ Strike Team.

An army of volunteers working in support with the Joint Task Force COVID team made 95 pallets made up of pinto beans, onions, potatoes, apples, oranges, and bags of flour. They worked around the clock at the Rio Rancho Armory in Rio Rancho, spent their weekend breaking down bulks of food and repackaging, then transporting the boxes to Church Rock, Red Rock, Rock Springs, Sheep Springs and Standing Rock.

The food was then picked up and taken back to the chapters where they would be distributed to chapter residents. Bernice Sage with the Navajo Nation Special Diabetes Project, also a member of the Tse’ii’ahi’ Strike Team, busily wiped down boxes as guardsmen and guardswomen used a forklift to unload the pallets.

Sage said the pallets of food were going to be picked up by officials from as far away Torreon. “We’re putting it all on the chapters, so they can come and pick it up,” Sage said on Monday. “We don’t have to take it to them. They’re all getting fifty-five boxes of food each.”

Fellow team member and Tse’ii’ahi’ Chapter President Johnny Johnson said the team is on hand Monday through Friday, from morning to sundown, giving out the donated foods that has been coming in on a steady basis since the COVID-19 outbreak. “We deliver food to our community members, that is our work, Johnson said, who has served as chapter president for almost 20 years. “We don’t have much but we give out all the donated foods that comes to our chapter.”

Johnson said his chapter was focusing on the elderly, single parents with children and residents who don’t have transportation to go to a grocery store. “What we have leftover after, we give it out the food to the rest of the community,” he said. To date, Navajo Nation communications director for the president’s office Jared Touchin said so far the team has given out more than 5,000 items across the reservation.