A love for soccer: Diné dreams of playing as a professional 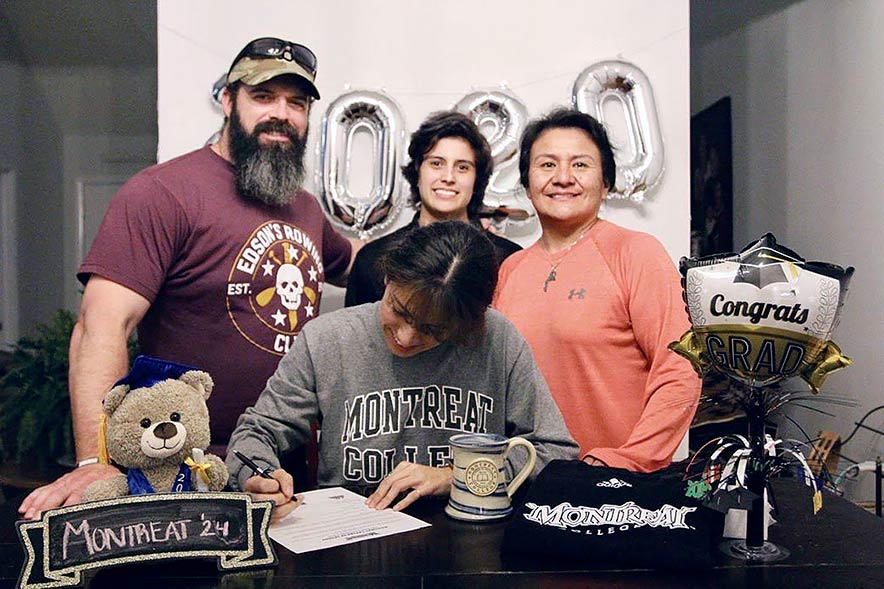 Submitted
Diné athlete Caitlyn Stevens (center) signs her letter of intent to play for the women’s soccer program at Montreat College in Black Mountain, North Carolina. She is picture here with her parents Jeff and Carol Stevens and older sister Sadie Stevens.

Before she fell in love with soccer Caitlyn Stevens did gymnastics, softball and lacrosse.

Those sports didn’t really stick with her as much as soccer did. In fact, the North Carolina Diné teen has professed that she’s been playing the sport all her life.

Caitlyn is the daughter of Jeff and Carol Stevens with her mom having roots in the Burnside, Arizona, area.

Her parents met while Jeff was stationed at Kirtland Air Force Base in Albuquerque in the late 1990s and they have been married for 21 years. The Stevens have two daughters, Sadie and Caitlyn, and they reside in Pinehurst, North Carolina.

“I live near the beach and Montreat is up in the mountains,” she said. “When I visited it was so pretty. All of the buildings were made of stones so that was one of main attractions.”

Of course, being offered a huge scholarship was also an underlying factor too as Caitlyn is going pursue an exercise science degree in hopes of becoming a sports physiologist.

“We’re extremely proud of her,” Jeff said. “Her mother and I are very proud of her. Neither of us went to college right after high school. I didn’t finish college until much later in life.

“We’re very proud of her for taking this step,” he said, “to come right of high school and earn a scholarship, which is a big deal with education being so important and so expensive.

“It hard for a lot of families to afford a good education in college so we’re proud of her to utilize soccer as a tool to educate herself more,” he added.

Caitlyn credits Sadie for finding her passion as her older sibling got her started.

“My sister fell in love with soccer and I kind of wanted to follow in her footsteps,” Caitlyn said.

Nonetheless, she admits that she hated the sport at first but with her parents’ encouragement, Caitlyn found a desire to excel in the sport.

“I fell in love with it and eventually my parents put me on a traveling team when I was 13 years old,” she said.

The Stevens family traveled to every corner of the state for both sisters to play club ball although they didn’t play on the same team.

By playing on a traveling team, Caitlyn said she’s learned a lot about the game as she learned new skills. It also exposed her to college recruiters with North Carolina being one of the hotbeds for soccer players.

“The sport has grown so much around us,” the Pinecrest High senior said. “There are soccer schools pretty much everywhere you go.”

Caitlyn said there is a big difference in travel soccer than what you see at the high school level.

“As soon as we entered travel, my parents and I had no clue what we had just entered into,” she said. “We played in a lot of tournaments and we did a bunch of camps.”

At one of those camps, Caitlyn worked with soccer icon Mia Hamm.

“Mia is one of the top soccer scorers in the world,” Caitlyn said. “After she retired she started to travel around the world to help other kids.”

Caitlyn said it was surreal to learn lessons from Hamm, especially with it being in her hometown of Pinehurst.

“It was unbelievable,” she said of that experience. “It was on our local field, down the street from my house.”

And while she gained a lot of experience on her traveling team, Caitlyn said she was looking to finishing out her senior season with her high school team.

As a postseason contender, she said the Lady Patriots were expected to make state this season as her high school team got as far as the Final Four the previous three seasons albeit Caitlyn opted to be home-schooled last season so that she can concentrate on her traveling team.

“We had a good team but the coronavirus happened,” she said. “It’s very sad, especially as a senior. As one of the older players it’s a big deal because I wanted to pump up the younger girls to try their best and win as many games.”

Since the cancellation of the high school season due to the COVID-19 pandemic, Caitlyn said she’s staying motivated with the help of her sister.

“Growing up, my sister and I were physically fit,” she said. “We were always taught to eat clean and keep our bodies well trained. I think the most encouraging thing for me is being able to play in college, that’s my motivation.”

With her sister set to join the Air Force Academy sometime soon, Caitlyn said she has someone to help her stay fit.

“We run along the reservoir and one of the biggest things that my sister and I love to do is boxing,” she said. “It really good with your agility and speed. It helps with your coordination.”

As one of the fastest players on her traveling and high school team, Caitlyn is hoping to leave her mark at the NAIA school as a winger.

“I do a lot of running to either score or help other girls in position to score,” she said of her position, while noting that she prefers the former over the latter.

“I love scoring,” she said. “That’s one of the reasons I play up top on the wing side.”

With a passion for the sport, Caitlyn said she’s dreamt about playing soccer professionally.

“That’s the big dream,” she said. “Just playing soccer has led me to wanting to make some money from playing soccer. Earning this scholarship will keep me involved in the sport.”

And if she doesn’t make it professionally, Caitlyn said she’s going to use her degree to help grow the sport as a coach and mentor.

“I hope to stick to helping women’s soccer whether it be for a club or college sports,” she said.