Divide between branches a factor in spending CARES Act $600M 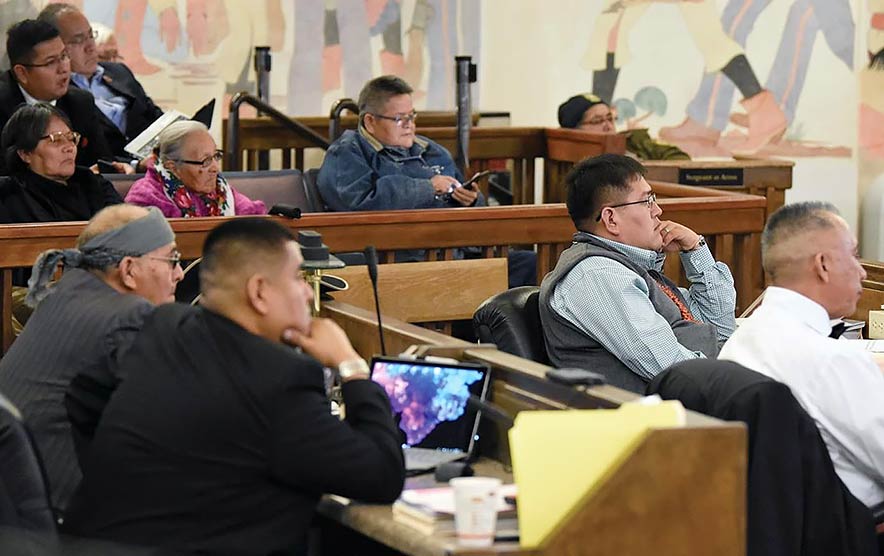 Divisiveness between the legislative and executive branches could hinder the process of spending the $600 million from the CARES Act.

This first year of this administration has shown disagreement between executive and legislative. While President Jonathan Nez has exercised his veto power, the Council responded with override votes. These were a few examples of the tension brewing between the two branches.

So considering the Nation has seven months to spend these dollars and with predications and warnings of a second wave of COVID-19 happening in the fall, there isn’t time to “play politics,” said Nez.

“Let us come back together and refocus on the needs of the Navajo people, all of us leaders,” said Nez. “This is a three-branch government.”

Regarding the bill the Council had dropped a day after the controller’s office reported they had received the dollars, Nez said the legislation was done in haste and although they didn’t receive a copy of it, they are analyzing it.

“We see there needs to be improvement to that legislation,” said Nez. “Right now it’s unworkable the way it is. You are putting federal guidelines into a Navajo bill. If you do that you tie your hands to what those criteria’s are.”

He also addressed the $600 million and where those funds could go.

“I think we have a lot of families where kids are watching themselves right now,” said Slater. “Both parents may be in quarantine. They may be in the hospital. We know this anecdotally. We have no data collected or distributed to our Council by the executive branch.”

This is a segue into funding summer enrichment programs for students that could steer them into learning traditional agriculture using new technology to address the food scarcity on the Navajo Nation.

“We have young people who want to contribute to their communities but aren’t provided the resources,” said Slater. “If we could merge agriculture and education in summer enrichments, we can do experiential education and try provide more food security for our communities.”

But when it came down to it, Slater said he doesn’t believe spending these funds by the designated deadline can happen, so he asked for an extension or waiver of this date “due to the special relationship” between the federal government and tribes.

Although his vision for funding going toward agricultural projects and telecommunication lined up with Nez, water-line projects weren’t as agreeable.

“Can we get a lot of water projects out,” said Slater. “Maybe. Maybe not. That’s a clear use of the funding. It’s critical we are realistic in this process.”

Stating how the command center and Nez gave themselves full control over the response on Navajo concerned him, as well as being a source of frustration at how center has been operating.

“The information provided from the Health Command Operation Center does not align… with the more granular detail that we’ve seen from state health agencies, county health agencies,” said Slater. “Does the Nation have a grip on this? Why are all these outside relief groups raising all this money? Does it mean the government is not able to perform the job we’ve entrusted in them?”

Knowing chapter by chapter which has been infected by COVID-19 is information needed, but no strong explanation has ever been given as to why this information hasn’t been disseminated to Council, said Slater.

With no clear sign of communication happening between the two branches, and with a large sum of money needed to be spent, and a whole Nation needing assistance in order to combat coronavirus, it will be interesting to see how Navajo leaders will be able to resolve differences and spend the money agreeably for the benefit of the people.

“I’m afraid if we don’t come to an agreement right away it’s going to jeopardize the funds,” said Law and Order committee member Edmund Yazzie. “As many vetoes we’ve been doing, as many overrides we’ve been doing, we really need to push that aside because we are fighting a monster. We need to get along and work this out.”