Workers say division of aging, health not protecting them on front lines 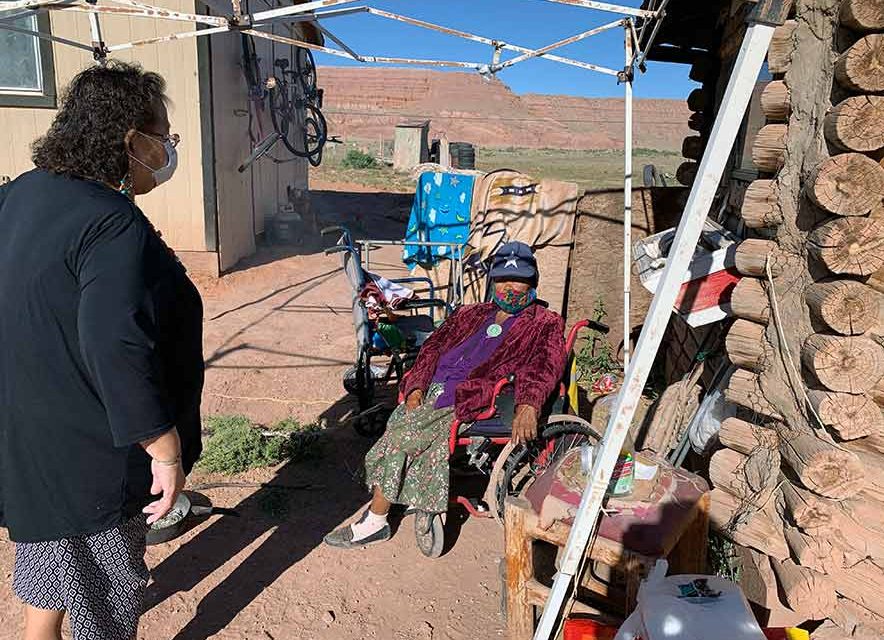 Navajo Times | Cindy Yurth
Chinle Senior Center Director Mildred Kee, left, maintains a safe distance as she chats with Ella Begay Tsosie after dropping off a food basket prepared by local volunteer group Chinle Planting Hope. Kee said she and her staff finally got a delivery of facial masks and gloves from the Division of Aging and Long-Term Care Services this week. Before that, they were using masks donated by Chinle Planting Hope.

“At times I think, what is this division of health waiting for?” said Sadie Benally, Teec Nos Pos senior center supervisor. “Are they waiting for employees to get infected first before they open their eyes and do something?” While they received a small supply of nitrile gloves early on, they say that has been insufficient and no PPE has shown up since, particularly facial masks, now required by the Navajo Nation.

While supervisors say they are devoted to their elders, they are devastated that the Division of Aging and Long Term Care Services has failed to provide adequate protection for front line workers.

“The Division of Health does not care for employees is the way I see it,” said Benally.

Cove Senior Center Supervisor Alberta Begay, who is presently in quarantine due to exposure to an elder who died, said she was very upset to see President Jonathan Nez on Facebook this week handing out masks while the senior centers still haven’t received any.

“And he couldn’t spare any for DALTECS employees!” said Begay. “What about us?!” The situation has left supervisors anguished and fending for themselves, seeking outside donations and even reaching into their own pockets to try to stay safe.

“We sent out email after email with no response,” said Begay. “I’ve written all the way up to upper management and the president’s office. I think it just falls on deaf ears.”

Begay said she finally resorted to making her own masks. “That’s what we’ve been using but that’s not medical grade,” said Begay. To add insult to injury, supervisors say instead of offering support, their management is “nitpicking” the hours of senior center workers.

“I’m like, what the hell, what about all the Navajo Nation employees who aren’t even working and getting paid?” said Frank Smith, Sanostee senior center supervisor and chapter president. “It’s frustrating,” he said. “We’re out here working with elders on a daily basis and they’re sitting in their office complaining about our time.”

Begay said because she and her cook are quarantined, the Cove center is closed. “Our lives our precious too,” she said. “We need that protection. Yes, we have compassion for the elders and we’re doing the best we can, but we’re risking our own lives too.”

Begay added the burden of proof that she was exposed to a COVID-19 positive person fell on her in order to get approval from aging division head Leonora Henderson to go into quarantine. “It just burns me up,” said Begay.

‘This is a pandemic!’

Smith says all of the stress and the mental fatigue is taking its toll. “Our (COVID-19) numbers have jumped up,” he said. To compound the problems, Smith said a great stigma and shame exists for many who test positive for COVID-19, so instead of getting support, many people try to hide their status.

“People are not being honest about it,” he said. “They have too much pride and they’re ashamed of it.”

Smith has seen people who’ve been quarantined out and about, he said, and there isn’t a system in place for tracking individuals and families who’ve been exposed.

“This is a pandemic! Everybody needs to know so that they can stay safe,” said Smith. “If we don’t, this thing’s just spreading like crazy!”

While the aging division’s program doesn’t provide protections for staff, they keep telling them to go to work yet there has been no talk of hazard pay, said Smith. “They don’t realize what we go through,” said Smith. “It’s crazy! When we go home we have to worry about who we were in contact with. We wonder, are we taking it home? We have families and kids. What about them?”

He said elders have been told to stay home and yet some come to the senior center to pick up food in to-go trays. Elders at high risk are sent home deliveries. The Sanostee center has also been giving out boxed food, money for groceries, wood, and hay, he said.

Smith said the lack of communication or guidance from management has been a big issue and the aging division’s Shiprock agency supervisor Jonathan Tso does not respond to their requests. Meanwhile, Smith said Tso keeps saying don’t talk to reporters and only go by the “chain of command,” not directly to Window Rock.

Tso told the Navajo Times he, too, is not allowed to talk to reporters by a directive from Division of Health Director Dr. Jill Jim.

Aging division head Leonora Henderson told the Navajo Times that any media inquiries need to go through Jim. A request to Henderson for an updated list of senior center closures did not receive a response. Jim, who also leads the command center with David Nez, has not responded to numerous phone calls and emails from this reporter. “They don’t want things like this to get out there,” said Smith.

‘Playing it by ear’

“What we’re told from our department is we’re supposed to be working as essential employees, but from the start we were not given any PPE, hand sanitizers, Clorox,” said Sadie Benally.

Benally said her center distributes about 1,000 meals per month. When the emergency declaration was made in March, the Division of Health promised to keep the senior centers up to date on everything that was going on with the pandemic, but that has not happened, said Benally.

“Dr. Jill Jim, we never see her,” she said. “Why doesn’t she talk her own language to her own people? They don’t know what’s going on down here at our level. We’re just a scapegoat out here.”

She said although some senior centers in the area are closed due to coronavirus exposures, neither the Navajo Health Command Operations Center nor the Division of Health have come down to bring PPE or follow up with employees.

“We have no information,” she said. “They don’t even pinpoint the area if there’s a case here so we can be alert. We’re just here, playing it by ear, every day.”

She said when they call the command center directly they can’t get answers either. “They just tell us to shut up and go through the ‘chain of command’,” she said. “I think as essential employees, we have every right to know because we’re dealing with the general public.”

Benally said that some elders show up to pick up food with no masks on, and many are coming from other communities. “There are a lot of people in this area who are getting infected,” said Benally.

While delivering to homebound elders or offering drive-up to-go meals, her staff does their best to protect themselves, she said. “We just don’t know,” said Benally. “We take chances out there.”

Benally said she’s scared because she has grandkids at home. “They are not replaceable,” she said. “I do not want to go home and send this virus to my family.”

‘My employees are scared’

Shiprock senior center supervisor Navina Kinlahcheeny said because they never received adequate PPE she resorted to getting funding and supplies from other sources, including her own pocket, the chapter, and the New Mexico National Guard. She said a lot of people in her area have not been staying home and are out without PPE.

“My employees are scared,” she said. “Navajo Nation policy states we have a right to a safe working environment. I think the Nation has to figure this out and maybe get us all tested. Who’s going to monitor the spread?”

In an April 22 email to Jonathan Tso, Kinlahcheeny stated, “The command center has never asked us about our concerns or feedback on anything. They do not give us any direction or updates. We feel like sitting ducks during hunting season.”

Kinlahcheeny said she’s been asking for a protocol for followup if someone has gotten sick and has been serving the public, but she hasn’t gotten an answer. “Are they notifying through the hospitals?” asked Kinlahcheeny. “There’s really no protocols in place. We were never briefed as supervisors.”

Command center response
“The Navajo Nation emergency command center operates on priorities,” said the command center co-director, David Nez. Nez stated his operation protects senior center employees by providing them with “PPEs, training, and CDC information on how to do their services.”

He explained that the command center relies on CDC, state, hospital and other established guidelines, best practices and policies related to COVID-19. “It’s not something that we’re reinventing,” he said.

As far as protocols for handling COVID-19 positive individuals, he explained that responsibility falls on the hospitals. “If anyone on the Navajo Nation, including employees, gets symptoms of COVID-19, based on the public health orders, they should immediately contact their health providers and from that point on they will be given instructions by the hospitals,” he said. “Most likely, the hospital will ask the individuals to come in for testing.”

Nez said if someone tests positive at the hospital, then an epidemiology team makes a referral to a surveillance and investigation team that carries out interviews and contact tracing. When they identify people who might have been exposed, those individuals are asked to self-quarantine for 14 days even if asymptomatic and “at some point” they will be tested to see if they are positive or not, he said.

If a person exposed is within a senior center, a cleaning crew is brought in to sanitize the center, said Nez, adding that they try not to shut down any facilities, if possible.

Nez confirmed that the command center does not share information that breaks out numbers of COVID-19 cases by chapter in order to protect impacted community members, although they do track that information internally.

He acknowledged that early on PPE was in short supply because vendors were on back order, and some of the resources were redirected to hot spots like New York and California. Vendors are now getting caught up on PPE supplies and shipments are coming in to the command center warehouse, he said.

Nez was adamant that the command center did do follow up with senior centers and that every center that is open has received masks. “What I’m saying is they have masks,” said Nez. “I know they have masks. We get those requests here, and those (senior centers) are on the distribution list.”

Meanwhile, Alberta Begay said that none of her managers from the aging or health divisions nor hospital medical staff or a tracing team have reached out to her in quarantine to ask her how she’s doing or offer assistance. After being denied testing at Shiprock IHS for being asymptomatic, she’s had to find out how to get testing on her own and is waiting for results, she said.